Book of Beyond: Psionic Paths 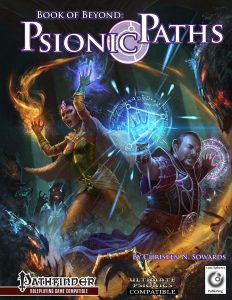 This installment of the Book of Beyond-series clocks in at 39 pages, 1 page front cover, 1 page editorial, 1 page ToC, 6.5 pages of SRD, leaving us with 29.5 pages of content, so let’s take a look!

All right, after a brief introduction to the concept of power source origins, we start with lists of psionic powers, organized by classes, then levels. Particularly fans of the cryptic and dread will be rather happy to note quite a bunch of material for their classes. It should be noted that different classes might have different power point costs for the powers herein. Why are source origins relevant? Well, for example, disruption shield nets resistance bonuses to saving throws versus effects from a given source – the augment btw. allows for additional source origins to be specified, increase the bonus, or manifest the power as an immediate action. Duality lets you select an additional source origin, making your psionic abilities count as though drawing from that as well. What about imprinting a spell from one spellcaster to another sharing the same source? Or care for source interdiction, which locks out one source? Yeah, the latter in particular makes a lot more sense to me than the default flat antimagic shield. But I’m getting ahead of myself.

Let’s take a look at more of those powers, shall we? Actify penumbra lets you lace shadow plane effects in shadow creatures, shadow spell- or fear-effects, and on the following round, damage caused by the targeted effect or creature takes 2d6 additional damage; shadow creatures also get a boost to saving throws and natural armor – the boost to saving throws is not properly codified regarding bonus type, but the power does come with two different augments. Very cool, on the other hand – amplified occlusion targets a creature and makes it perceive cover etc. as larger; astral epiphany nets a summoned creature a combat feat for which it qualifies, and with the augment, you can add feats on top of that, using the original feat granted by the power as a prerequisite for the follow up feats. HOWEVER, these follow-up feats RAW do NOT qualify for further prerequisites, so you still can’t get an entire feat-tree this way.

There are also some tactically potent high-level tricks herein, like astral redirection, which allows you to redirect spells, powers and supernatural ability with a touch range. I love this, though its per se precise rules-language is missing an “if”, which can render understanding it a bit tougher than it should be. This is, alas, not the only instance of such a glitch: In the next power, we have a “level” missing – it might be obvious what “1st astral construct” means to some, but I can also see this cause confusion. Diversify summons is an interesting one that lets you change summon monster/nature’s ally critters called forth, with augments allowing you to affect higher spell level versions. I like it, because it can be used defensively and offensively, and the augments allow you to take control as well – and yes, unwilling summoners get a save. What about using summoned creatures to erupt with force damage. This can be very, very strong when handled in a smart manner, but is solidly situated and requires setting up.

Autoarchive is interesting, in that it allows you to engrave a SPELL (not, that’s not a typo!) Spell Mastery style in the astral plane – and this can be [Network]’d, and with augment and power points expended, you can overwrite your prepared spells with encoded ones and encode higher level spells. What about cleric/oracle-specific buffs? Yeah, notice something? These powers don’t operate exclusively in the psionics paradigm – they are explicitly designed to provide interesting interactions with other classes. What about the immediate action dweomerfreeze, which lets you suspend spell effects with a proper manifester level check– and personal spell effects may be defrozen; this can allow for some serious cool tactical combos. This is so cool, save that it should probably specify that the manifester level check is against the target’s caster level check, or 10 + caster level. RAW, the check is against the caster level, which is ridiculous and would allow even a mid-level character suspend a level 20 caster’s effect. Then again, that MAY be intended, considering it’s a 4th/5th level power, so in dubio pro reo applies.

Speaking of interesting: There is a psionic variant of mirror image, called dusk duplicants – the interesting thing here, beyond augments, is that there is another power that allows you to lace spells or powers in your duplicants, which release upon the duplicant’s destruction. In the hands of tactically-minded, clever players (or NPCs!) this can be gold. Speaking of which: What about an echo-class style mimicking of effects, save that it’s a quasi-real [shadow]-version? Or what about a shadow-based blue magic style ability that is strenuous on the manifester, but lets you gain low-CR supernatural abilities? Indeed, the themes of light and dark add a unique dimension here: With echoed illumination, you can target a shadow magic effect, and generate an illumination double of the effect – the less real the shadow effect, the more real the illumination effect will be: If a shadow effect, for example, is 30% real, the illumination double will be 70% real. This is potent, and another example of unique combo tricks championed herein. Super interesting: There is a power that lets you gain an idea of a proposed course of action for one round, making future shadows one of the most GM-friendly and yet super useful clairsentience/divination effects I’ve seen in a while. Kudos!

Cool: What about a low-level means to get psychoprosthetics? That power is so cool, I think it could carry its own archetype. Using power points to replenish your ally’s spells, scattering senses to see through multiple realities…did I mention the massive 4 shadow infusion powers? These can instill descriptor-based weaknesses, decrease how real targets are, erode their defenses, etc. What about rendering incorporeal targets corporeal? Or what about forcing a transitive plane to overlap with yours temporarily? Or what about making effects less real? This is a pretty damn awesome selection of powers.

Editing and formatting on a formal level are okay, but not impressive – I noticed a couple of typos, missing single words, etc., some of which rendered the rules slightly harder to grasp That being said, on a rules language level, the book fares MUCH better, and manages to juggle high-complexity concepts with more panache than you’d expect. Indeed, apart from nitpicks, this book does a pretty good job in that department. Layout adheres to the series’ two-column full-color standard, with a few rather nice full-color artworks included. The pdf comes fully bookmarked for your convenience.

Christen N. Sowards never does boring or redundant – and this holds true herein more than I expected it to. This book provides a broadening of psionics in themes, with particularly the transitive planes becoming more important; the source mechanics, as noted before in my reviews of Lost Spheres Publishing books, makes sense to me as well. The powers herein are rarely straightforward – and are better off for it. These are made for tactical combo gameplay and emphasize the tactics of the party, emphasize cooperative aspects of the game, and I genuinely love seeing that. Conversely, the power level of these powers is often very much contingent on the system mastery of your group: In the hands of the right group, these can deliver devastating, brutal combos; that being said, you’ll have to work for those. There is a great reward ratio for smart players here, and while powerful, I personally really, really liked this book.

If this had received a thorough sanding off of its rough patches, this’d be a 5 stars + seal of approval file, but as provided, I can’t go higher than 4.5 stars. If you don’t mind the typos and small glitches, round up; otherwise, round down. Personally, I’ll round up due to in dubio pro reo, and due to plenty of these effects making me come up with some seriously cool strategies for my adversaries…

You ca get these psionic powers here on OBS!

You can get the entire subscription here on OBS!

If you’re enjoying my reviews, contemplate leaving a donation or joining my patreon. It keeps the lights on.