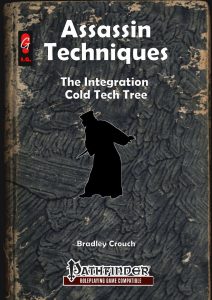 The expansion for the glorious Assassin-class clocks in at 5 pages, 1 page front cover, 1 page SRD, leaving us with 3 pages of content, so let’s take a look!

This pdf features a new cold technique category for the momentum-based assassin, namely the integration category, which can be summed up as deep cover, social engineering, etc. The techniques within this category include having civilian contacts: Basically, you have friends that can provide a variety of benefits and for every four integration techniques you know, you’ll get an additional contact. The contacts themselves, beyond offering obvious roleplaying potential, are codified in 11 basic roles: Alchemist nets you a discount with less expensive alchemical items and firearms and allows for low-cost renting of the lab; aristocrats net you access to proper social events, beggars can discreetly keep tabs on your targets, fences can get rid of problematic items, guards keep you in touch with the watch’s notes…you get the idea. The technique is certainly fun and makes for great RPing – and if you’re inclined to run solo-campaigns/adventures, it helps there as well. One further technique allows you to relocate contacts once every 3 months, which is pretty cool as well!

Having a good cover story is represented by skill bonuses and limited SPs to cast (scaling at 9th level included). Swift action -1 presence change intimidation is nice. 8th level assassins may become immune to fear. Investigate mark deserves mention: Upon researching a target, you gain temporary techniques, but only versus the target. You may only have one target at any given time and the effects last 1 week or until the target’s vanquished. At 5th level, you get to choose an additional target, against whom you gain 1 technique. As a -2 presence change technique, killer’s ritual lets you choose an alignment and nets you protection against the chosen alignment for a pretty long time. Memento lets you take a memento of the target slain, hampering magics that seek to return the target to life, with 12th and 18th level yielding further mementos. Paladin proofing rocks – it permanently conceals you with undetectable alignment and 6th level lets you simulate a selected alignment and at 12th level, you may even be treated as the alignment you mimic for spell and ability interaction purposes.

Silver-tongued rogue nets you a scaling social skill bonus when not in combat and Sweep the Room, at -1 presence change, lets you, as a full-round action, be treated as though you had taken 20 on a Perception check – amazing when hunting trap-master style characters that can litter traps behind themselves. Unfazed by Death mitigates being nauseated by gore etc. to being sickened instead and unfazed by foulness provides immunity to inhaled poisons and SR 10 + class level versus spells with the death descriptor. Finally, there would be the 10th level technique The Watson, which nets you an assassin contact, whose technique loadout is exactly opposite to yours. The Wtason has 2 character levels less than you do and is treated as a kind of cool complementary cohort. Watson may be a cross-specialization technique and is not replaced upon dying – the guy must be resurrected. And no, does not stack with pre-existing cohorts. Minor complaint: “Special:” is not bolded.

Editing and formatting are very good, I noticed no serious hiccups. Layout adheres to Interjection games’ two-column b/w-standard and is as elegant and nice as we’ve come to expect. The pdf has no bookmarks, but needs none at this length.

Bradley Crouch’s assassin expansion is pretty damn cool – it provides some of the social components that we really wanted to see for the class. The base class was phenomenal, but more than that, this very much made me want to play a solo-campaign with an assassin-PC…though I should mention that the contacts work just as well with a group, mind you, particularly in an intrigue-heavy game. And we get all of that for a single buck. This is a great expansion, very well worth the fair asking price. My final verdict will clock in at 5 stars + seal of approval.

Missed the phenomenal momentum-based assassin-class? You can find that one here on OBS!