Animal Races: Dawn of the Carnosaur

Animal Races: Dawn of the Carnosaur 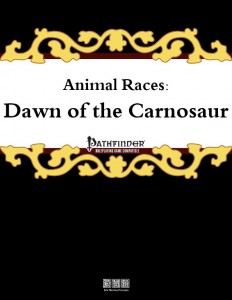 Once, a great and terrible empire existed, one ruled by the saurians – but it fell and so did the carnosaurians, who resemble humanoid carnivorous reptiles (surprise!) – in an interesting take on the T-Rex stereotype, only inbred royals were supposedly afflicted with small arms…and yes, this shows awareness of recent discoveries, including mentioning of plumes. Society and relationships with other races are covered alongside detailed age, height and weight tables.

Carnosaurians may be medium (+2 Str, -2 Int) or small (+2 Dex, -2 Str), have the reptilian subtype, normal speed (20 feet for small ones), low-light vision, scent 5 ft. (increases to 30 ft. at 6th level), a primary bite attack at 1d4 (1d3 for small saurians); they begin play with +1 natural armor that increases to +2 at 10th level and three racial heritage clans to choose from. The Allosaurus clan provides +2 Cha and may select Allosaurid Heritage as a fighter bonus feat; the Maniraptor clan +2 Int (and may use Int instead of Wis for monk class features) and may select Coelurid Heritage as a monk bonus feat. The Megaraptor clan gets +2 Cha and can select Coelurid Heritage instead of a rage power.

So, what do these Heritage feats do: Allosaurid Heritage provides one of the following racial tricks: Claws, fast movement (+10 ft.), faster movement (+10 ft.), improved bite. Once you’ve covered all of these via taking the feat multiple times (you may do so once per two levels you have), you may choose gripping bite, pounce, primeval mind or rake. Coelruid Heritage works similar and offers fast movement, faster movement, improved bite, leap and talons as choices. After covering these, the feat offers improved talons, leaping charge, pounce and primeval mind. In case you’re wondering: Primeval mind provides +2 to Will-saves and makes you immune to charm effects – the other options should be familiar.

Now, as has become the tradition with this series, we get neat information on genealogy and folklore, tying the race to specific creatures and enhancing thus organic immersion, while also providing information on their deity, the failed and deceased god Anzu. The default assumption is certainly that the empire has failed and fallen, potentially eradicating this clan – but nothing is forever, right? I mentioned those degenerate tyrants – well, there is a CR 3 statblock provided…and a CR 13 lizard tyrant lich included in the deal, though we don’t get the unique two-sided traits based on heraldry this time around.

Editing and formatting are top-notch, I noticed no glitches. Layout adheres to the series’ elegant, printer-friendly two-column b/w-standard with thematically-fitting full-color and b/w-art. The pdf comes fully bookmarked for you convenience.

Eric Morton’s carnosaurians are an intriguing, well-crafted offering – this is a balanced, cool take on the saurian race and blends his predilection for “realistic” takes on the animal aspects well with the fantastical, providing an overall well-crafted, intriguing supplement – at the low price-point, definitely worth a final rating of 5 stars.

You can get this nice, inexpensive racial supplement here on OBS!
Endzeitgeist out.