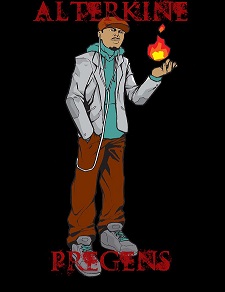 This pdf clocks in at 18 pages, 1 page front cover, 1 page SRD, leaving us with 16 pages of content – which makes sense as soon as you open this pdf.

Why? Because as soon as you do, you’ll be looking at character-sheets – pregenerated at 4th level, two pages of standard character sheet per build, because these are not pregens in the traditional sense – they are basic stats with some crucial equipment added. No names, no character. The alterkine-compatible sheets with slots for wealth and reputation have been filled rather nicely and cover the base classes trooper, warrior, tech, scav, mystic, investigator, drfiter and charmer.

Aaaand…that’s about it. Class abilities, feat, encumbrance etc. are all listed, as are backgrounds and the like. Where applicable, ranged weapons lack the ammunition available for the weapon on the respective build’s first page. The builds are pretty decent and neither useless, nor will they win any optimization-contest.

Äh…what else? There is not much to say about the pdf layout or formatting or editing-wise – if you’ve seen a d20-game-based character sheet, you know what to expect. It’s bookmarked (Kudos!) and pretty solidly done.

Öhm. Yeah, that’s about it. You know, I kind of almost went off on a rant how advice on how to play characters, personality, roleplaying advice and fully fleshed out stories pretty much have been the standard among the pregens I’ve reviewed so far…but that wouldn’t have been particularly fair now, would it? This file costs $1 and provides a whole array of pregens for Alterkine/ d20 modern/future. It has neither frills or inspiring moments, it requires the player to make a character from the stats – but for one measly buck, it takes the work of making the mechanics for a group of level 4 PCs off your back – and that’s a fair deal.

As long as you don’t expect actual characters to come out of this, but are aware of what this pdf, you may consider this worthwhile. So yeah – I’m going to rate this pdf on its own terms, for what it is, rather than for what one could expect from pregens. My final verdict will clock in at 3.5 stars, rounded down – this is pretty much the definition of a low-cost, solid, but unremarkable offering.

You can get these pre-filled sheets here on OBS!
Endzeitgeist out.