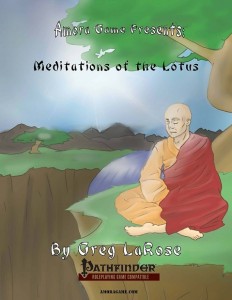 The first small pdf of Meditation feats by Amora Game clocks in at 6 pages, 1 page front cover, 1 page editorial 2/3 of a page SRD, leaving us with 3 1/3 pages of content, so let’s take a look!

Meditation feats were introduced in Faiths and Philosophies and the feats herein utilize these rules – which are reprinted for your convenience and grouped among the basic lotus position feats – Meditation Master, Body Control and Combat Meditation, to be precise. Beyond that, though, the pdf allows monks to take these feats as bonus feats and similarly Liber Influxus Communis‘ cool mnemonic class may take them instead of a bonus feat, while mystics may take them instead of a talent – nice to see the pdf be this considerate.

If the above feats do not ring a bell for you, well, then let me fill you in: Basically, you meditate for 1 hour to get a minor floating bonus you can later apply to a single roll over the course of the next 24 hours. Body Control grants a bonus versus poison, disease, starvation and fatigue/exhaustion effects. Both have in common that they are very weak, but flavorful feat-choices. Combat Meditation is more interesting allowing you full-round action meditation, granting the benefits of all meditation feats, but only for 1 round per level you have. This one is the interesting one that demands to be upgraded and this pdf does just that. So yes, while basically not perfect, we’ll see what Amora Game did with these.

First, the feats herein are grouped by Yoga practices, the first group being the Sun Salutation.

-Body Mending: Gain Fast Healing 1 while subject to Combat Meditation’s duration. Fitting for some groups, though it may result in problems in others: While slow, this still represents unlimited healing at levels 5+ – which I consider highly problematic in spite of the feat-tax.

-Chakra Disruption: After using Combat Meditation, you may deal 1 point of Str or Dex damage or with an unarmed strike or cause the target to be unable to spend grit, ki or panache for 1 round – and if using Ultimate Psionics or Liber Influxus Communis, the feat does have synergy here – nice.

-Center Focus: Gain 1 ki point through meditation, even when not having a ki pool, +1 if you also have Extra Ki, though you may not surpass the maximum of your pool, if available. This one is problematic, since it takes a restricted resource and makes it an unlimited resource at least if my reading is correct and Combat meditation allows for the use of this feat to grant temporary ki. I do like that e.g. Dragon Tiger Ox‘s ki-based shenanigans can be combined well with this one, but still – I advise caution regarding this feat.

-Circulatory Control: For 24 hours after meditating, you may utilize concentration to delay the onset of poison/bleed. Cool one!

-Contemplative Endurance: Meditate as a full-round action, losing 1 point of ki, but gaining 3 points of stamina that need to be spent within character level rounds.

-Contemplative Maneuver: Select one combat maneuver after meditation; thereafter, you may perform it 3 times immediately after a failed attack against you sans provoking an AoO. In Combat Meditation, you don’t get additional uses, but may switch maneuver. Absolutely awesome little feat!

-Controlled Emotions: Reroll a Will-save versus a fear-effect once after meditation. Pretty weak.

-External Power: Select a Ki Power or Technique you meet the prereqs for; you can use it at character level monk levels; You can power the power or technique via grit.

-Gritty Thoughts: Meditate to use ki to fuel grit/panache. Cool one, though the ki-regain mentioned in a previous feat can make this nasty.

-Heroic Thoughts: Use ki to gain a temporary hero point.

-Innate Yin: +Wis-mod AC, sclaes via meditation feats you have and stacks with other Wis-based insight bonuses to AC like that of the monk.

-Last Efforts: When dropping below 0 HP, automatically stabilize and perform one combat meditation – for the duration you are treated as though you have 1 hp and may act as normal – basically, you are immortal until the meditation ends, with damage etc. being postponed to the end of the meditation…as well as healing. The feat’s last sentence has a glitch in the sentence structure, but its intents remain clear. Nice high-level feat!

-Living Sword Technique: Choose Craft or Profession and use your RANKS in such a skill in place of BAB – cool one and proof versus magic-boost abuse.

Editing and formatting are still good: On a formal level, there is not much to complain, though there are some minor hiccups in the rules-language. Layout adheres to a nice, printer-friendly two-column full-color standard and the pdf has no bookmarks, but needs none at this length.

Greg LaRose has grown tremendously as a designer and this pdf shows that; while the rules-language is not always perfect, my gripes almost universally pertain purely aesthetic minor hiccups that do not negatively influence the rules – kudos! Also: The high-level immortality-feat is awesome.

I am a bit torn here – on the one hand, vanilla monks can use the feats herein and in such games, the feats herein should cause no problems. If you’re like me, though, and have books with ki-powered weapons, rays powered by it etc., then making ki an unlimited resource can break your game’s balance, depending on the power level you’re gunning for. Still, this is by far not a bad pdf you can get for a more than fair, low price – hence, my final verdict will clock in at 3.5 stars, rounded down for the purpose of this platform -a quintessential mixed bag, slightly on the positive side.

You can get these inexpensive feats here on OBS!