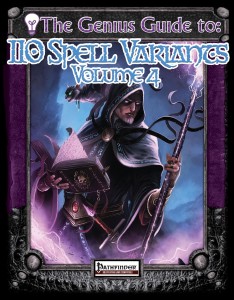 The fourth genius guide detailing spell variants is 14 pages long, 2/3 of a page front cover, 1 page editorial/SRD, leaving us with 12 1/3 pages of content, so let’s take a look!

The pdf kicks off with a list of spell variants by classes that also gives us the necessary pieces of information to run these variants and properly use them and from the get-go one has to notice two great innovations I wholeheartedly applaud: Number 1 would be that the respective spell variants are numbered so reviewers like yours truly don’t have to do all the counting. 😉 More relevant for you, though, would be the fact that there are quite a few spell variants that are exclusive to certain classes – whether to witches, summoners, alchemists or inquisitors  -only sorcerors and wizards and clerics and oracles share the same spell variants. Why is this a good thing? Because it serves to distinguish the different classes more from one another, making them vastly more distinct and resulting in a less exchangeable gaming experience – so kudos for that! I hope to see this trend continue in future releases!

That out of the way, the spell variants often as a consequence feature a more restrictive availability than their base spells that has to be fractured into balance concerns and which I’d wholeheartedly recommend you to adhere to. Better yet, the tighter focus on classes allows for the spell variants to work in unusual ways – take for example adapt: As a ranger’s variant of the jump-spell – it applies to acrobatics, swim and climb-checks, but only in favored terrains. I really, really love this interaction between magic and class abilities and it adds a whole level of coolness to this pdf-collection. But not only are some of the spells directly referring class abilities for cool snyergy-effects, we also get spells that are modified towards specific abilities: Take e.g. the Antijuju Field, which works like a basic antimagic field, but only for hexes and hag magic – accessible exclusively to the witch and inquisitor classes.

Beyond that, there also are spells in here that may be considered much more interesting in their imagery than their base spells – take Brass flask, which allows you to counter spells as per dispel magic and bottle them up for a limited time in a brass flask to unleash the countered spell on your foes. There are also some interesting modifications like Celestial Hunter, a variant of sanctify armor that works exclusively while in wildshape and even a spell that lets you highjack control over artificially-created demiplanes. On the funny side, there’s a gender-swapping spell in here and gaining evolution points in addition to the rage-spell’s benefits is something the arcane casters will surely appreciate.

That being said, not all of the spell variants hit the nail on the head and suffer from the format/their implications. Take the Youth-spell, which is a variant of raise dead and removes 1d6 years, allowing the recipient to cheat death- indefinitely, in theory. For a total of 7K gold once every few years, you can now stay young forever! WHAT?  Introducing this spell would mean that just about ANY good adventurer of a significant level could postpone death, never mind the mayors/nobles of empires and cities – introducing this spell to a campaign would result in a vast array of godkings walking the earth. NEVER gonna happen in my game. A second variant with which I have a bone to pick would be detect murder – a variant of detect magic that shows whether a target has been killed with malign intent. The thing is – what qualifies as “malign intent”? Is loosening a brick in an archway that subsequently kills Lord British malign intent or just an accident? Where does the term begin, where does it end? What if you bake a bread from rat poison and put it somewhere where anybody could eat it – and someone dies, though you intended to use it to kill those pesky pugwampis plaguing the kitchen? Does that qualify as malign intent?

Editing and formatting are very good, though I noticed a couple of instances of minor glitches, like “Scorching ray” not being italicized on page 9 or non-core-rulebook spells sometimes mentioning their origin books and sometimes not. Nothing gamebreaking or truly hindering, though. Layout adheres to SGG’s 3-column full color landscape standard and the artworks are neat indeed. The pdf comes without bookmarks, which is a major bummer comfort-wise and makes finding the respective variants a tad bit harder than usual. While navigating this pdf, I also found a recent trend in pdfs would have vastly added to this pdf’s comfort – if the spell variants were hyperlinked to their respective d20pfsrd-basics, this pdf would be infinitely more accessible and require less book swapping.

That being said, this is still complaining at a high level, for many of the spells herein actually do very interesting things and the class-specifics/mechanics-interactions make these variants more intriguing than many full-blown spells I’ve read over the years. While not all of the spellls rock, the majority of them do and while some base spells don’t rank among my favorites, I won’t hold that against the rather neatly crafted majority of variants herein. In the end, I would have swallowed the two problematic variants and still granted this my full-blown recommendation, were it not for the combination of slightly-above SGG-level glitches and the lack of bookmarks and hyperlinks. Thus, I’ll omit my seal of approval and settle for a final verdict of 4.5 stars, rounded up to 5 for the purpose of this platform.

Check out these spell variants here!