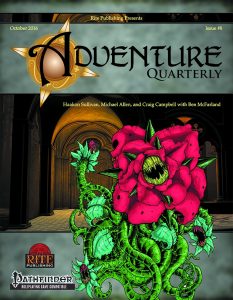 This book was moved up in my review-queue due to being prioritized by my patreons. Additionally, I received an early access iteration, which allowed me to complete actually testing these modules prior to release – one of the reasons you’re seeing this review so relatively close to AQ #8’s release, in spite of the issues that have haunted real life for me in the last couple of weeks.

We begin this installment, as always, with an editorial by Robert N. Emerson – and it is here, I’d like to echo his sentiment: The former commander of Rite Publishing, a great friend of mine and a visionary author, Steven D. Russell was taken from us this summer. It is his wife, Miranda Russell, who has taken the reins of Rite Publishing and done so with an aplomb and grace that is, frankly, extremely amazing. It is my firm conviction that Steve would be proud of the “Rite way” of gaming not being lost.

Anyways, you know the drill – this book contains modules and as such, the following contains SPOILERS. Potential players should jump to the conclusion.

All right, only GMs around? Great! We begin with Haakon Sullivan’s “Race for the Cage”, intended for characters of 4th level. The small village of Kingsden was terrorized in the past: A strange entity was killing people – then, a witch came and the murders stopped, her endeavors obviously successful. Thus, this unpleasantness sank into history’s obscurity. Now, as the PCs happen to travel through town, the murders seem to have resumed – the first victim being a poor dwarf, but why him? Well, there is a good reason for that and the PCs will soon be pointed towards the truth, an abandoned wizard’s lab, which may, according to a local poem, contain the dread beast. After this brief intro (which took about 30 minutes of asking questions and the like), the module proceeds to…well, take no prisoners: Two paths lead towards the goal within the complex: And one is collapsed by the death cultists, who are on a sacred mission to once again unleash the beast that stalks these realms.

From here on out, the module becomes a race: The PCs have 6 minutes to reach the end of the gauntlet of traps, puzzles and challenges – plus 1 minute of out of game discussion per room, at least that’s the suggestion. If you enforce this hard time-limit, then rest assured that the sequence of interesting obstacles will push the PCs hard: In one room, for example, a flesh golem remains – a foe beyond the capabilities of the PCs to defeat…but it is still connected to tubes and wires…perhaps the PCs can use those funny-looking levers to defeat it…If the PCs do lose the race, they’ll have a hard time – a vampiric spider would be the insane beast the cultists seek to free, but once again astute observation can help the PCs prevail against this overwhelming boss. Success in the race (surprisingly difficult, mind you!) renders the finale pretty simple, obviously…but frankly, if you’re a bastard-GM like moi, you may well choose to spring free this boss still…

A highlight since the inception of Adventure Quarterly, at least for me, would be the post-modern mega-dungeon-crawl Ruins Perilous: This complex was created by Questhaven, city ruled by adventurers, and progress within this dungeon can actually enhance your status and increase your standing within the city’s strata. As such, the complex has a very unique feeling, both one of a supremely dangerous obstacle course and one of a constructed dungeon that is a dungeon for a dungeon’s sake -and still retains the feasibility and internal consistency you’d associate with such an artificially created dungeoneering environment. #7 sported one of the best levels in the whole run, so let’s see whether Mike Welham’s 6th level of the complex, the Test Lab, can maintain this level of quality!

I was speaking of internal consistency – and indeed, there is more to the adventuring life than murder hobo-ing through scores of hapless dungeon dwellers; as such the Dungeon Dragon in charge of this complex has made this level a proving ground for adventurers that focuses on more than just “I hit it with my weapon of choice” – the theme here is the solution of problems with both brain and brawn. With passwords, pure strength, skill or willpower, the PCs can enter the first section of the level: And, indeed, there are 4 wings that lead to the final challenge: Each wing requires a different skill set to complete: One for physical exertions, one for stealthy tricks, one requiring willpower and one that rewards keen wits.

The respective challenges in each wing are intriguing and creative…and slightly more deadly than you’d expect, for a cadre of disgruntled ratfolk of the groundskeepers ultimately made the level even less pleasant. Now, if your players are REALLY good and if you are similarly an experienced GM, I’d suggest making each wing only available to the respective, fitting characters. While this eliminates the otherwise really pronounced replay value of the dungeon, it also lets you experience the totality of the level…and frankly, it’s so damn good it’s worth it. Beyond the potential to use the disgruntled ratfolk as combat encounters, the place, as a whole, is simply an inspiring experience to play through. Taking the leitmotif one step further, actually activating the guild forge requires the use of a complex, evocative machinery. Frankly, I could rattle off the challenges the PCs will face, but that would do the genius of this glorious level no justice.

The third module herein would be the Vault of Shaju, crafted by Craig Campbell and none other than Ben McFarland, is intended for 9th level characters and the chronicle of the love of an unlikely pair: The necromancer Viuslethiem and the rogue Shajuyumil – who found true love. To thwart death, Shayumil would place his soul within the confines of a sword of transcendent quality, thus allowing him to stay with his love even after she ad ascended to lichdom. The PCs, then,a re assumed to have been hired by lore master Pickwendy to guard his expedition – but upon arrival, they happen upon giants that have decimated the camp – Pickwendy only wants the artifact, the aforementioned rapier – and yes, the module actually has notes for GMs who do not want such a powerful tool in their game. Alas, as mentioned before, Pickwendy and his ilk have met their fate – it is thus sans competition of the like that the PCs will sooner or later happen upon the complex, where an ephemeral voice accompanies their exploration, pronouncing, surprisingly, not death, gloom and doom, but rather sensible challenges. Indeed, this whole complex, this whole gauntlet, proves to be a test of both mettle and character, which leads ultimately to the powerful rapier Shajuyumil, who only asks to be reunited with his love – this vow alone is required to claim the powerful item once the PCs have reached it…though reaching it is anything but simple: Both the unique combat challenges and the obstacles presented, including an intriguing moral dilemma, can test PCs in creative and intriguing manners.

Editing and formatting are top-notch, I noticed no significant hiccups. Layout adheres to Rite Publishing’s beautiful 2-column full-color standard for the series. The pdf sports several nice, original pieces of artwork. Deserving of a special shout out would be Tommi Salama’s absolutely stunning full-color cartography and the fact that this comes with player-friendly maps…including high-res versions.

Haakon Sullivan delivers the best module I have read from his pen herein, finally making the leap from very good/good to awesome. Mike Welham is one of the best 3pp-authors out there, so it should come as no surprise that his module frankly is phenomenal – he should write more of these! Finally, Craig Campbell and Ben McFarland’s third module falls in no way behind the quality of the first two: In short, this installment of AQ is all killer, no filler. There is not a single module herein that is content with just spamming combats; there is not a single dungeon herein that does not have its copious sparks of brilliance, its unique challenges. Add to that the superb cartography and we have a module here that frankly transcends the generally exceedingly high quality the series features anyway.

So yes, this installment is worth its more than fair asking price; I’d even go so far as to claim that the modules herein are good enough to warrant conversion if you’re playing a different system! Unsurprisingly, my final verdict will clock in at 5 stars + seal of approval for this glorious book.