Not So Advantageous Abilities (5e)

Not So Advantageous Abilities (5e) 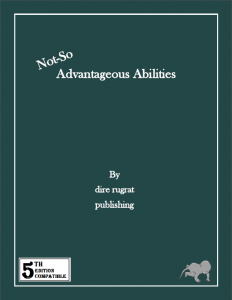 This installment of the Advantageous Abilities-series clocks in at 8 pages, 1 page front cover, 1 page editorial, 1 page advertisement, 1 page SRD, 1 page back cover, leaving us with 3 pages of content, so let’s take a look at these abilities!

All right, so in the beginning, we get the by now traditional explanation on how to use the abilities contained within this pdf, with detailed explanations of how to use, the save DCs if applicable, etc.

The pdf, unless I have miscounted, contains a total of 20 different abilities, all of which fall within the category of passive abilities, i.e. they do not require an active use of an action, bonus action or reaction – they’re always on, if you will.

From a structure point of view, the pdf mostly covers new ground, though I have e.g. seen peg-legs before in Dire Rugrat Publishing’s offerings. This time around, the advantageous abilities are actually drawbacks and thus range from CR +0 to CR -3, allowing an enterprising GM to use them to run a superior villain for a group of PCs. A notion, which, personally, I’m a big fan of, since it further emphasizes 5e’s rock-paper-scissors principles; plus, as far as I’m concerned, I’m always in favor of rewarding smart players that do their homework.

Now some of these drawbacks obviously have a humorous edge if you play them accordingly, but that does not mean that this is a joke-product; quite the contrary is the case, for the disadvantages herein can often be played either way; a balance disorder (at CR -1) can make you prone to falling bouts, sure, but this can be used in a serious context…or for massive amounts of slapstick. Beer Budget (at CR -2) means that the creature in question really has a sucky armor and weaponry – and apart from the name, it can be used as an easy tool in serious contexts.

Want a creature (or even PC!) with just one eye, perhaps for a Solidus Snake build? The feature’s here. Having a selective blind spot, as previously demonstrated in the “Delectable Dragonfly” can make for some really cool and fun narrative tricks. Having particularly brittle bones increases the damage incurred by bludgeoning attacks and works pretty smoothly in more than one context. Traumatic fear of a given color.

There also would be a representation of utterly being cursed by luck – super-disadvantage, if you will: Whenever you suffer disadvantage , you roll thrice and take the worst result! OUCH! Being grossly flatulent or having the chance of dropping items on fumbles can be assigned to the funnier drawbacks, while a strongly pronounced irrational fear can be found as well; here, it would pertain to blood, though it can easily be tweaked to apply to a variety of different triggers without any issues. Being particularly prone to sleep is cool, bit I particularly like the representation for being sucky caster (magic school dropout- no higher spell slot increases and auto-concentration failures!); you see, it kinda makes sense to me that charlatans and failures like this would exist in a world as steeped in magic as the defaults we assume for our game. So yeah, this alone can not only make PCs feel special, it can actually add a lot f flair to the game. This one may be worth downloading this on its own! (As an aside – I concur with the designer’s note that comments on why the save DC here is static – nice look behind the curtain!)

From horrible indecisiveness to being particularly squirrely, the options herein cover quite some ground and yes, they include a propensity fo villainous monologues, which render the villain really distracted while he is elaborating his grand plan. Funny, yes…but also very usable in regular games for sufficiently narcissistic foes.

If all of these CR modifications have you a bit skeptical, rest assured that the massive tables of proficiency bonus by CR and XP by CR help you to immediately adjust the target creature to its new version. Kudos for this very GM-friendly decision!

Editing and formatting are very good: Apart from one instance, where a skill-reference was not properly capitalized, I noticed no grievous glitches. Layout adheres to Dire Rugrat Publishing’s two-column b/w-standard, is printer-friendly and comes with a rather funny piece of original b/w-artwork depicting a comically villainous face. The pdf has no bookmarks, but needs none at this length.

Ken & Kelly Pawlik deliver big time in this humble, little pdf. The material we receive within these pages can truly enrich the game and adds some seriously nice tools to the arsenal of 5e-Gms out there. While a few of the disadvantages herein have been featured in Dire Rugrat’s oeuvre before, he majority of them are actually new and extremely usable, not just in slightly humorous contexts. In fact, there are some seriously nice gems herein…oh, and the pdf is available for PWYW!! So you can basically check it out and then leave an appropriate tip…and yes, you should do both. This little pdf is well-crafted, enhances the game and is definitely worth your support. Adding its PWYW-nature to the fray, this gets a full-blown recommendation at 5 stars + seal of approval .

You can get this cool pdf for PWYW here on OBS!