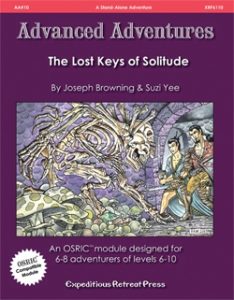 This module clocks in at 29 pages, 1 page front/back cover, 1 page editorial, 1 page SRD, leaving us with 26 pages of content, so let’s take a look!

This adventure is intended for characters level 6 – 10, and in this case, the level-range is well-supported by the actual playing experience; you see, this module very much champions the old-school aesthetics of risk-reward-ratio; it is possible to experience this module as relatively easy, or as truly brutal, with player-greed very much dictating the difficulty and potential fallout stemming from exploring the complex depicted within. A well-rounded group is very much recommended to successfully tackle this one.

Now, it should be noted that the text on the back cover can make for a kind of introductory read-aloud text for the adventure, with the means of the PCs getting the eponymous keys otherwise not specified. As always in the series, we do not get read-aloud text or the like, the rules-system in question would be OSRIC, and internal formatting of rules-relevant information does not always adhere to the standards. The maps are b/w and functional, though the brief overland wilderness trek map provided lacks both scale and grid, which makes calculating traveling distances a tad bit annoying. While I’m on the subject of maps: The module sports the complex dubbed “Solitude” and the tunnels beneath it and has a clever means to prompt the PCs to explore, but more on that later in the SPOILER-section. In a really unfortunate decision, the module uses straight numbers for the rooms above and areas below the surface – thus, the short table that is supposed to help the GM track the whereabouts of the missing keys is less useful than it should be. The key is in room 14? Okay, which of the two? It’s a small thing that could have been rectified with simply adding letters to prevent mix ups and constitutes an unfortunate comfort-detriment. It’s not something that wrecks the adventure, mind you, but it’s so obvious, I wondered why it hadn’t been implemented. Instead, the subterranean complex uses letters to designate rooms that belong to humanoid territories, which makes the whole numbering/lettering convention feel a bit unfocused. There are no player-friendly maps included.

The adventure, though longer than usual for the series, spans 17 pages, with the rest devoted to supplemental material, in particular to a smattering of new creatures. 2 spells are provided: Champion of the Tome enchants a book to have a fighter-version of the caster appear to defend it, while Phineus’ Writhing Tentacles is a cool and dangerous spell to call forth the class mass of tentacles, which also gets a blinding effect, but makes up for that by blindly flailing at any target in range. The module also includes 5 magic items, which are per se solid, though the army of tireless tin soldiers is missing its XP-value. EDIT: I believe in owning up to my mistakes, so tehre goes: I misread this item to not be an artifact, when it clearly is. Mea culpa! Now, as far as the monsters are concerned, I’ll cover those in the GM-section below.

The module is in so far interesting in that it captures in an expert fashion the feeling of a very classic D&D-esque fantasy; from the random encounters in the wilderness to the constellations of adversaries faced, the adventure successfully evokes the fantastic vibe of old-school gaming with a slightly subdued, gonzo angle; you know, the feeling you had when you first encountered druids acting as rust monster shepherds? There is a sense of a very classic fantasy vibe that does not cross over into the weird or totally gonzo. If you enjoyed the old AD&D-classics like Desert of Desolation, then you’ll know what I mean.

All right, this is as far as I can go without diving into SPOILERS. From here on out, only GMs should continue reading.

All right, only GMs around? Great! So, the PCs, after having encountered a weird hermit, have received some plaques depicting animals, which seem to interact when brought together, and which seem to provide a map through a mountain pass towards an unknown destination called “Solitude.” The wilderness trek, which does come with random encounters, is wholly linear in its fashion, as the terrain of the pass does not offer for opportunities to deviate from it. While the adversaries faced contain vermin and similar critters, there also is a valley where quite a few quickgrasses sprout´, and a fool’s dragon pair (think weaker, dumber dragon-like lizards) also waits in the way.

But what lies at the end of the journey? Well, Solitude is actually a monastery – or at least it looks like it. A slain T-rex, with plenty of meat cut from its flanks is a great example for the “(A)D&D-ishness” of the module: You see, while Solitude had lain abandoned for a long time, its gates have been since breached by spriggan siblings that lead a small army of gnolls. In the aftermath of inadvertently setting free the T-rex, one of the spriggans died, triggering a schism between the remaining siblings, who each have since taken their (rather well-equipped!) surviving gnolls, those that the dinosaur didn’t eat, that is, and started plotting the downfall of their brethren. An enterprising GM and smart players can observe these latent hostilities and exploit them, for the PCs will have to explore both monastery and the caverns below to truly find everything here – and encounter the strange creatures below.

The bestiary includes a predator that eats jellies and oozes and can spit them at targets; spiders that have developed a symbiotic relationship with deadly fungi; pixies degenerated into stirge-like beings – the pdf, in its best moments, feels like a celebration of the old-school vibe we all know and love. Not all critters are this creative, though: A deadly ambulatory fungus, a race of small degenerate humanoids and a magic-eating slime aren’t exactly super exciting. The bone-sovereign depicted on the cover, however, is surprisingly cool, and there is a fungal ring that can act as a safe haven for good folks…but will try to digest evil-doers and all nearby! Really neat! The pdf also includes stats for an elemental prince of water and a unique and horrid undead, ritually created via starvation (not as easy as it sounds, as the grueling ritual is described) – and the latter two should provide a clue to what Solitude actually is.

Some readers may have already come to the right conclusion, but let me spell it out nonetheless. Solitude, at one point, was a kind of artifact-level magical prison, and the tablets, the keys, are literally that – they open the cells of the inhabitants of Solitude, the inmates if you will. The erstwhile wardens have fallen prey to corruption and died, but the prisoners remain and include a dragon who has managed to tie her lifeforce to a volcano – slaying her may cause an eruption and untold suffering! Some other cells just hold treasure, though – so, once the PCs realize what this complex is, will they gamble? The T-rex freed by the spriggans provides ample warning for greedy PCs, so they can’t claim to not have been warned…

However, if the PCs are to collect all keys, they will also have to interact with the two sentient rodent species below the complex: On one hand, the Mus Maximus, smart mouse-people, make for unique and good folks that can be a boon; on the other hand, the groundlings, sentient groundhogs that are invisible to the undead make for a far less pleasant company…I was surprised to note that I did enjoy these two micro-societies and their depiction. All in all, this module has a lot of what I want in an adventure, and it executes its premise and flavor well; however, at the same time, I couldn’t help but feel like the premise of the module could have carried much more. Ultimately, the keys only grant access to rooms and that’s it. There is no sequence to the exploration, there are no ways for clever PCs to e.g. lock down parts of the complex with the keys and potentially make hostile forces take each other out after being caged. The evocative visuals and magical natures of the keys would have lent themselves superbly to making this a module where smart PCs could use the terrain to triumph against overwhelming odds, to quarantine evils inadvertently unleashed with foes, slowly whittling down enemy strengths. In short, the premise of the adventure is far stronger than the somewhat disappointingly mundane execution of the artifact-prison angle. Don’t get me wrong – I like this module. But I began reading this as super-excited and couldn’t help but feel somewhat blasé about the actual implementation of the concept. With a few less pages devoted to monsters, and a more clever dungeon, this could have been one classic for the ages.

Similarly, a timeline for the factions and the like, some clearly stated goals and agendas and subquests would have taken up not much real estate, but would have added to the sense of the complex being alive.

Editing and formatting are good on a formal and rules-language level, bordering on very good, with formatting, as noted before, being somewhat inconsistent. Layout adheres to a 2-column b/w-standard and the pdf comes with nice, old-school b/w-artworks. Not all monsters get art, but quite a few do. Cartography is serviceable, though the numbering/lettering conventions are somewhat unfortunately chosen. The pdf comes fully bookmarked for your convenience.

The team of Joseph Browning and Suzi Yee delivers a module that truly breathes the spirit of old-school (A)D&D; it *feels* right, and that tone is harder to hit than one would imagine. The adversaries faced are clever and brought me back to the time when I devoured the descriptions of ecologies of odd beings and monsters back in the day. I’m not a nostalgic man, but this hits the tone admirably well. That being said, at the same time, I couldn’t help but feel like this module could have made the step towards masterpiece simply by making full use of its amazing premise, which, at least to me, ultimately it did not end up realizing to its full potential. All in all, I consider this to be an adventure worth checking out if you’re looking for a neat old-school module. This is not the most convenient adventure out there, and its central concept for the complex could have been realized in an infinitely more rewarding manner, but as a whole, I do believe that this is worth a final verdict of 3.5 stars. For me as a person, I will round down. However, as a reviewer, I have an in dubio pro reo policy and thus will round up for the purpose of this platform.