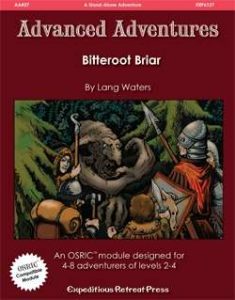 This module, as always for the series, was penned with the OSRIC-rules in mind; as always, we have some deviations from OSRIC’s formatting standards, though – there are no italics in the formatting for things traditionally formatted thus, instead using bolding indiscriminately for spells, creatures and items. This module is not always consistent when doing so, missing quite a few references – more than usual for the series. As always, the adventure features no read-aloud text, and otherwise adheres very much to the classic standards and presentation, including fonts used, etc.

The adventure is designed for 4-8 characters of levels 2nd to 4th, and the module suggests having a nature-themed character (you know, a druid or ranger) on board. I’d add one thing: If you run this RAW, you should not have evil PCs in the group, or modify the “good” end. The module’s locale has a unique feature that might warrant some GM-consideration, but otherwise is easily inserted into any forested area where once people warred, and now a humble village is nearby.  Integration into ongoing campaigns is pretty simple. The module actually starts off in the tiny hamlet of Ipwich, and a proper rumor-table is included. As always for the series, no read-aloud text is provided. As far as difficulty is concerned, this is a tough, but fair adventure: Careless PCs may face annihilation, but the module emphasizes PLAYER-skill in just the right way.

It should be noted that I particularly consider this to be an adventure potentially worth converting to other rules-systems – why? Well…

…in order to discuss this, I’ll need to go into SPOILERS. Potential players should jump ahead to the conclusion.

All right, only GMs around? So, first of all, the kids of Ipwich are a bit creepy, and have a fully-fleshed out song they sing while playing; this song actually contains hints for surviving the trials of the eponymous Bitteroot Briar, so attentive PCs will have an edge. Love that bit of lore! Speaking of which: Ghostly whispers in the wind? Actually relevant, not just creepy window-dressing! The hamlet’s master is currently being poisoned by a dangerous individual (who might ingratiate themselves to the PCs, hereafter referred to as “the poisoner” to avoid spoiling the identity), and the only cure is inside the Bitteroot Briar.

There are a few issues, though: For once, the woods are not exactly safe; secondly, the eponymous briar is the result of an ancient war gone wrong, creating a circle of thorns around a grove – and said circle not only distorts time spent inside, it also shrinks those entering to 1 inch in size, and prevents exiting, save by shapeshifting magic. Some creatures are exempt from this, and the Ironwood’s denizens have learned…for example a nasty troll. At this level. Told you that this doesn’t play around! The module lists movement per round for the common values (60, 90 and 120 ft.), and normal-sized items miniaturize automatically when touched by a shrunk target; ceasing to hold onto an item has it slowly regain its size. This is an AMAZING angle. I ADORE it. I would have preferred that the module was more detailed in its use of this fantastic premise, though. We waste half a page on a needlessly complex background story regarding the ancient conflict, when the whole shrinking angle would have warranted some further notes. You see, unintelligent creatures like mudmen are exempt, and act as more of a cataclysmic hazard than an actually aggressive critter, but the pdf does not state how e.g. an attack from a shrunk target to a regular-sized one fares. This does not necessarily need to come up in play, but it’d have been nice to get at least some guidance. Same goes for the “dead trees” – you see, the trees of the grove often sport items embedded in them, due to being victims of the past, and the objects contain the souls of these unfortunates. Removing them from the grove frees the souls, which imho should have suggested rewards regarding experience, items, etc.

That being said, I’m super-tired of nitpicking what I otherwise consider a phenomenal adventure: The ancient magics unleashed have changed the combatants of yonder, and e.g. a company of soldiers is now living as essentially fascist bees; one of the villains has been, suitably, turned into a snake, and traumatized adventurers that have survived the predations of the shapechanging poisoner may well attack the PCs, mistaking them for allies of the dark. The pools include a man-turned-crayfish with a rivalry with a man-turned-frog; we have a sociopath turned gruesome spider-man hybrid, a giant ant mini-dungeon…and there is the island in the middle, surrounded by pools and streams.

Falling into the stream bisecting the thorn-wall-encased briar might put the drowning PCs in service of a pretty nice water weird, to note one example of how the module is tough, but fair. The BBEG, the guy turned into a nasty giant snake, wants to execute the Rite of the Reaper, and the poisoner is actually in league with him…with this dark rite, escape may be possible, but at a terrible price, including the willow at the heart of the briar filling with acid in a surprisingly cinematic final encounter! There is one complaint I have here on a meta-level – the giant ant mini-dungeon, while not bad, isn’t exactly required for the module; having the place where the finale takes place properly mapped would have imho been the wiser use of the map-budget.

However, the best thing about this module? The most important thing here is ROLEPLAYING. Those ghostly whispers and how the PCs behaved in the adventure while interacting with the other denizens? That influences the end! You see, the voice in the wind is actually that of a magical, sapient blade, and finding the pummel, rebutting the Reaper’s rite, acting in an upstanding manner? All of that and more influence whether the blade will awaken to its true power. This emphasis on player-skill, on rewarding ROLEPLAYING over rolling the dice, is one of the cornerstones of good adventure design in my book. Huge kudos.

In case you were wondering, by the way: If you want an adventure to give Everybody Games’ Microsized Adventures a spin in PFRPG, this is perfect – just add stats, et voilà! Same goes for other systems. This is worth converting.

Editing is good on a formal and rules-language level; the mechanical aspect, as noted, would have warranted more detail. Regarding formatting, the module has a few more deviations from the series’ standard than usual. Layout adheres to the series’ two-column b/w-standard, with few artworks. The pdf comes fully bookmarked for your convenience. Cartography is b/w and functional – a table of travel times in the briar would have been nice to have, though.

This is a prime example of how awesome a module you can write in a few pages. From the small touches to the fair challenges to the focus on player skill over just rolling high, this is a prime example of a great old-school module. If anything, the only true flaws of this module lie in it not fully capitalizing on its unique angle inside the briar; some GM-convenience like travel times, additional notes on interaction with the non-affected and the like, and this’d have been pretty much a true apex of the series. As provided, it is an adventure I love, but one that has a few minor blemishes that may render it harder to pull off for less experienced GMs. Most troublesome would be in that regard that the final encounter area isn’t mapped.

As such, my final verdict will be 4.5 stars. Usually, I’d round down, but this is the author’s first offering, and I traditionally am a bit more lenient on freshman offerings, which is why this review will round up. If anything, this author should get to write A LOT more adventures! As a person, this really excited me and is one of my highlights in the series so far, and hence, this also gets my seal of approval.

If you want to use this in PFRPG, get Microsized Adventures here!