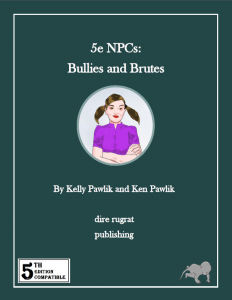 This collection of NPCs clocks in at 44 pages, 1 page front cover, 1 page editorial, 1 page ToC (including challenge ratings), 1 page SRD, 1 page advertisement, 1 page back cover, leaving us with 38 pages of content, so let’s take a look!

The pdf covers a total of 18 characters, ready to be inserted into your game, which range from CR 1/2 to CR 18. Fans of the Tangible Taverns/Tavern Tales product-lines will notice some overlap regarding the NPCs, as for example Pie-Eating Pete or Tuffy Brokehaft make a reappearance herein – which can be considered to be a slight detriment for some – personally, I would have preferred an all-new cast, but considering that the vast majority of NPCs is new, I can live with that.

Speaking of which – in case you are not familiar with Dire Rugrat’s 5e-character design philosophy: Instead of making just numbers and replicating pre-existing abilities, one of the charming peculiarities in their books would be that characters do actually receive special, unique abilities. Beyond these, the characters each come not only with a statblock, but also with their own artwork – these either are hand-drawn or stock. Most, but not all characters herein also feature a word of advice in a small box on how to best use them.

Now, what type of characters can we find herein? Well, for one, e.g. Pie-eating Pete or Jaiblik Nibork would represent two characters best describes as, bingo, bullies – Pete’s signature ability, for example, lets him consume insane amounts of food, while Mr. Nibork is known for his incessant cursing and rambling, which can be pretty distracting for assailants.

These guys and a particularly cantankerous lady would be more on the semi-social side of things, but they are not the only characters herein – if you’re looking for an instant-villain, you’ll find the like herein. Take Lockjaw, the half-orc cannibal who can initiate grapples with his bite and who receives temporary hit points for biting foes. More ambiguous in use would be Butcher Bill, the dwarven headhunter, whose prickly spiked armor and expertise at shoving foes deserves mention.

Need a slaver? Hesssk Ta’Vaoren and his two worgs deliver just that -and there is more to the trio than meets the eye, for Hesssk not only is a master of the whip, he maintains also quasi-telepathic contact with them, making surprising them pretty hard. There would be a half-orc, wondering of what may have been and his fellow she-devil with a sword. There also is an enchantress-information broker with a mega-powerful way of maintaining control over dominated foes. There is also a corrupt guard captain (ironically named “shill”) and a half-elven, humans hating eco-terrorist ready to shed blood.

There would be a halfling enforcer with a fear-inducing reaction stare, who may not only break legs – her cold fury is something to witness. That being said, the ability diverges a bit from how 5e usually handles the like, providing a 3/day hard cap, instead of tying it to long rests, analogue to the barbarian’s rage feature. The powerful drow evoker Vreix Azztelle may pinpoint AoE spells to instead affect single targets and is pretty cool – however, if you’re very picky about this kind of thing, the character is missing the drow magic feature the race usually has. Aforementioned half-orc cad also does not have the usual relentless endurance feature. Now, it is pretty evident that such features were exchanged for others that fit the characters better, but depending on your stance on NPCs and racial features, it still is worth mentioning. In dubio pro reo – I will not hold that against the pdf.

However, where things become ever so slightly annoying from a reviewer’s perspective would be with the per se pretty cool Kel, the Blessed – a tiefling underboss with several nice, luck-themed abilities, whose hellish rebuke is noted as innate spellcasting, which does not include the note at what spell-level the spell is cast – a mostly cosmetic hiccup, but a blemish in one of the coolest characters herein. Seriously a nice character, though -and yes, I am nitpicking hard here.

Speaking of cool characters: Urden Shalespear, the dwarven herald of entropy, pretty much looks like the NPC-version of a class/archetype I have recently written and gets some cool tricks: Beyond an aura that brings desiccation and destruction, he is reborn in a bleak phoenix-like burst when slain—but pays a hafty price for this power. Oh, and he can tear open a devastating gate into nothingness, duplicating a new 9th-level spell featured herein. Slight complaint: The spell does not note for which classes it is appropriate. A suggestion would have been nice to see.

The final character herein, Lady Davia Belcouer, would be a powerful champion of the hells: With a sword of wounding, a powerful magical armor and the ability to behead foes with discernible heads, she also has no less than 3 legendary actions to negate crits or use Charisma-saves instead of others, making her a viable campaign-endgame adversary.

Editing and formatting are very good – I noticed no significant hiccups in the rules-language and the pdf is similarly well put together in the formal department. Layout adheres to a pretty printer-friendly two-column b/w-standard and the pdf sports a solid piece of full-color artwork for each NPC – some are stock, but most are actual pieces drawn by the authors. The older pieces here do show that they have refined their crafted compared to the newer ones. Still, nice to see. The pdf comes fully bookmarked for your convenience.

Kelly and Ken Pawlik’s collection of 5e adversaries is a pdf worth getting, let’s get that right out of the way. The price-point is pretty fair and the characters feel like actual characters. The lengths to which I needed to go to nitpick some aspects here should tell you something about this pdf, namely that it is a neat, well-made collection. The only truly relevant gripe I can field against this economically-priced, inexpensive collection would be the inclusion of previously-featured characters. Even if you take these away, the bang to buck ratio is still pretty neat, though – which is why my final verdict will clock in at 5 stars.

You can get these NPCs here on OBS!
Endzeitgeist out.