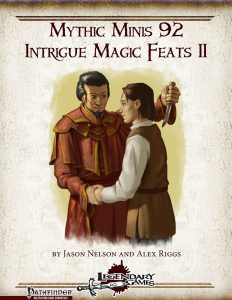 -Fey Spell Lore: You gain the mythic versions of all spells granted by the feat and may prepare them as though you had Piercing Spell. Nice!

-Fey Spell Versatility: Gain all mythic versions of the spells granted by the base feat. You can also expend a number of mythic power equal to the level of a spell from this list you prepared to change it into another spell (and cast said spell’s mythic version!), but at the cost of no longer being capable of preparing the spell for which you exchanged it. A Willing fey ally provided, you may switch spells when preparing spells without having to expend mythic power.

-Gaze Reflection: When averting eyes, subtract twice mythic power from the percentile roll to determine whether you’re affected or not You may also expend one mesmerist trick to gain mythic tier rounds immunity to gazes. For two expended mesmerist tricks, you gain immunity AND reflect the gaze back at the creature, range 30 ft. Awesome!

-Read Spell Traces: Double the bonuses granted by the base feat; expend mythic power to automatically identify a spell from its aura and gain a rough estimate when it was cast. Nice for magical investigations!

-Sabotage Magic Items: When exceeding an item’s DC by 5 or more, you can render it cursed instead of magic it cause a mishap; UMD can be used o negate the curse. Via mythic power, you may roll thrice on the common curse table, choosing which you’ll take. Damn cool!

-Superior Scryer: Perception bonus by the base feat is increased and the save DC is similarly increased; however, it also lets you use a slew of spells through the sensor, which is pretty cool! As a minor and purely aesthetic hiccup – an “OA” that should be superscript isn’t.

Jason Nelson and Alex Riggs’ second array of intrigue magic feats is absolutely amazing – creative, evocative, with some seriously cool options, this once again transcends the use for mythic gameplay, offering scavenging potential galore beyond that. Well-crafted, creative and diverse, this is well worth 5 stars + seal of approval.

You can get these amazing feats here on OBS!
Endzeitgeist out.