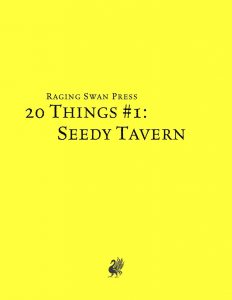 We begin this dressing-file with a selection of 20 different seedy tavern patrons you can find in a seedy tavern. The respective individuals are presented with their name, followed by an alignment abbreviation, gender and race…though some of the entries, oddly, feature class names and levels as well, while others don’t even though worn armor mentioned etc. would point towards an adventuring career. Drinking, boisterous dwarves, ancient gnome-beggars nicknamed “Filth” or an annoying, womanizing half-elf can be found here, while clerics review papers by candlelight.

Slightly more intriguing than the patrons would be the staff here: From friendly half-orc lasses with fractal tattoos to magic-supported gnome-barkeeps, they offer some more unique sketches. Beyond that, a table of 20 drinks and brief price-list for ales and wines 8only 4 entries) can be found on a page that also contains no less than 10 odd things that may be found behind the bar: Whole arrays of battered and broken shields, a dusty, cob-webbed bottle on a pedestal, a yellowed giant’s skull – here, the level of imagination I expect from Raging Swan Press is back in full force.

The pdf then goes on to note 8 specialties of the house, 12 meals to order and a total of 20 things that may have been left behind in a tavern’s given bedchamber- from deeply carved initials, paranoid scribbling, small metal flakes, rats with broken backs – there are some seriously diverse things that are hook-worthy. The 20 things to see in a tavern, from drunken half-orcs to scarred warriors and similar drunks, the focus here, alas, could be a bit more diverse – there only is one entry featuring a woman and breaking out in a drinking song…I don’t know if that warrants an entry of its own.

The pdf’s last page contains 6 different tavern brawl triggers alongside 20 things to see in a tavern brawl. The things that can happen here are intriguing and feature, for example, alcohol catching fire – it should be noted that this can cause 1 point of fire damage…which is relevant if you’re very peculiar about that kind of thing or want it purged from a system-neutral file. Another instance of such a remnant would be a slick space, which still sports a DC and a note of Acrobatics being required.

Editing and formatting are top-notch apart from the remnants that some entries taken from PFRPG-supplements sport. Layout adheres to Raging Swan Press’ elegant two-column b/w-standard and the pdf comes fully bookmarked for your convenience. Additionally, the pdf comes in two versions, one optimized for the printer and one for screen-use – kudos for going the extra mile there!

Creighton Broadhurst, Jeff Gomez and Liz Smith know their dressing. The pdf isn’t a bad offering by any means of the word, but at the same time, the Pathfinder-remnants that are still in here. Similarly, fans of Raging Swan Press will notice overlap with other tavern-centric supplements the company has produced so far, which may decrease the usefulness of this pdf for some readers. Similarly, not all selections sport the usual level of diversity and imaginative potential. As a whole, this offering left me slightly disappointed at a relatively high level, delivering a solid offering worthy of 3.5 stars, though I will have to round down for the purpose of this platform.