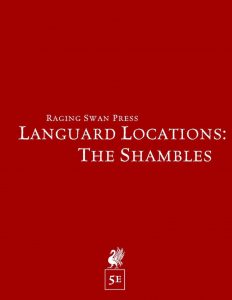 A total of 8 different, new locations are depicted in lavish detail within – as before, each of these places notes the respective people in the locale, depicted in brief, fluff-centric write-ups (usually 2 per locale), and additionally, each of these receives 2 or more adventure hooks to jumpstart adventuring. If there is gold to be spent at one location, it’ll state as much, noting e.g. the buy-in for arm wrestling and prices for drink, and one location even has some minor magic to be purchased. The references towards NPCs and the aforementioned magic items for sale have been properly adjusted to represent 5e’s dynamics.

It is puzzling to see how many people worked on this: the Shambles are penned by Creighton Broadhurst, Jeff Gomez, Steve Hood, Amber Underwood and Mike Welham – and it is testament to the prowess and skill of al of these authors that this supplement feels, this multitude none withstanding, like a concise and unified whole. Despite of the nature of the Shambles and the intentionally evoked, cobbled together, ramshackle sense the district creates, the entirety still gels together as an organic neighborhood – not only within its own framework, but also within the context of Languard as a whole. In short, this is one amazing little supplement that works just as well in 5e, and well worth a final verdict of 5 stars + seal of approval.

Missed Languard? You can find it here!