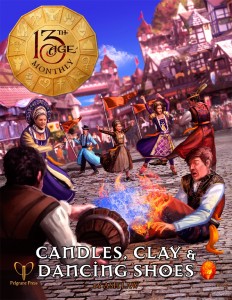 This installment of 13th Age Monthly clocks in at 8 pages, 1 page front cover, 1 page editorial/SRD, leaving us with 6 pages of content, so let’s take a look!

So, what this pdf provides is interesting – we get items that are obviously the result of the craftsmanship of minor sorcerors, here called alchemists and talismancers – basically, everyday items. However, beyond the basic concept provided, each item sports 13 rumors related to it, some of which may be true, some of which may be false…all depending on the GM. This customization option is something I truly cherish here…so what do the items do?

The first item would be Blacklight Candles – mundane candles of black wax…but only the wielder can perceive the light they shed. Sounds boring? Well, what if it’s true that only drow make these things? Or what if the fire started from such candles also is invisible? The latter is a genius hook I’m going to craft a whole adventure around. Clay of Life helps stabilizing the dying and can even be used to help re-attach severed limbs…and it may be fermented dragon droppings…or it may a plot of none other than the Lich King! Obviously, it would be pretty awesome if the extremely expensive clay sold in Horizon works – it returns the dead to life…but it could also transform them into mindless golems…

Dancing Shoes are a great idea: they allow you to dance like a pro…ONCE. As soon as you stop, they’ll burst into flames. Need a variant on the Cinderella-trope? Here’s an interesting one for you! (Oh, and yes, if you’re VERY unlucky, they may burn you – but hey, the show must go on…right?) What about arrows that are particularly lethal versus ethereal foes (and less lethal versus physical targets), allwoing the PCs to better fight the threat of dybbuks and similar adversaries? Featherlight Skirts are also awesome in just about any decadent environment – these skirts puff up like a parachute and feather fall the wearer. The sample stories suggest e.g. a cadre of bored noble women using these skirts for what amounts to illegal base-jumping – and the idea alone is glorious: Think about the narrative potential here for an uncommon murder mystery…or a conspiracy waiting in the wings.

Editing and formatting are top-notch, i noticed no significant glitches. Layout adheres to 13th Age’s neat two-column full-color standard and the pdf comes fully bookmarked with nested bookmarks for your convenience. Artworks are full-color and nice.

ASH LAW delivers some cool low-magic/alchemical items here. Yet, on their own, the fall somewhat flat. It is due to the absolutely inspired amount of narrative potential provided for each of them that they truly come into their own – what, on paper, sounds like a selection of solid, if a bit unremarkable items, becomes pretty awesome pretty fast by virtue of the inspiring 13 hooks provided for each of them, transforming the items into something more than the sum of their mechanical benefits.

Granted, I could nitpick some of these potential options: “Does the invisible fire created by blacklight candles visible burn objects or does it create an illusion of things being in order?” and similar reasoning – but that would be a disservice to the inspired ideas herein…and it would take a bit away from the GM’s options to customize the living hell out of these items to suit his or her need. I consider this to be an inspired installment in the series, one that oozes flair and panache, not only for 13th Age. The one reason (beyond aforementioned nitpickery) this does not reach the highest echelons of my rating system is that the items are story-items, one and all – they don’t really do something mechanically interesting. My final verdict will clock in at 4.5 stars, rounded up to 5 for the purpose of this platform.

You can get these evocative items here on OBS!