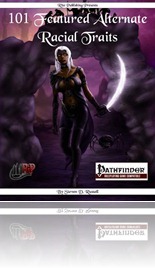 First among the new races would be the Aasimar and his traits: They now can e.g. gain access to a variety of heavenly spells that are added to their spell-lists, regardless of whether they cast via divine or arcane means. Some Aasimars can now also turn incorporeal for a limited time and gain temporal access to a feat they meet the prerequisites for. Second race to be covered would be the catfolk, which can now choose alternate racial attribute modifiers, gain a bite attack and roar to make enemies shaken. Dhampirs can now potentially drain blood to heal themselves, charm others, turn to gas and even drain life once per day as the full-fledged bloodsuckers. Also rather neat, classic vampiric weaknesses like garlic, inability to enter an abode unbidden etc. can now be exchanged for negative energy affinity.

The Drow-traits are especially neat, ranging from whip-proficiency, can hide from even blindsense, inflict wracking pain with a mere touch and endure the most crippling pain as pleasure, while Fetchlings may also serve the bizarre nihiloi and create umbral tendrils and even 1/day, imbue their attacks with strength-draining cold. Goblins, meanwhile, can become Coward’s champions, granting them bonuses against brave and valorous opponents, coup-de-grace downed foes faster and even eat the brains of vanquished foes to become temporarily smarter. Hobgoblins get some nice options, too, including the meritocracy-honed ability to roughly judge other creature’s capabilities and the ability to 1/day ready a full-round action -rather cool!

Ifrit (I’m still pissed Paizo calls these guys Ifrit – in German, that’s indistinguishable from efreeet and mythologically – don’t get me started….) can gain access to longstrider 1/day, a natural armour and the ability to 1/day inflict the damage dealt to him/her or one of his allies in the last round via a melee attack as a kind of retributive strike. Kobolds can once per day maximize non-lethal damage they deal or reroll the damage they deal with weapons or touch spells, taking the better result or gain a draconic breath weapon. Some kobolds seem to also actually be of goblinoid descent. They also get one of the coolest abilities herein: The option to jury-rig broken items, including a slight regain of charges, if applicable. Oreads (rant – see Ifrit) can gain a trait to reroll CMBs when bull rushing or overrunning foes, or once per day attempt to parry an attack on an ally with an AoO. Like the catfolk, ratfolk also get a second array of racial attribute modifiers and a cool trait that gives them a superior barter edge to get what they want at the cost of a service provided – a great way for the DM to introduce quests. You can now also play medium Dire Ratfolk and make use of the rat’s nomadic tactics, which include 3 kinds of impromptu traps/hindrances they can spring on their opponents.

Sylphs also come with a new array of attribute-modifiers and can gain access to misdirection and windy escape, for example. Tieflings get alternate attributes, can hail from a culture that regards them highly (e.g. Cheliax) and get more starting money and those that fully rejected their heritage may even use a special, self-sacrificing interposition manoeuvre that keeps their ally from harm. Finally, the Undine (rant, see above), come with new attribute modifiers and the new traits that enable them to reverse emotional effects (e.g. turn fear into inspire courage) and the ability to teleport-like change places with close friends.

Editing and formatting are good, though not perfect – I noticed several typos. Layout adheres to RiP’s two-column full color standard and the pdf is fully bookmarked.

I’ll be honest: I’m not the target audience for this book. Every time I read the names of Paizo’s Genasi-races, I feel a swell of nerdrage wallowing up from my stomach and the need to spew bile. That being said, this pdf is innocent regarding that particular gripe. Additionally, I’m rather weary of adding too many races to any given campaign setting and require that a given race add something significant to my table. Thus, all the beings herein are rarely seen in home-brew and usually not as player-characters. As I said, I may not be exactly the target audience. That out of the way, this pdf does do an excellent job in that it offers players a whole plethora of abilities that actually make sense to take as a racial ability.

The tendency of “101 Pirate and Privateer”-traits to offer significant bonuses and special maneuvers, but restricting their usage to situations and 1/day or 1/week means that design-wise, there is a lot going for the traits here and that they will actually matter in game, something painfully absent from the marginal and boring bonuses inherent in most traits. However, I also feel that overall, the traits herein felt less imaginative than in the Pirate-book. There are several variants of interposition-traits and spell-like ability traits. There also are genius ones like the jury-rig trait, though. How to rate this? Seeing that I don’t have any balance-concerns with the traits herein and taking the above and the minor glitches into account, I’ll settle for a final verdict of 4 stars – this is a good selection of alternate racial options for the non-standard races, though none you absolutely have to own if you don’t plan to play such a race.