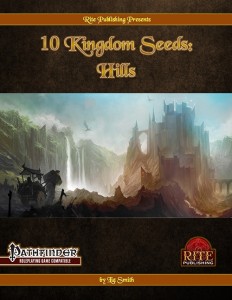 The second inexpensive pdf detailing basic villages for the explicit use of being a base for kingdom building clocks in at 9 pages, 1 page front cover, 1 page editorial, 1 page SRD, leaving us with 6 pages of content, so let’s take a look!

We begin this little pdf with the village of Appleton, famous for its flavored gins – and we are introduced to two signature buildings as well as three rumors pertaining the village. The salt-selling and rather nasty place Borley would be situated at the opposite end of the alignment spectrum at CE and a place of hardships and dangerous tasks. Deepmarble, defined by the marble quarries, similarly has a theme of hard work, though less grim.

Eastdeer, suffused with snakes of all types and sizes – for the village is famous for taming, training and selling snakes, though I’m surprised the medical/alchemical applications of snake venom have not been mentioned here – still, by far the most interesting village covered so far. Lorhayven, blessed by hot springs and obsidian mining as well as an academy seems like an interesting place as well. Redhurst is a terraced village cresting a hilltop, a river circling its base – which is solid.

Lawful evil Seahollow has an obvious layout glitch, where the fluff-text has entered right in the middle of the settlement statblock in one painfully obvious formatting glitch in the sheep fleecer’s village. Straywyn may sound elven, but is a predominantly dwarven town defined by its gem mine.

Summercrest once again would be a rather unique village, with wheeled huts constantly on the move, drawn by alpacas, we have an excellent example of truly evocative concepts here, one that really showcases how great these minimalistic write-ups can be – kudos here!

The final village, Swynford, is defined by moderately successful iron, coal and sulphur mining as well as the training of ponies and makes for a solid, though less remarkable settlement.

Editing and formatting are pretty decent, though the aforementioned formatting glitch is pretty nasty. Layout adheres to Rite Publishing’s two-column full-color standard and the pdf comes fully bookmarked for your convenience. Artworks are surprisingly beautiful and full color – kudos there!

Liz Smith’s second array of Kingdom Seeds sports several nice, minimalistic village-write-ups to base a kingdom building game on or to simply throw into your game when you need a village. At the same time, the pdf does showcase some cases where the villages truly inspire with unique concepts and ideas…though at the same time, some of the villages felt pretty common to me. All in all, for the low asking price, this is a solid little book, though probably not one that will make you gasp in amazement. My final verdict will clock in at 3.5 stars, rounded up to 4 for the purpose of this platform.