The Luchador Base Class (PF2) 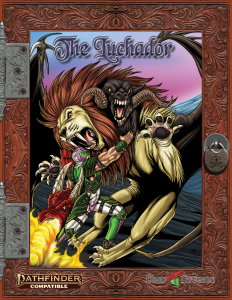 The luchador base class in its PF2e-iteration clocks in at 19 pages, 1 page front cover, 1 page editorial, 1 page ToC, 1 page SRD, 1 page back cover, leaving us with 14 pages so let’s take a look!

So, the luchador gets 10 + Constitution modifier Hit Points, and chooses whether to apply the ability boost to Strength or Charisma, the latter being the governing ability score for class ability DCs etc. As far as initial proficiencies are concerned, the luchador is trained in Perception as well as Athletics, Performance, and one skill determined by the stable, as well as 2 + Intelligence modifier additional skills. They are trained in unarmed attacks and simple weapons, and the luchador class DC. 5th level upgrades the ranks in simple weapons and unarmed attacks to expert. This improves further to master at 13th level. As far as the class DC is concerned, we have the proficiency rank increase at 11th level, which includes occult spell attacks, if relevant. 17th level increases these two to master.

Regarding defenses, they are Experts in Fortitude and Reflex, Trained in Will, and are untrained in all armor, but Expert in unarmored defense. At 7th level you increase your proficiency rank in Will to expert, in Fortitude to master. At 9th level, successes in Fortitude or Reflex saves are upgraded to critical successes. 19th level improves your Reflex save rank to master and also nets you +2 on initiative rolls.

This already looks promising, considering how PF2e is more adapt at portraying characters fighting without armor. The luchador gets Powerful Fist at first level, upgrading damage to 1d6, as well as eliminating the penalty for inflicting lethal attacks with them. 7th and 15th level net you Weapon Specialization and its Greater brother, in line with the fighter base class.

It should also be noted that we have Aerial Expertise (+5-foot status bonus to distance moved vertically and horizontally, +5 ft. for every 4 levels) at 3rd level, and the ability to execute Aerial Takedowns, a two action ability with the Open trait: Stride or Leap twice, then follow up with a Grapple if you and the enemy are in the air, allowing you to down flying targets. Interaction with nonstandard movement modes like Climbing etc. is provided. Cool!

Additionally, first level makes you choose a persona (minor niggle: there’s a blank space missing between “persona” and “class feature”); the personas are Freestyler, Heavyweight, Ki Warrior, Lichadore, Oil Wrestler and Rudo. These net you, as noted above, a skill you’re trained in (which was called stable, but that’s not a big deal), and a class feat. For Freestyler, we have Acrobatics and Improvised Weapon Training; for Ki Warriors Occultism and Ki Strikes, for Lichadores Religion and Returned from Beyond – you get the idea.

These deserve a bit of elaboration, as they significantly alter the playing experience of your individual luchador: Ki Strike nets you the ki strike spell (not in italics – an oversight that extends to multiple named spells throughout the pdf) and a Focus pool of 1 Focus Point, for example. Further feats provide additional spells and tend to increase the Focus Point pool.

Returned from Beyond nets you negative healing and a +1 status bonus on saving throws vs. positive effects. Oil Chemist nets you some Alchemical Crafting and alchemy dabbling.

Here’s the thing: The original iteration of the luchador did a pretty impressive job at tackling (pun intended) a combo-driven fighting engine; in PF2e, this is a much easier (and smoother) proposition, courtesy of e.g. the presence of the Press trait, which the pdf does make pretty good use of. Speaking of another thing the pdf makes good use of: PF2e’s modularity regarding class feats deserves special mention here: For example, if you already have negative healing you don’t need the luchador persona to e.g. take Dark Deliverance at 4th level – while the feat will primarily be accessible to lichadores, the pdf is future proofed in this regard, which is most assuredly a plus. On the other hand, where it makes sense, the persona requirements are intact: It takes a luchador with Ki Strike, for example, to learn Hand of the Lich. Only a freestyler can learn to escape a Grab or Swallow Whole as a reaction.

I also rather enjoyed seeing that the pdf provides a great in-game justification in line with rules for having a higher weight and retaining the grappling options: With Giant Frame, your weight doubles, affecting the maximum size category you can Grapple and what can Grapple you.

Of course, there are class feats building on each other, such as the AC-enhancing Shoulder Roll reaction, which can be improved to include a counter attack. What about setting yourself on fire to buff your attacks (sans harm to you?) as a sequence building on Oil Chemist? Yeah, very much a cool option.

Of course, suplexes are here as well, and we have the obvious elemental strikes based on ki; more interesting to me (and most assuredly some other fans of the class’ first iteration) would be the fact that the dual identity and Charismatic leader/star-angle imho work better in PF2e than they did before; making enemies Doomed 1 at high levels, downtime abilities and more are provided, and with capstone abilities that net you undead apotheosis and mask phylactery, controlling grappled targets and more, the class feat engine does an impressive job at rendering the PF2e luchador at once flexible and distinct; there are feat trees, but as a whole, the freedom to make your combos and customize the class accordingly is neat indeed.

The aforementioned ki-based spells are all provided (6, to be precise, and conditions/damage with regards to spell level, actions, etc. checks out for them); we get two backgrounds (Masked Inheritor and Stable Trained), and we get 6 items for the luchador, beginning with wrestling oils and silk masks at first level, all the way up to item level 17 championship belts. The pdf also covers how PF races (including orcs) handle luchadores and closes with a sensible luchador multiclass archetype.

Editing is very good on a rules-language and formal level; on a formal level, one reference to stable instead of person and the missed italics for spell-references irked me somewhat, but not in a way that would compromise the pdf. Layout adheres to a two-column standard with green highlight, which remains pretty printer-friendly. The artworks are full-color, and the pdf comes fully bookmarked for your convenience.

One can see Michael Sayre’s expertise with PF2e on full display here, and the class actually showcases a lot of what I like about PF2e. This is not simply a 1-to-1-conversion of components; instead, the pdf showcases how the thoroughly robust core engine of PF2e renders combo-based fighting styles such as the one championed by the luchador work in a much smoother manner. If I take a look at this and the PF1-iteration, I consider the PF2e version to be superior in pretty much every way. The class presented here remains in line with the core tenets of the game, while providing a significantly smoother gaming experience. In short, this is an impressive beast of a class. While there are a few formal hiccups, I can’t justify rounding down from my final verdict of 4.5 stars, and frankly, the playing experience is so smooth and enjoyable, this also earns my seal of approval.

This is how you show off the strengths and improvements of a new system.

You can directly support Drop Dead Studios here on patreon.