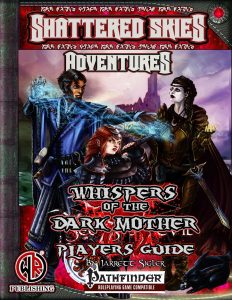 This Player’s Guide for the “Whispers of the Dark Mother”-series clocks in at 16 pages, 1 page front cover, 1 page editorial/ToC, 2 pages of SRD, 1 page advertisement, 1 page back cover, leaving us with 10 pages of content. It should be noted that a nice full-color map of the area featured in the AP is included between SRD and back cover.

The modules takes place in the nation of Bryndell, defined by the worship of ancestral heroes and begins in the town of Brighton, a relatively busy little trade-hub (and available for free if you require further details!). With such a background, it should not come as a surprise that seasonal adventurers, common folks taking up swords instead of plowshares, are not uncommon – but the relatively open nature of the environment also mean that characters from other backgrounds can relatively easily fit in within the story to be told. The pdf also provides from the get-go a relatively concise overview of the common knowledge in the locale – the Laughing Dragon as the “Adventurer’s pub” is mentioned and similarly, the mysterious beast that supposedly haunts the area and has remained conspicuously silent for a long time… Beyond that, if you require some motivation for adventurers of a more scholarly or pious bent, there is a bit of guidance for those as well.

The pdf also specifies, from the get-go, the theme of horror the AP will try to maintain as a leitmotif – and as such, it comes as no surprise that flawed heroes are preferred. A selection of a total of 8 flaws are presented and taking one will not only enhance the roleplaying aspect of the series, but also conveys a +1 trait-bonus on Knowledge (local). This bonus is pretty fixed and if you have access to other flaw-featuring books, I’d suggest adding them and the trait-selection they usually feature to the selection. Still, not a bad collection.

A total of 3 different feats are included in the deal: Bravado of Olde lets you add Cleave to the end of your charges – and all follow-up feats of Cleave. Pretty strong option there. Flyer’s Remorse is pretty amazing, though: As a move action, it lets you ready an attack versus a flying creature – if it moves within your 1st range increment, you may shoot at it, re-readying the attack thereafter if you expend an AoO. This is mechanically interesting, and the prereq makes sense. Like it! Heroic Legacy, finally, nets you +1 to atk and damage when facing a creature with double your HD or 3 or more creatures with HD equal to your own. Yeah, not that cool.

Next up would be a selection of 10 traits – Combat traits include a damage bonus with holy water and better atk with polearms; there is a trait that represents having grown up in the cult of the dark mother and there’s one that represents having drunk enough to be more resilient against poisons. Similarly, pilgrims can be found and 1/day bonus damage, being a survivor of ogre’s aley – there are some seriously nice, flavorful traits here, with one of them actually containing two different options, bonus-wise. Nice.

A total of 6 spells can be found within the pdf as well; Grey Maiden’s Tears let you weep ashen tears in a basin to contact a passed individual – provided you have someone mourning the respective individual. Emergency Succor is powerful, but interesting – cast as an immediate action on a target that would be reduced below 1 hit point, it transfers the excess damage to the caster and actually sports a caveat that prevents it from being cheesed/negated. Gran’s Minor Lance lets you conjure forth a lance of force energy to throw at your adversaries, hitting everything in a line – basically, an AoE-variant of magic missile with a short range and a save to negate….with the added use of acting as a short-duration lance before that. The wording could be more explicit/slightly streamlined. The improved version of the spell has functional, but still non-standard verbiage, in its stating that the attacks with it are calculated using the spellcasting ability modifier of the character in conjunction with BAB. It also no longer allows for a save to negate, which is powerful considering the spell’s damage type, but also valid, considering its spell level. Nice catch – the lance’s return to the hand of the caster includes a caveat that avoids the issue of iterative attacks.

Sinew Spasm is relatively interesting, enchanting a corpse to attack a target – though RAW, the spell has an issue in that it does not specify that the target square for the corpse to attack needs to be within the corpse’s reach; RAW, the corpse can twitch and spasm into pretty much any area of the spell. If this is the intended function, it should have been made more clear. There is also a spell that drops a rock on targets in an area. It should be noted that rules-formatting in these is not always perfect – the latter spell, sky stone, has for example a Saving Throw-line that reads: “Reflex;” – that should be “Reflex negates” and the text e.g. does not capitalize Reflex properly. This is not necessarily a big issue, but if you’re picky with the like, it can be slightly annoying.

On a more positive note, the pdf does offer two pieces of equipment – the grapple arrow, which can help bring down flying foes, and the weighted javelin, a similar means to penalize flying foes. (The pdf does a pretty good job of making PCs seriously contemplate having some means to deal with flying foes…). After that, we are introduced to a total of 5 sample faiths and philosophies for the PCs to follow, all of which come with domains, favored weapons, etc. – on a slight nitpick, the goddess of the sea Amaura has one domain more than the other gods, totaling 6 domains.

Finally, the pdf concludes with the dust warden archetype for the paladin class. This archetype replaces detect evil with detect undead. Their smite is modified to only affect undead…but oh boy will they suffer: 3 times class level bonus damage on the first smiting attack and every hit of such a smite against the undead actually also debuffs their defenses. Divine bond either nets a chosen mount at-will detect evil or adds ghost touch to the available bonded weapon options. It should be noted that the archetype misses a couple of italicization instances. Decent, if unspectacular anti-undead-type of archetype.

Editing is pretty good on a formal and rules-language level; there are a few cases that sport a bit clumsy, but functional rules-language. Formatting f the rules is slightly less refined, missing a couple of italicizations and proper formatting conventions. Layout adheres to a nice two-column full-color standard and the pdf sports several really nice full-color artwork, though fans of Wayward Rogues Publishing may recognize some from earlier publications. The cartography is solid and in full color. Really annoying, though: The pdf has neither bookmarks, nor can you copy text from the pdf – if you want to use the material herein, you’ll have to either print it out, open the pdf and scroll there or hand-write the effects down. I don’t get this peculiarity with Wayward Rogues Publishing’s offerings – I really don’t. Not one of the big 3pps does that and it is not particularly customer-friendly.

Anyways, Jarret Sigler, Rodney Sloan, Robert Gresham, Ewan Cummins, Simon Peter Munoz and James Edger’s Player’s Guide is actually a pretty nice book – it does not spoil the plot of the series, has some actually interesting and cool options (particularly the anti-aerial creature tricks) and is significantly more refined in its crunch than earlier offerings. While editing and formatting remain a bit of a weak-point and while I was not blown away by everything herein, this remains a nice little Player’s Guide…and it’s available for PWYW. It’s pretty hard to argue with that. The pdf may not be perfect, but it actually does have some really interesting options and is certainly worth checking out and leaving a tip. Taking its PWYW-bonus into account, I feel justified in rating this 4.5 stars, rounded up for the purpose of this platform. Take a look and check it out, you have nothing to lose!

You can get this Player’s Guide for any price you consider fair here on OBS!