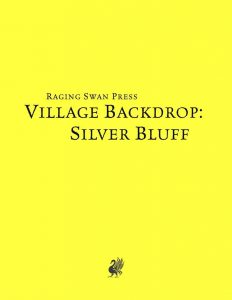 Silver Bluff is a mining town with a twist – sprung up as little more than a better camp, it began in a promising manner…but then, the mine’s silver started to run out. Let’s just say that the local population did not take kindly to these changes and the ramshackle ethnic composition alongside the lack of a governing body mean that this is very much a dangerous place to be. As far as the system neutral version is concerned, the pdf uses proper nomenclature, like thief, etc. and the conversion of the marketplace section is nice.

The vast chasm that separates the camp from the mine is also one of the reasons why this village is haunted by howling windstorms, which also influence the dressing habits of the place. The pdf does feature notes on nomenclature, appearance of locals and 6 rumors for your convenience. The village also features notes on the local tavern, paranoid representatives …this is not the nicest place to spend your time, though e.g. mountain climbing equipment and a local dwarven cleric can help adventurers here. The pdf also features no less than 6 sample events…and one glorious hazard, which would be the semi-sentient, disintegrated machine that slowly regains its sentience and becomes a lethal, unique hazard – stopping it will be hard. The hazard has been converted properly into the context of old-school games.

In an example of less is more, the notes of what’s hidden in the chasm feel a bit less intriguing and tied to the settlement – by emphasizing the wind theme instead, it would have become even more compelling…but that may just be me.

Mike Welham’s Silver Bluff is an evocative village with unique hazards and a nice theme. While it does not reach the apex of the series, the village still remains an excellent purchase and is well worth the low asking price. The system neutral version does not lose any component of the appeal of the original iteration. My final verdict will clock in at 5 stars.