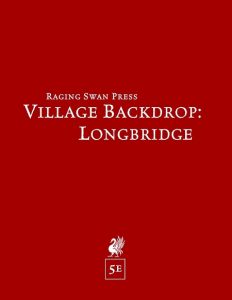 This installment in Raging Swan’s Village backdrop-series, converted to 5e, is 11 pages long, 1 page front cover, 2 pages of advertisement, 1 page editorial, 1 page ToC, 1 page SRD and 1 page back cover, leaving us with a total of 5 pages of content for the village of Longbridge, so let’s take a look!

Longbridge is, much like famous Riverrun, crucial to the crossing of a particular river – only that a) it’s smaller and b) its leadership is divided – claimed by both Wido Gall and Hilduin Lorsch, two sets of taxes, laws and regulations have made Longbridge a hotbed of intrigue and a powder keg whose fuse has been lit – it’s just a matter of time before it blows – especially with Einhard Kochel, leader of the free merchants seeking to claim control for himself…

Following the tradition of the series, longbridge gets a beautiful b/w-map as well as village demographics, a lore-section and 6 different whispers and rumors as well as notes on the type of folk that can be found in the settlement and their nomenclature. As before, it remains my firm belief that some backgrounds or classes should gain bonuses regarding the unearthing of village lore.

9 notable locations have been provided for the town alongside a stunning b/w-rendition of it and,as before, we don’t get statblocks in the 5e-iteration of the village backdrop in question, instead using the freed space for extended discussions on local legends, environs or extended notes on the back story of characters. Longbride was a particularly statblock-heavy installment in PFRPG, though, and so, we expand the sample event table to 10 and also get a 10-entry strong, fluff-only table that depicts sample travelers crossing this nexus…so, depending on what you’re looking for, this one may be significantly superior for you.

Editing and formatting are top-notch, I didn’t notice any glitches. Layout adheres to RSP’s two-column b/w-standard with gorgeous b/w-art and the pdf comes fully bookmarked for your convenience and in two versions, one optimized for screen-use and one to be printed out. As always, RSP’s patreons get the high-res maps as well.

Creighton Broadhurst, mastermind of Raging Swan Press, publishes not nearly enough of his own designs – this village is yet another stellar example of why I stand by this statement: Creighton GETS relatively realistic, gritty fantasy. Almost all Raging Swan Press offerings are suffused by a sense of historicity often lost in the more fantastic offerings and this village is no exception – oozing a sense of authenticity, this settlement comes alive on its pages. In spite of the relative brevity of the supplement. Add to that the great artwork, the awesome map and the sheer potential of the volatile situation and we have a place suited for violent insurrection as well as politics on a locale scale – and everything in between. My only gripe would be that I would have loved this to be a full-blown 32-page town-supplement rather than “just” a village. This loses none of its appeal in 5e and may even work better due to more space for the descriptive elements. Final verdict? 5 stars + seal of approval.

You can get this excellent village here on OBS!

You can directly support Raging Swan Press here on their patreon!