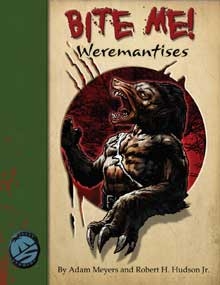 This installment of the Bite Me!-series clocks in at 22 pages, 1 page front cover, 1 page editorial, 2 pages of SRD, 1 page advertisement, leaving us with 17 pages of content, so let’s take a look!

I won’t lie, I really am excited about weremantises – there is something utterly cool and alien-esque inherent in the concept…so what is the mechanical frame-work like? Racial-stat-wise, weremantises receive +2 Dex and Con, -2 Int, making them lopsided and geared towards the more physical pursuits. They are treated as both shapechanger and a chosen humanoid race for all effects and purposes of vulnerabilities to type-specific effects. They are medium and gain lycanthropic empathy when interacting with mantis-like beings, +2 to Perception and Survival and gain a beast form transformation into a giant mantis; this alternate form can be maintained for Constitution modifier + character level hours a day, minimum 1. On a nitpicky side, the rules-text does uncharacteristically refer to abbreviations instead of the full attributes and isn’t consistent in that regard, using allcaps once and just “Con” in another. This is purely aesthetical, as far as glitches are concerned, though. They gain DR 2/silver that scales with level progression up to DR 10/silver when in hybrid or beats form and are vulnerable to wolfsbane and take extra damage from silver, also losing any DR to it.

While I’m not a fan of the lopsided component, I actually really like the weremantis here; beast form’s basics and 7th level-progression are accounted for, just fyi…and it is here that I consider it to be pretty brutal, with base lunge from the get-go. Also: Grab added to claws. Somewhat odd: The beast form/companion-stats provided here have no header, which looks a bit abrupt. Depending on the game’s relative power-level, that may cause problems, but as a whole, the weremantis as presented here would be allowed in most of my games. As a minor nitpick, I do think that it would have behooved the weremantis to have some unique tricks to set them apart beyond those gained by the beast shapes…wolfsbane vulnerability feels weird to me. No specific age, height or weight-table is provided.

A rather cool component of this pdf would most certainly be the fact that, in flavor it also takes a step beyond the well-tread concepts of lycanthropy, with society being matriarchal (obviously) and an empress ruling over the weremantises. Thus, typically race traits are a more complex component than usual, with males and females getting different race traits (and yes – traits for both genders are included and you may disregard that divide) – from being lethal seducers and growing up as privileged to being revolutionaries, the traits use the correct bonuses, are balanced and fun. No complaints.

The gender-divide resulting from their societal structure also extends to the archetypes – females can become alchemical lycanthropes (or were-alchemists, as the actual, non-header text calls the archetype…odd discrepancy…), which replaces bombs with gaining class level evolution points while in hybrid or beast shape. A discovery grants an extra evolution point and 11th level adds transmogrify as a bonus extract. The Mantis Exile rogue male adds Fly to his class skills and 6 + Int skills per level. This slight decrease in versatility is explained quickly by the power of the ability granted instead of trapfinding: You get +1/2 to initiative and may always act in a surprise round, though you remain flat-footed until you act. Instead of trap sense, the archetype gets +5 feet movement, +5 every 3 levels thereafter. Never combine that archetype with rocket launcher tag high-tier mythic games; apart from that, you should be fine! Both genders may become mantis monks, who also gain Fly as a class skill and gains Feral Combat Training (claws) instead of 1st level’s bonus feat, explicitly allowing for the use of claws in conjunction with flurry of blows. 2nd level provides a monk’s unarmed attack progression for the claws instead of that level’s bonus feat and 4th level and 8th each increases maneuverability while flying.

The pdf also features a subdomain of destruction, consumption nets 8th level and higher characters the benefits of death knell after consuming sentient creatures. The pdf provides favored class bonuses for the Core, APG and UC classes as well as magus – no complaints here, apart from the cosmetic deviation of italicizing class names instead of bolding them. The pdf also features a total of 8 feats – on a nitpicky side regarding formatting, a couple of them have the (hands) or (wings)-subtype I have never seen a feat have. Stealth-enhancing coloration that can be upgraded to apply to more terrains apart from forests, skill bonuses, an upgrade to Mantis Style…the feats are solid, I guess, but don’t expect to be blown away here…mostly, they’re pretty cookie-cutter.

The same can thankfully not be said about the equipment: Drugs made from powdered beetles, mantis robes, functional roped darts with barbed hooks to keep slaves in check…the items are winners and pretty cool. 5 magic items accompany their more mundane brethren and range from temporary paralysis-inducing gloves (actually balanced via low DC and duration), vermin shaping amulets, thrall collars and an emotions-calming ring that may well keep the over-enthused mantis-bride from eating you. Emphasis on the “may”. Artifact-wise, the mask of perhaps the first weremantis, powerful, yet inducing cannibal urges, can be found and interacted with – and I like its potential. A total of 4 spells complement the rules-section here: Adding scaling bleed damage to natural attacks, generating a body-dissolving mist, causing creatures to prostrate themselves or calling forth mantis swarms – all are pretty evocative in the visuals used.

The pdf concludes with 2 sample weremantises, both of which feature statblocks for all their forms – Yelok is a fighter/rogue (mantis exile) at CR 9, while Ziang is a nitojutsu sensei samurai at CR 12. Both come with extensive background information as well as neat schemes and plots to use them in your game.

Editing and formatting are okay, but not as tight as usual for Misfit Studios – there are some internal inconsistencies here and there in formatting, which, while mostly cosmetic, are a tad bit annoying. Layout adheres to the full-color two-column standard used for the Bite Me!-series and the pdf features several really nice original pieces of weremantises, with only one of them being one that I have seen before. The pdf comes fully bookmarked for your convenience. One note – as per the writing of this, the usual, more printer-friendly version of the pdf is not included in this one’s deal.

Adam Meyers and Robert H. Hudson Jr. deliver a pdf that has left me torn; on the one hand, I absolutely love what was done here regarding culture and visuals – there is some seriously cool adventuring potential to be gained from consulting this pdf. At the same time, I was pretty underwhelmed by several of the mechanical components, which felt like filler to me – particularly back to back with the cool items and intriguing culture. In the end, this pdf felt weird to me: You have this inspired, cool concept, a great culture/race and then, those oversights. As a whole, this installment feels rushed and less precise than usual for the series. Beyond that, the pdf oscillates between “awesome and cool” and cookie cutter designs. There are some true gems in here and concept-wise, this most certainly is my favorite in the series (at least among those I’ve covered), but quite a bunch of minor hiccups do accumulate. My final verdict, hence, will clock in at 3 stars, though I really wished I could give this the 5 stars that the concept deserves.

You can get these unusual lycanthropes here on OBS!