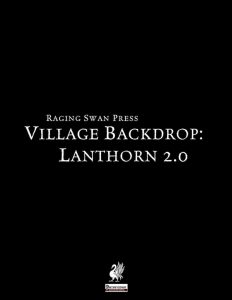 Lanthorn is a peculiar settlement – named for the magical lanterns set atop its gates, the perpetually-shrouded village is situated under a massive overhang in Kuldor Pass, where winters are long and cruel and summers but brief. Heavily defended and fortified, the settlement controls traffic through the pass and represents a gateway to the untamed wilderness beyond. Governed by a conclave of powerful wizards with an economy fueled by adventurers and fortune-seekers commissioning magic items, the village also is home to a thoroughly atypical tribe of matriarchal goblins, the Flaming Skull tribe, who also act as the village’s miners, digging strange and potent metals from the earth for their eldritch masters. This is where the new 2.0-version takes some additional material on board, mentioning a series of different sample individuals in Raging Swan Press’ classic fluff-centric write-up. It should be noted that this does include references to quite a bunch of specific magic items, as well as notes on hiring goblin hirelings. Utterly baffling: The settlement statblock information present in the original has been purged.

Creighton Broadhurst’s second trip to Lanthorn makes an already amazing settlement even cooler. Content-wise, I’d genuinely claim that it is worth checking out for owners of the original pdf. At the same time, I can’t help but feel horribly disappointed by the lack of mechanical representation for the frickin’ lanterns that grant this place its name. I also don’t get why the settlement stats present in the original version have been purged for the PFRPG-version of 2.0. Personally, these two disappointments would make the pdf a 3-star file for me as a person; however, particularly if you don’t own the original settlement, you should treat this as a 5-star file instead. My final verdict will lock in between both, at 4 stars.

You can get this version of the village here on OBS!