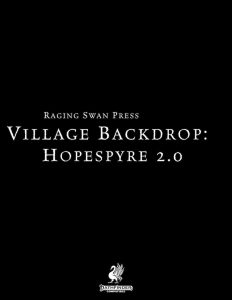 The expanded 2.0-version (both in system and supplement) of the supplement depicting the village of Hopespyre is 13 pages long, 1 page front cover, 2 pages of advertisement, 1 page editorial/ToC, 1 page SRD and 1 page back cover, leaving us with 7 pages of content, so let’s take a look at the settlement!

The expanded edition of Hopespyre includes plenty of the things we have come to expect from the series: We get information on local lore, notes on the appearances and dressing habits of villagers, flavor-centric write-ups of key NPCs, some rumors to unearth, etc. The write-up for the village does feature a proper general marketplace section, with price properly adjusted for PF2, though one of the items is not properly in italics.

When I read “Hopespyre”, my first association was that of a rural, gothic place, of dark fantasy – a religious tyrant burning unbelievers (or those in his path) at the stake; I thought about a place of oppression. Pretty much the obvious is the case. Hopespyre was founded by a visionary half-orc blessed by the flame as a refuge from the sins of his former life and now represents an enclave of per se nice people, who are still considered heretics by the vast majority of outside forces. Still, the Church of the Redemptive Flame seems to be benevolent, claiming that the eternally blazing pyre in the middle of the place actually burns away past sins. The PF2-version has properly converted the magical effects of the pyre, but somewhat to my chagrin, the supplement does not capitalize on PF2’s cool ritual-engine: The pyre is custom-made to offer religious rites, and misses that chance.

Interesting: Hopespyre is not fixed in a specific environment – instead, the supplement presents advice on how to make it work in forests, hills, islands, etc. This is a good idea, but the implementation is somewhat ineffective: No GM needs it spelled out that some low hills conceal the village; having some terrain-specific hooks here instead would have been a wiser use of wordcount imo. On the plus-side, the deity-write-up has been properly adjusted, including a Divine Font and Divine Skill entry, for example. Speaking of properly adjusted items: The Makers’ Hall sub-marketplace’s items have been appropriately adjusted for PF2.

The dressing table has been expanded for the 2.0-version, now sporting a total of 20 entries for dressing and events where the original had only 6, which I most assuredly appreciated. The addition of notes on local customs and traditions also was nice to see.

Jacob W. Michaels is a damn talented author and this pdf pretty much showcases some of his talents – by being as versatile as this pdf is, the village of Hopespyre actually constitutes a fun, unique place that utilizes themes and motives in a rather complex, interesting way – and yes, this settlement can actually end in heart-rending tragedy, allowing you to explore quite a few themes not many supplements explore. Hopespyre is a crown-jewel in the series. In many ways, this is a great supplement; and yet, I can’t help but feel that its pyre is a great example of a supplement not making use of the awesome things that PF2 can do, that other systems can’t. This village is conceptually great, but it falls short of living up to PF2’s potential. As such, my final verdict will be 4.5 stars, rounded down.

If I helped you find something cool, I’d appreciate it if you considered joining my patreon.