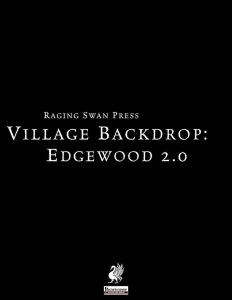 Okay, if you don’t have the original PFRPG-version, get this right now – it’s one of the best Village Backdrops! This review will very much take the previous version into account and offer the perspective of how this update fares in comparison to the original and whether it’s worth getting again if you own the original.

Edgewood can pretty much be a somewhat isolated town, though not excessively so; it lies at the edge of the Shadetimber woods, and it is subject to woes. Founded roughly a hundred years ago, it wasn’t affected by major upheavals since its founding, but in spite of this, the town hasn’t seen much population growth since the original 90 settlers. The settlement has the trademark level of detail of the series, sporting a market place, rumors, naming conventions for villagers and the like, etc. Odd and strange, in fact – unlike the original iteration, the second trip to Edgewood lacks the settlement statblock information in the Pathfinder version. I do not understand this, as gp values and magic item marketplace section are still here.

The 2.0 version of the settlement greatly expands the notes provided in trade & industry, law and order, and presents a massive 20-entry table of dressing and events that lets you customize the village in a wide variety of ways and add unsettling or strange occurrences to the process of exploring this place. Similarly, we now get a page that features a beautiful b/w-artwork of the region alongside notes on the surrounding locales.

To the point, in fact, where the settlement inspired me to an extent where I have to decide which of the countless ideas I’ll run with. This is more compelling than most full-blown mystery modules and is ultimately better, more captivating, than the couple of pages have any right to be.

If anything, version 2.0 has held up remarkably well; visiting this place once more made me realize that this still is one of the best entries in the entire series. At the same time, I am not sure I’d necessarily recommend the Pathfinder 2.0 version to any who already have the original. Since the original version was already pretty much perfect, there wasn’t much to be added in my book, so for anyone who has the original, I’d actually advise in favor of giving this one a pass; the suddenly missing settlement stats, used in the original iteration in a clever manner, further drive this home. If you don’t have this yet, I’d strongly suggest getting this ASAP if you enjoy a good mystery sandbox to only add PCs and stir. How to rate this? Well, as a whole, I consider this to be inspired and great, but the loss of the settlement statblock and fact that the 2.0-version doesn’t bring that much improvements to this one, my personal verdict will be 4 stars. That is, UNLESS you don’t have the original version. If you don’t have the original Edgewood, consider this to be a 5-star + seal of approval masterpiece instead. My official final verdict will be in-between, at 4.5 stars, rounded down.

The original version may be found here!