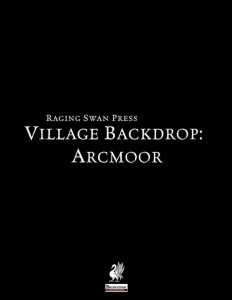 The village of Arcmoor has first appeared for Pathfinder in the Dweller Amid Bones Collector’s Edition.

Arcmoor as a settlement has its origins steeped in conflict – it is the place where the hero Therald Arcmoor fell, commemorating the final battle between the civilized races and the orcs of the severed ear – 300 ft. away from the feared Tuskwood. With a majority population of halflings, the settlement obviously comes with a massive array of supplemental information: We receive information on the village’s demographics, whispers and rumors, nomenclature and clothing habits as well as local lore and marketplace-information. In an odd design decision, the Pathfinder settlement statblock information, including danger rating, which was very much present in the Collector’s Edition (CE), has been cut here. Beyond that, the original CE-version of the settlement had a solid haunt, which has also been removed in a decision I frankly don’t get.

That being said, as always, the map provided is glorious and represents the privacy the local populace cherishes with the village being relatively dispersed – one can even see where halflings and humans live. The village also provides 4 NPC write-ups one can encounter here; in an odd decision, the fully realized statblocks for some of these villagers from the CE have not been included here. Beyond that, the village, being close to the ancient battlefield, has drawn a less than nice person living in the village, one with a strange agenda.

On the plus side of things, the stand-alone supplement version of Arcmoor does have new content that elaborates on the life in Arcmoor, provides more detailed notes on local trade and industry, and we now get a full 20-entry table of dressing and events that allows us to bring the village closer to life. Similarly, the aforementioned Tuskwood is not only fully mapped, it does also include a variety of different pieces of information regarding the surrounding locality.

As for the keyed locations of the village itself, the presentation has improved: The respective write-ups now feature easy to paraphrase read-aloud texts, suggested random encounters for the nearby battlefield, and lists of strange and unique goods that may be scavenged or unearthed from the chaotic general goods store.

Fabian Fehrs’ Arcmoor (additional design by Creighton Broadhurst) is a per se cool little village that manages to feel lived-in and alive – and in many ways, this supplement presents the superior iteration of the settlement. On the other hand, I was seriously puzzled and somewhat irked to see the cuts made to the village, when the respective content not only already exists, but is serviceable. This could have been the expanded, superior edition of the village; as presented, it removes some meatier aspects and adds several really nice flavor components; don’t get me wrong: I like Arcmoor as presented here more than I did enjoy the version of the village first presented, but I can’t help but be puzzled by the decision to cut perfectly functional Pathfinder content; ideally, you’ll have both this and the Dwellers Amid Bones CE for the whole picture, but why go that route? As such, my final verdict can’t exceed 3.5 stars, rounded down.

I’d rather suggest getting the Dwellers Amid Bones Collector’s Edition adventure here, though!