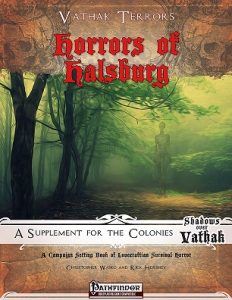 This supplement for Shadows over Vathak clocks in at 12 pages, 1 page front cover, 1 page editorial, 1 page ToC (which looks a bit sad with only 4 lines – probably would have fitted on the editorial-page), 1 page of SRD, 1 page advertisement, leaving us with 7 pages of content, so let’s dive in!

After a brief introduction to the matter at hand, namely monsters: We begin with the CR 1 Poxivum, which has a rather cool description: The tiny plant looks like a grotesque cross between a big onion and a human heart, scurrying around on artery-like appendages. The powerful plant seeks to attack itself to a victim, being surprisingly powerful for its size, an starts feeding off the target’s Constitution, gaining regeneration while sated. Hard to kill, these creatures nauseate their victims…but on the plus-side, they are susceptible to positive energy and their stench actually repels vampires, so there’s that. On a nitpicky note, one of the abilities refers to “Dex bonus” instead of Dexterity modifier, but that’s basically a cosmetic complaint. On the plus-side, a disturbing artwork-montage is provided for the critter – think “heart with spider legs sticking out”. The critter is cool in that it can go both ways – apocalyptic means of survival, threat or calculated risk…pretty cool. And I can see nobles and tyrants forcing their slaves and subordinates to stagger around with these parasites attached…grim and creepy!

The Vaquire is a particularly nasty water-undead that can form vortices under water, energy drain foes…and drown them. If it succeeds at the latter, it also possesses the target. OUCH! The vampire skull/water artwork provided here is also rather nice. Compared to the other two creatures, this one feels significantly less inspired; it’s not bad, mind you…but it’s also not too awe-inspiring. A somewhat amorphous possessing undead; with a water theme. Not as common as athe air-theme…but yeah.

The final creature would be the CR 13 nightsun, a Huge orb of grey plasma that emits a desecrating light and infuses the area with the minor negative-dominant planar trait (cool idea!) – instead of being healed by its own aura, it gains fast healing depending upon the number of undead it shines upon. Oh, and it does get channel negative energy, just fyi. At the same time, the nightsun can actually help undead weakened by the sun…though at a price: Undead leaving its light suffer Charisma damage – an idea for a kind of undead sun cult? A deadlight drug? Pretty damn cool. The sun-themed SPs of the critter are modified and the creature even modifies the Strength damage of unholy aura, instead inflicting blindness. However, at the same time, these lethal aberrations are susceptible to water. Okay, this one is a pure winner. It works well as a boss, as a story-monster…or simple as something to dread.

Editing and formatting are very good on both a formal and a rules-level – I noticed no significant glitches. Layout adheres to Fat Goblin games’ beautiful two-column full-color standard for Vathak-supplements and the pdf comes actually with bookmarks, in spite of its brevity – kudos! The artworks in full color deserve special mention – with an almost photography-like style, they feel…pretty real. rather impressive for a pdf of this low price point!

Christopher Wasko’s Horrors of Halsburg were a pretty positive surprise to me – Fat Goblin Games, I and monster books don’t have the best of track records, but this one pretty much delivers. While I have not completely picked apart all three statblocks, the functional basics were correct where I picked the critters apart – kudos! Apart from the one hiccup in an aesthetic gripe, I found no significant problems here. More importantly, though, would be that 2 out of 3 of the creatures herein are killer. 2 out of 3 ain’t bad indeed and for the low and more than fair asking price, that quote is pretty good. In the end, I will hence rate this one 4.5 stars, rounded up to 5 due to in dubio pro reo – a cool supplement with some unique, horrific beasts.