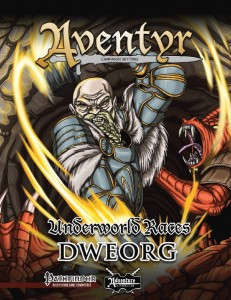 As with the other installments of the Underworld races-series, this one kicks off with a massive mythology of the subterranean races, a collective origin history that can be potentially transplanted from Aventyr into other settings, should one choose to do so. From there on, the dweorg are described – amidst the numerous dwarven races forged from the ancestry of the dvergr, the dweorg could be called those most in line with conventional dwarvenkind in other campaign settings – apart from better craftmanship and gruff demeanor (penalizing social skills when interacting with upperdwellers), they adhere to the regular dwarven virtues and attributes. Not only are the dweorg the dwarves closest to surface dwellers, unlike many races of the underdark, they are not utterly evil and rather an unappreciated vanguard against the threats from below.

Now as has become the tradition with underworld races-pdfs, we do receive quite an array of new favored class options, which include faster extract preparation (which may be a bit situational), better fighting with bludgeoning weapons etc. and “dwarven” weapon specializations. On the very nitpicky side, reductions of arcane spell failure by 1.5% per point may be a bit wonky -while the default is to round down, I’d complain here, but the fact that sufficiently consequent investment in it nets a heavy armor proficiency might be considered a cool idea, so I’ll let that one slip.

Now we do get a racial archetype, the dwarven Smithkin fighter – endured against the elements (and non magically to boot), these guys are better craftsmen of things both mundane and magical, are limited to bludgeoning weapon groups regarding weapon training and may imbue weapons first with the flaiming, later with the flaming burst quality. An okay archetype, I guess, and one that receives a glorious full-page full-color artwork, but also an archetype that simply isn’t that interesting.

A total of 7 racial feats are provided and one in particular is BRUTAL – clanmind lets you share in all teamwork feats of any dwarf from your hometown for 1 round wis-mod+1/2 level times per day as a swift action and also improves aid another – this makes the dwarven phalanx of home defenders VERY dangerous. Conversely, gaining fire resistance 5, 10 and 20 and the same for cold just elicited yawns from me – not bad, per se, but also a far shot from being interesting.

Now item-wise, we are introduced to a new spice, fungal rope and the new material called liavous crystals, which mimics adamantine, but is cheaper – at the cost of losing all potency when exposed to sunlight. On the magic item side, we have this installment’s winners – the Pocket Anvil and the Instant Forge – with the anvil coming with full rules for being used as a missile (I sneak attack with an anvil!) and the forge making adventuring + crafting feasible. Two thumbs up for these! Finally, we are introduced to 3 (6 if you count the variants) new spells: One that grants the subject knowledge of dweorg history and variants of the cure x wounds spells that have greater effect on dweorg and a stew that greatly increases hit point recovery rate when resting.

All right, Mike Myler & Julian Neale’s Dweorg…I’ll come out and say it, when compared to other Underworld races-pdfs, this one feels a bit…bland. The FCOs, feats and the relatively lame archetype didn’t wow me (with one feat exception) and the spells didn’t either. The pdf is relatively brief beyond the general origin myth provided in all Underworld Races-pdfs and while the production values are great and awesome, the two magic items alone can’t really pull this one back up – it simply does not deliver that much inspired content for a brief pdf and falls slightly below even the book on drow – had we received more culture, more information on what makes dweorg unique, whether crunch or fluff, I would have felt otherwise, but as written, this one simply felt a bit flat. And yes, this may be rather harsh, but I actually considered it somewhat boring, especially when directly compared to the no way perfect, but inspired book on the dvergr and their great archetype. My final verdict will hence clock in at 2.5 stars, rounded up to 3 because the items and great production values do not deserve a 2-star-rating.