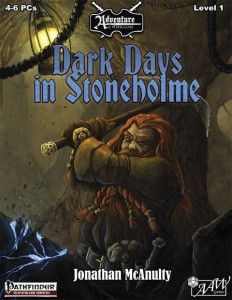 This underworld introductory adventure clocks in at 30 pages, 1 page front cover, 1 page editorial, 1 page SRD, 1 page back cover, leaving us with 26 pages of content, so let’s take a look!

So, we begin in the subterranean dwarven city of Stoneholme (which comes with a schematic map), generally a pretty hospitable place as far as the underworld is concerned, though here, as well, the forces of evil just wait for goodness to stumble: A sect of Dispater-worshipping devil-cultists has put into place a series of machinations to bring the city wholly under Dispater’s control. And, as befitting of master-schemers of infernal patronage, the basic plan does not directly involve them – instead, the PCs are brought together by circumstance, as they witness one particular version of the strange phenomena that have haunted Stoneholme – this would be waves of supernatural darkness that even clouds darkvision – the PCs meet at the intersection (fully mapped) of two minor streets -as suddenly, a wave of darkness sweeps the terrain. Children scream, afraid. And suddenly, as the darkness lifts, fiendish shadow-rats and a fiendish lesser shadow make for a demanding first encounter – with abilities to temporarily become incorporeal, the NPC carrying holy water should make for a welcome addition to the party’s efforts. If the PCs do not immediately jump at the chance to investigate this strange phenomenon, the subsequent 3 minor combat encounters will do that…

Anyways, the morning after the initial combat, the PCs receive an invitation to dinner with one influential individual – Shtawn Deppenkhut, advisor to the king. (Slightly ironic for Germans – “Depp” means “idiot” in German…) – he does offer them compensation and points them towards an abandoned glassworks, where, purportedly, darkness is lasting, rather than just a wave. He gives them a pendant, holy water and send the PCs towards the dilapidated glassworks, where the PCs can find a darkness-maintaining gem and test their mettle against more shadowy creatures as well as a shadowy dretch – it seems like the forces of the abyss are involved.

Indeed, with the help of advisor Deppenkhut, the gem and demonic influence point towards the Sandstone Warrens, where a particular tribe of goblins is allegedly known to have created such gems – in order to reach the warrens, the PCs will have to scale a massive wall of razor-sharp slag, brave earth-infused spiders, not get eaten by vampiric mist and finally, clear the Felltooth goblin’s temple – a fortified, relatively dangerous environment with dark-infused adversaries as well as a templated human wererat high priest. The dungeon is solid, though I do not get why we don’t get a player-friendly map of the warren as usual. It is here, the PCs can find nuggets of solid, supernatural darkness and hints that point towards the involvement of the Flintblade dwarves… How all of that turns out, though, is another story.

Editing and formatting are very good, I noticed no significant glitches, though the read-aloud text is not as clearly ffset as in most AAW Games-modules, requiring closer scrutiny of the non-boxed text. Not a detriment, mind you, just something to be aware of. The pdf’s layout adheres to a gorgeous two-column standard and the book sports nice artworks (though you may know some from Rise of the Drow, since that book also features Stoneholme as a sidetrek). The pdf’s cartography is great, though I’m a bit saddened by the dungeon’s map not coming with a player-friendly version.

Jonathan McAnulty can write. Seriously, when I read the premise for this module, you couldn’t have imagined me more blasé about it. So, shadowy-foes, gobbos, a sprinkling of outsiders? Oh, haven’t heard that one before. */sarcasm* I was pretty surprised by several things: One, this module dares to challenge the PCs. The shadowy foes are not just the obligatory boss – they’re the main antagonists. While the goblins and their creatures remained okay, the boss of the module is BRUTAL. Seriously, this module may sound all cutesy from the premise and it isn’t long. It’s much harder than it looks at first glance.

And it plays much better than you’d imagine. While the subterranean backdrop could have imho had significantly more influence on the story (you could run this on the surface sans major modifications…), it is ultimately Jonathan McAnulty’s skill at adventure-crafting that saves this book from being only average – it plays much better than anticipated and in fact has me excited for more. At the same time, you have to be aware that the unique darkness-wave-effects could have been used more extensively and in ways that further increase the dynamics of the combat, when herein, they fall slightly short of their own potential. My final verdict, hence, will clock in at 3.5 stars, rounded up to 4 due to in dubio pro reo.

If you’re using fantasy grounds, you can get a version here on OBS!