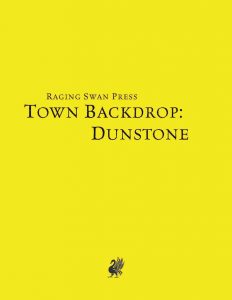 Big plus: The system neutral version comes with its own, customized market place section of magical adventuring goods to purchase: Minor ones, obviously, but still nice to have and kudos for making a distinct one for the old-school crowd!

As always in the series, we do receive information on local nomenclature and dressing habits, town lore to know about the place, provided the PCs do their legwork and 6 sample whispers and rumors that act as adventure hooks (or good ole’ misinformation). As a whole, Dunstone looks like a town that had its heyday – its old ruler Benjamin Oksanen mirrors that, though his grandson Aavo, whose father was lost in the spire, seeks to change all that: His plans include tax incentives to draw in merchants and he wants to re-establish the Knights of the Eternal Watch as a more formidable force. He also is willing to have adventurers chart out the canyons and crags that lead to Gloamhold. In short: He seems to be hell-bent on breaking the lethargy that has taken hold of what once was the first line of defense against the darkness below.

As a minor note for the system neutral version: While the pdf correctly references thieves as such, it does use “wizard” and “bard” as viable notes for the fluff-only NPCs – personally, I don’t mind that, but someone is bound to complain when I don’t mention that it doesn’t say “magic-user.” So yeah, there you go.

There’s another thing to be aware of, and this requires a MAJOR SPOILER. Potential players should jump to the conclusion.

Only referees around? Okay, so the BBEG is an intellect devourer, not exactly the most commonly available monster. While *MOST* folks will know what this is and should encounter no issues, I figured I should mention that for the context of the system-neutral edition.

John Bennett’s Dunstone is a great hometown-style place for PCs – it’s idyllic and nice and has some serious changes looming in its future. The threats that hide behind the veneer of calm lethargy are very real and a competent GM can easily work with the flavorful place. That being said, I couldn’t help but feel that it is a bit reliant on Aavo as a character – he seems to be a savior-like figure, the big hope, if you will – and while that is nice and dandy, the focus of the town on this man for the meta-plot does limit the pdf a bit more than e.g. the complex political situation in Dulwich. This is a nice, serene town and certainly a place that the PCs will want to protect, but to me, it felt more linear, less versatile. Where Dulwich set my mind ablaze, this one has its story pretty much written for you. I don’t mind that too much, courtesy of John Bennett’s excellent prose, but I couldn’t help but feel that a bit more complexity in the general set-up and a decreased focus on the main conflict would have helped this town shine more. The missing events and hints of illicit goods could have yielded the ways to heave this town to the levels of excellence, perhaps with some strange drug or other small, tidbits of dressing? That being said, getting a proper marketplace is a big plus for the SNE-version – kudos!

You can get this cool town here on OBS!