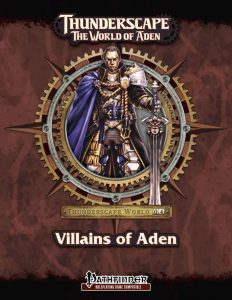 This Thunderscape-supplement clocks in at 17 pages, 1 page front cover,1 page back cover, 1 page editorial, 1 page ToC, 1 page SRD, leaving us with 12 pages of content, so let’s take a look!

Okay, like the last supplement in the series, this pdf focuses on depicting named NPCs with their respective stats and brief histories – so let’s see if this one fares better!

Well, if the Smoketown Bandit, a CR 4 jurak alchemist radically opposed to Mekanus’ industrial infrastructure is anything to go by, then partially, but not wholly: The build is missing its daily bombu-use, bomb DC, and unless I overlooked something, their damage is off as well, which is a pity, for the discovery-selection is neat. Arcus the Black (CR 11) once was a member of the Radiant Order but his slow descent into anti-paladin-dom isn’t really justified, which struck me as weird, considering he’s got an arena where he pits the captured against each other and legions of soldiers. He, like the previous character, and all but ONE NPC in the entire book, is missing his threat-range and critical multiplier. Big no-go. His CMD is also off by 1. On the plus side, I liked that favored class options and ability score improvements taken are explicitly noted in the pdf.

Bilefang, a rapacian fallen (befouled) 7, is interesting: The survivor of a horrible catastrophe, he has found solace in his unique, grotesque and mutated state, and uses his powers as a killer for hire. Nice one. Durreal the bloody, a level 1 thunder scout, acts as a horribly-scarred vigilante. His signature vehicle’s stats are not included, and yes, I noticed a hiccup in the stats as well. Goremax Bloodhorn, a CR 9 ferran brute golemoid (juggernaut) was once a feared bandit lord – but when he was considered to be slain, his will persevered and allowed him to reach a mechamage, and he became a golemoid – I like that idea. He is tough well-armored, but oddly, two of his magic items are not in italics.

Infectious Elanna is one of the more interesting characters herein: The CR 7 entomancer is obsessed with insects carrying infectious diseases. Her CMD is off, big time. Verminous servant stats are not provided. Karigitha, a serpentine-blooded Jurak sorcerer captured and brainwashed by naga, is a tragic figure, and comes with a sidebar that talks about the possibility of redemption here – I liked that. Unfortunately, I e.g. did notice e.g. spell DCs noted being off. The Shogun (the one character who correctly lists threat-range/multiplier) is a samurai 5/slayer 5. The build lists a feat called “7”, which I couldn’t find and assume to be a glitch. The swamp lord is a CR 15 master summoner who is missing his spell save DCs and has other glitches as well. On the plus-side, abbreviated minion stats are included.

Tovar, the Grand Kazan of the High Steppes, is facing a challenge he probably won’t be able to win, against a jurak contender…and we all know how the desperate can cling to power. This CR 13 villain is super interesting, in that he stands to lose everything. His mount’s stats, are absent from the book, even though his rage powers include ferocious mount and trample. The Iron Tyrant Lord Marlek Urbane gets a huge and compelling background story, and is a genuinely complex character: Both heartless despot and one of Aden’s greatest heroes ever. AWESOME. His artwork is similarly amazing. Rules-wise, he is a paladin (shining knight) 14/fighter (tactician) 4, and gets CR 17 – I assume due to resources! I really like that, in spite of his alignment, he’s not an antipaladin, and his faith and doctrine are fully explained. This fellow’s build is also one of the more challenging ones and worthy of such a legend. I’d go so far as to say that this fellow is also the hero of this supplement, as it’s easily the most interesting construction within. The final NPC herein, Wamba the Mad, is an elven witch who curiously seems to ignore that fact…she is thoroughly obsessed with immortalizing her legend…and insane. Kid most of the time…but, well. She is multi-facetted, and from small tidbits about her character to this dynamic, I liked her story, if not her build, which, you guessed it, does have hiccups. No familiar stats included either.

The pdf concludes on a strong note, with two villain organizations, namely the Gray Masters and the Nameless Ones – both are strong and inspiring, but don’t sport any actual organization rules – they are all about flavor, but do that well.

Editing and formatting, on a formal level are good; on a rules-language level, this is a deeply-flawed offering, though not as uneven as the Heroes of Aden book – there is more consistency here, and the builds are more interesting as well. Layout adheres to Thunderscape’s two-column full-color standard, and the pdf comes with 2 neat full-color artworks I liked seeing. Annoyingly, the pdf lacks any bookmarks, which is a comfort-detriment.

Shawn Carman, Chris Camarata, Rob Drake and Rich Wulf have certainly improved since the last book of NPCs. There are, writing-wise, some real gems and cool villain concepts in the book; there also are some less exciting ones, but as a whole, the lore is neat. The statblocks, while less problematic than in the last book, unfortunately still suffer quite a bit. There are a lot of small hiccups herein, though they tend to be at least somewhat consistent. You *can* use the stats here and get a CR-relevant villain…but the errors are still a downside, particularly the annoyingly persistent threat-range glitch, hiccups like daily uses missing, and off DCs. The latter is particularly puzzling when the build focused on getting that DC up via feats… So yeah, rules-wise, there is still quite some room for improvement. The absence of any companion stats, even for classes that have it as a crucial feature, is JARRING. Seriously.

And yet, it represents an improvement in writing, in build-quality, and as a whole, while I consider this to be a mixed bag on the negative side of things, I’ll round up due to in dubio pro reo from my final verdict of 2.5 stars.