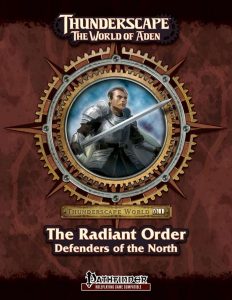 This Thunderscape-supplement clocks in at 17 pages, 1 page front cover, 1 page back cover, 1 page editorial, 1 page ToC, 1 page SRD, leaving us with 12 pages of content, so let’s take a look!

In case you are less familiar with the lore of Aden, the radiant order is essentially a knightly organization that is pretty much deemed to be a good paladin’s order, and while as a whole, a good organization, it thankfully is not depicted in the usual, one-dimensional manner we get for such organizations. Also, of course, due to the order being essentially the government of Arasteen, as the king always hails from the order’s ranks, and the council of Templars is the only body that serves as checks and balances regarding the king/queen’s edicts, with only the bishops of the radiant path rivaling the order’s influence. As most familiar with Thunderscape will have indubitably deduced, the Radiant order obviously follows the edicts of the Radiant Code as a belief system.

The pdf recaps the code and also comments on the by now strained relationship between the order and the seers, and, as a knightly order, settling disputes via duels is covered – and yes, this does have legally binding consequences. The radiant order, with its access to education, can also act as a vessel for social mobility, as exemplified by a farmer’s tale…and the book does not draw a picture of an order devoted solely to warfare and combating the Darkfall: Instead, we also learn about the hospitalers, who are essentially squires who may or may not take up the knightly duties at one point. The process of attaining knighthood, and the duties that accompany it, are described in detail.

Beyond those ranks, there are the Templars – and only those invited may join these ranks, and they may only be replaced after retiring or being confirmed dead. This, obviously, means that there are plenty of roleplaying opportunities hard-coded into this aspect of the order. Above these austere people, there are only the King/Queen, and the Paladin – who is the King/Queen successor, always chosen from among the Templars, and acting as a tiebreaker and mediator, where required. Beyond these basics, suggestions for handling player character interaction with the order are provided.

After this, we learn about persons of note within the organization, with 4 nuanced NPC-write-ups of the order’s leaders provided. While we learn about their rough powerlevel by means of class-levels etc., no stats are provided for them. The pdf then proceeds to give brief summaries of the enemies of the order and their quarrels with it, before providing four new archetypes: The first of these would be the radiant crusader paladin, who replaces smite evil and aura of justice with a variant of barbarian rage sans exhaustion and debuff-components (4 + Cha-mod rounds per day, +1 round per additional level attained), with the bonuses upgrading to +6 at 11th level. The bonus granted by the ability is not properly typed. 5th level makes the paladin enter such a state of zeal whenever they cast a paladin spell, for rounds equal to spell level, and these rounds don’t count towards the daily allotment – a clever way to justify the low number of rounds per day. This replaces divine bond.

The radiant emissary is a rogue, who replaces trapfinding with using optionally Intelligence modifier to Bluff, Disguise, Diplomacy and Intimidate. Sneak attack is slowed to a die increase every 3 levels. Poor guy….but hey, they do get smite evil, and may select cleric spells via the minor and major magic rogue talents, and choose a talent that 1/day as a full-round action, nets Intelligence modifier as a bonus to a saving throw. This bonus remains until reassigned. The radiant path cleric must exemplify justice and compassion, and as such must select glory, law, liberation or war to represent justice, community, good, healing or protection to represent compassion, as domains. If the cleric selects all domain spells from one domain, he gets an additional ability, a kind of virtuous resonance: For justice, this is a buff for allies when he downs a foe, for compassion the option to sacrifice hit points when healing via spell or channel energy, granting the target twice that amount as additional healing.  The radiant scholar wizard chooses a cleric domain at first level, adding the spells to the spell list, and gains a spell slot per spell level, which can only be sued to cast these domain spells. Spells not usually on the class list may only be prepared in these special slots. At 8th level, one of these spells may be chosen to be cast spontaneously via slot expenditure. This replaces arcane school and bond. 5th, 10th and 15th level net another domain.

The pdf closes with the radiant redemption spell, which takes one hour to cast and clocks in at 2nd level for clerics/oracles, palas and inquisitors: At the end of the spell’s casting, the target takes at least three paladin vows, gaining a +1 competence bonus that may be applied 1/round to atk, skills or saves, with the benefits lasting up to a week. Violating an oath makes the caster aware, and ends the spell. Such a violation also requires atoning for the violation. Interesting buff!

Editing and formatting are very good on a formal and rules-language level. I noticed no accumulation of serious hiccups. Layout adheres to Thunderscape’s two-column full-color standard, with nice full-color artworks. The pdf lacks bookmarks, which is an unnecessary comfort-detriment.

Rich Wulf and Shawn Carman weave an interesting yarn in this supplement, and personally, I very much enjoyed the lore-centric approach taken to this organization. While the archetypes are not exactly mind-bending or novel, they do serve their purpose and add some local color, if you will, to the characters. That being said, I couldn’t help but wonder if inclusion of prestige/organization rules for the order wouldn’t have made membership potentially a bit more rewarding for the PCs in question. Tracking prestige etc. can very well be a rewarding angle, particularly in more rigid organizations like this. Anyhow, as a whole, I consider this to be a worthwhile offering if you’re playing in Thunderscape. Beyond Aden, there’s less of a draw to get this, as the concept per se is not that novel or unique. Fans of Aden, particularly if you’re playing in the setting, should round up from my final verdict of 3.5 stars. Those using these supplements for scavenging purposes might wish to look at another Thunderscape book instead – unless you’re intrigued by the order. All in all, my official verdict will take the intended use into account, and hence also round up.