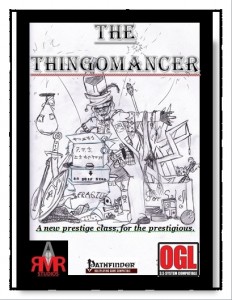 This pdf clocks in at 9 pages, 1 page front cover, 1 page editorial, 3 pages of SRD, 1 page back cover, leaving us with 3 pages of content, so let’s take a look!

Thingomancers possess and use many…things. As such, they need to be chaotic, have Craft Wondrous Item and be able to cast 3rd level spells and have at least 5 ranks in Appraise…and Craft (backpack making). The PrC nets d8 HD, 6+Int skills per level, 3/4 BAB-progression, 1/2 Will-save-progression and full spellcasting progression. Thingomancers also gain proficiency with all martial weapons.

At first level, they get the Thingamajig-ability, crafting a special backpack that has the characteristics of a bag of holding type I, with the caveat that he can only have one of these and may retrieve items from it as a move action. This upgrades to type II at 5th level, type IV at 9th level.

Also at first level, the PrC learns Thingomancy, adding class level as a bonus to Perception to detect objects (i.e. not creatures) and UMD. Starting at 2nd level, the PrC gains Eschew Materials as a bonus feat (formatting flawed: Feats are depicted in capital letters, not italicized) and the thingomancer is always treated as though he has 2K Gp worth of costly material components, though the value is taken from the total gold he has – no cheesing possible…kudos!! This GP-amount increases per level beyond 2nd by +1000 GP. The capacity to pull costly components from thin air refreshes upon resting. At 3rd level, Thingomancers get their class level as a bonus to Disable Device (not properly capitalized in the text) and may disable magical traps.

At 6th level, the PrC gets a pool of class level x 1000 GP gold, usable for crafting purposes only. the pool refreshes every week…and wrecks the WBL assumptions completely. While this may not be much of an issue, in crafting intense games or long-term games à la Kingmaker with plenty of downtime, this is deadly.

Starting at 8th level, the thingomancer can expend a spell slot or prepared spell of 5th level or higher to duplicate the effects of a rod of wonder. Additionally, when activating such an item, he may roll twice and choose the results. On a nitpicky side, this ability lacks the activation action, though I assume rod of wonder activation as a baseline for the action to activate the ability. As a 10th level capstone, he may call forth a deck of many things and draw a single card. If he does have the item, he may discard up to Intelligence modifier cards sans activating them, but must draw an equal amount of new cards. The duplication of conjuring forth the deck also lacks the activation action.

Editing and formatting are very good on a formal level, though I’ve read books by the author with more precise rules-language and less minor formatting hiccups. Layout adheres to ARMR Studios’ two-column b/w-standard and the pdf has no bookmarks, but needs none. The b/w-artworks provided are surprisingly nice for a PWYW-product – kudos!

Angel Miranda’s thingomancer is a solid take on the crazy prepared-type of character and the theme. That being said, it is a tad bit less precise in activation actions than I would like it to be – while drawing items can be assumed as a baseline, actually spelling it out would have been nice. The lack of a specific-items caveat is a bit annoying, but the one thing one really needs to be careful with is the crafting pool: While perfectly feasible in fast-paced campaigns, any campaign without stringent time frames can make the tons of free crafting gold at 6th level very strong.

And yes, due to my propensity for cursed items (or those that belonged to powerful entities), I have ample experience with crafting-heavy PCs…and yes, such a free gold-pool kills basically the main means of reigning such characters in. This does make what would otherwise be a surprisingly cool PrC problematic. That being said, this is still a PrC available as “Pay What You Want” and as such, its minor glitches do pale somewhat. My final verdict will hence clock in at 3.5 stars, rounded up due to it being PWYW and in dubio pro reo.

You can get this PrC for any price you want here on OBS!