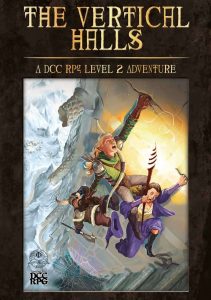 This review is based on both the pdf and the print version; the print version is a perfect bound PoD-softcover, with a b/w-interior. Special mention deserves the b/w-artwork: With one exception, the b/w-artwork is actually pretty top-tier and rather surprising in its number of pieces; the convention of DCC-adventures featuring pretty lavish maps can also be found here; the maps feature artworks and are gorgeous—Valentí Ponsa deserves applause in the aesthetics department. But my players will never get to seen them, because, alas, also like many a DCC-supplement, the module lacks player-friendly versions of said maps: One of the maps has the annoying number-labels next to the rooms (out of sight when using VTTs), but the others do not, and e.g. secret door indicators are clearly visible. *sigh* Annoying about the maps: The first level has a clearly visible grid; the second level has no grid, and the final level has a half-visible grid. The functionality of the second level is somewhat compromised at least, thus.

The module is intended for a 2nd-level party but does not specify a number of characters. I recommend 4-6; at 6 characters, the module isn’t that hard. At 4, it’s pretty challenging.

The module features no read-aloud text, and as a whole, I wished the organization of the respective text was a bit smoother; as presented, it’s very much a classic form of presentation sans any highlighters. The sequence of presentation for the keyed locales doesn’t prioritize information to be quickly accessible to the judge. I usually don’t mind that too much, but without read-aloud text, the relevant information is buried pretty deeply.

To give you an example: “Here the Geometrist would carry out his experiments involving living beings, dead beings, dead that were later alive again, undead, and…well, experiments.” That’s the first paragraph of a keyed locale. Information-content relevant for the judge? Next to 0. If you want to run this adventure, you should most assuredly have carefully prepared the entire module.

The text above should also provide some pieces of information for the astute reader. While not to the extent that it’d be a game-breaker, it is obvious that the team did not employ an English native speaker or someone with the proper skillset to properly proofread the module. DCC-purists may also scoff at the lack of the hyphen in “un-dead”, and indeed, in some ways, this is a thematic indicator for the module. The aesthetics of the adventure are significantly closer to the classic fantasy adventures laced with a few slightly weird components; this makes conversion potentially easier regarding the themes, but if you gravitate closer to the more Sword &Sorcery-esque themes in many DCC-adventures it’s certainly something to note. In many instances, the module takes a classic D&D creature and puts a somewhat horrific spin or alternate twist on it. The amount of loot also should be reduced and DCC-ified, imo.

On a personal pet-peeve level: The module does extend this at times verbose angle to rules-language; I usually don’t mind some tongue-in-cheek humor, but when I have to see “…it will start choking its victim (big surprise!) …” in the middle of a statblock, it’s really grating.

I’m not just annoyed by the use of “will”, but by the snark in the middle of the rules-relevant information. That’s the stuff a judge has to *quickly* reference. It’s NOT the place to put snarky comments.

Anyhow, there is more to talk about, but in order to do so, I have to go into SPOILERS. Potential players should jump ahead to the conclusion.

So, the module starts in the small settlement of Shadypass, which was recently wracked by a quake; and ever since, people have started falling ill, with “geometrical nightmares”, and then later, geometric shapes in front of the sick. Okay, this is cool, and the angle points towards, how should it be different, a wizard’s sanctum, namely that of the aforementioned Geometrist.

You see, a magical stained-glass window was broken, and from it, the illness spread, as the imprisoned Hound of Tindalos is also the carrier of the virus. (And yes, the hound is a potentially brutal “super-boss” of sorts.) The tindalos-virus is pretty cool and acts as a multi-stage ailment, with stage 4 = death by hyperpyrexia (blood boiling).

Structurally, the module is a pretty linear dungeon-crawl, with particularly level 1 being essentially a corridor of rooms, with the second being a mincer of grinding gears. So, the thief gets to the other side and clears the path? Heck no, that would be sensible and reward player skill. Instead, the room requires the proper magic (not a given in DCC), and falling can split the party between two levels in the unlikely event of the falling character surviving. So yeah, this is also what I meant with the D&D-aesthetics; I can’t help but feel that this module was written for a system that assumes a higher degree of reliable utility spellcasting available than DCC.

On the plus-side, some rooms do have a pretty high degree of interactivity, with e.g. a gallery of detailed art coming with its own description; the area also includes e.g. one of the creatures that exemplifies the creature design: The darkmoantle, a twist on the darkmantle with cloaker-esque fear-moaning and some debuffing ability; this also is one of the leitmotifs for one of the dungeon’s factions. These include the amalgams, which are the caretakers of the halls and there’s also essentially a flesh golem by another name. The other factions are a spider/human missing link, the attercopus that creates spider-vomiting husks. Essentially, this is an Ettercap-y character. Finally, there would be the “survivor” of a failed adventuring party; a middle-aged halfling who has become the ”husband” of a choker-lady and now is essentially a grotesque, fused amalgamation with her, not unlike how in some species the females start absorbing the males. This latter aspect is certainly horrifying and interesting, but the entire impact of the horrific fate of said adventuring party is something the module could do a much better part at showcasing; having the party find out the truth as they explore? That’d have been neat. As provided, the unfortunate adventurer probably will have the function of a grotesque and icky bossfight, perhaps a rather sad one, but yeah.

As you can glean from these ideas, the twists on the “classic D&D concepts” executed here are actually GOOD and interesting; similarly, e.g. a lavishly-illustrated generator room that includes terrain effects is pretty interesting, and I do think that, making the flesh golem-y thing use skills from various adventuring classes, is mechanically an interesting angle. As far as a combat-relevant aspect of module design is concerned, it does an interesting and competent job. When it comes to the non-combat aspects, the adventure flounders somewhat.

Now, ultimately, the party tries to find a cure for the virus in the halls, while navigating these twisted “bosses” and…wait. There was something about this, right? Something…

…oh yeah. These were supposed to be “vertical”, right? Well, let me divest you of any notions of a proper vertical dungeon. Essentially, this is a regular dungeon with one prolonged encounter/half level that is actually vertical. This level is awesome and has one simple rule: As long as one limb touches the “floor”, you don’t fall. AWESOME, right? Particularly since this environmental rule ties in with the aforementioned attercopus’ webs etc., this encounter can be great…but it’s just that. One encounter.

…and that is perhaps what galls me most about this module; it’s not that the module employs a “D&D with a twist”-angle; and I can live with the less-than-optimal information-design. Particularly since it does D&D with a twist pretty damn well. Structurally, I object to the instances where the module could do a much better job at rewarding player-skill over character-skill. There are also quite a few unrelated filler critters like the darkmoantle, a fire elemental, etc.

But my main gripe? This is one of the worst instances of lost potential I’ve seen in a while. For one, I was really aggravated as a person by the halls not being, well, vertical. Why not actually present a vertical dungeon? Because it’s hard? Secondly, and even worse: The module introduces this cool Tindalos-virus as a ticking clock, as a motivator. I like it, but it could be any other magical ailment as written.

Picture this: First, the entire dungeon operates like the vertical half hall, which means lots of potential for falling and actual vertical adventuring! Awesome! Secondly: It’s the TINDALOS virus. What if those infected by it could tap into it and jump through angles? That would be a GLORIOUS way to jump from certain death to another place; it could have been used to make the halls a truly unique puzzle dungeon. Picture it!!

And, of course, tapping into the power of the tindalos virus will worsen the sickness! Perhaps the hound is freed if the virus-powers are used too often? Each use = one vision of the window’s crack spreading further and further… so it’s a question of how well the party can navigate the complex without tapping into these powers.

Come on, you know you’d want to play that! I would! After I read about the virus, that’s what I was stoked for.

And then I got a relatively conventional and pretty cookie-cutter dungeon. Not a bad one, mind you, but also not one that left me impressed in any real sense of the word.

Editing and formatting are okay on a formal level, good on a rules-language level. There were a few minor nitpicks, but nothing crucial. Layout adheres to a two-column b/w-standard with nice borders and plentiful neat b/w-artworks, and original ones. The cartography is also aesthetically pleasing, but as noted above, the lack of player-friendly maps and the lack of grid etc. are comfort detriments. The pdf has no proper bookmarks (only one for front cover, editorial, back cover), so it loses points in the comfort detriment as well.

Gabriel García-Soto, with the English adaptation by José Manuel Sánchez García and proofing by Tim Snider, delivers a solid D&D module with some DCC-ish twists to the classic themes. For the most part. But that’s all this is.

The module has a PHENOMENAL idea and all the components to make it a genuinely UNIQUE and creative module…and then fails to capitalize on all these components. Instead, it delivers a challenging dungeon, but not one that will rock your world. If you’re looking for a DCC-module that hearkens closer to traditional fantasy in both its aesthetics and its design, then this may well deliver.

Compared with the many excellent DCC-modules, though, I can’t help but look at this is as anything but the sum of its lost potential. As a person, I felt deceived by the module’s title. As a reviewer, I will not take this into account.

But add to the lost potential the comfort-detriments, and even the low price-point can’t make me rate this higher than 2.5 stars, rounded down due.

If you considered this review to be useful and are able, I’d appreciate a tip via paypal, or joining my patreon. Thank you!