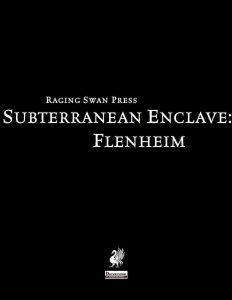 This installment of Raging Swan Press seriously underrated Subterranean Enclaves-series clocks in at 11 pages, 1 page front cover, 2 pages of advertisement, 1 page editorial/ToC, 1 page SRD, leaving us with 6 pages of content, depicting this subterranean settlement, so what do we get here?

Well, in short, a nightmare for most. Flenheim is the home of derro, to be more precise, a tradition of derro fleshcrafters and as such, also the center of a growing slave market: The Collector’s Lodge and Shadow Market beckon with their wares – the former with captives, the latter with exotic goods. The lore that knowledgeable PCs can rely upon is certainly helpful, but does not exactly create any notion of an enjoyable stay…and there is a reason for this.

Law and order, for example, are “maintained” by a Byzanthine schedule that alternates between able-bodied derro – who are not known for their sanity in the first place. The central authority of the settlement, an ancient derro, is basically impotent when compared to the factions that truly hold sway here…and here, things get dark…and wise PCs better listen to the 6 whispers and rumors to avoid being caught in the struggles of this settlement.

You see, beyond the worship of The Pure Form, a cult that is just as vile as the official religion here (worship of the tortured form, as opposed to the divinity creating it), there is more unrest fermenting within this flayed-looking enclave. (Yep, the derro take pride in applying slick substances to houses to make them look bloody….)

You see, from an abandoned dwarven fortress which may have a new master to a paladin looking for a captured lady, there is quite a bit going on behind the scenes, most notably a continuing vie for power between the “Improvers”, the fleshcrafting guild of the derro magicians, and the Flenning academy that provides the name to the settlement.

“What’s flenning?”, you ask? Well, it’s the “art” of generating melodies from the tortured screams of the derro’s victims to create symphonies of macabre horror. It’s basically more hardcore than black metal and the most vile and dissonant musical tradition you can imagine. (As an aside: Bands like Xasthur and other black metal bands that follow the “moans from beyond”-aesthetic may make for rather evocative background tracks when visiting Flenheim…just sayin’…) This tradition is ever-present within Flenheim – for the academy’s network of brass and iron tubes reach even the remotest of locales herein, allowing master flenser Herath Syngler to affect derro throughout the settlement with his dread performances…an angle savvy PCs potentially can use…or suffer horribly from, depending on the needs of the GM…

As always, we get proper settlement stats, a magic marketplace, local nomenclature and appearance as well as 6 sample events to kick adventuring into a higher gear. The pdf also provides a sample statblock for the rotating derro guard at CR 3.

Editing and formatting are top-notch, I noticed no hiccups. Layout adheres to Raging Swan Press’ printer-friendly two-column b/w-standard and the pdf comes in two iterations, one of which is optimized for screen use and one that’s refined for being printed out. The pdf has fitting b/w-artworks and the cartography of the enclave is done in excellent b/w by the esteemed Maciej Zagorski. I am pretty positive that backers of Raging Swan Press’ patreon can get a high-res version of the settlement.

Brian Wiborg Mønster’s Flenheim is nightmare fuel in the best of ways – a village of thoroughly vile and evil beings, indebted to a Silent Hill Otherworld-like/Hellraiser-esque aesthetic, which manages to create a horrific atmosphere without diving into territories that are too explicit: While horrific to look upon, the dark themes here never reach the level where they should cause problems at the gaming table. It also basically has a reason for an atmospheric, yet disturbing soundtrack built right into its very design – when handled properly by the GM, this can actually provide a big, big plus in atmosphere that’s justified by the unique properties of the enclave. (Better yet, if the PCs can manage to gain control, the results can be HILARIOUS.) In short: This is a fantastic settlement with a ton of adventuring potential. Easily worth the more than fair asking price and a final verdict of 5 stars plus seal of approval.