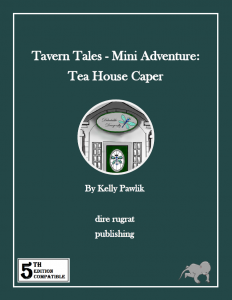 This mini-adventure, intended for use in conjunction with the Delectable Dragonfly-installment of the Tangible Taverns-series, clocks in at 8 pages, 1 page front cover, 1 page editorial, 2 pages of SRD, 1 page back cover, leaving us with 3 pages of content, so let’s take a look!

All right, only GMs around? GREAT!

Edwin Scrumple has turned his life around – gone are his days of gambling and overindulgence in alcohol…but this does not change the fact that he has lost his mother’s ring while gambling. Said ring now graces the ring of the draconian wife of his erstwhile drinking buddy, one Eva Lurancree, who not only constantly complains, but also has an uncanny ability to hit others with her barbed, snide comments where it hurts most. In short: She is a wholly unpleasant woman.

Unfortunately for the PCs, she also does not entertain much, is pretty keen-eyed and rarely leaves her mansion – which means that their best chance to actually get the ring would be infiltrating the delectable dragonfly, which Mme Lurancree visits twice a week – once for a massage and once per pedicure. Entering the place, though, is not that simple: Prim, the place’s mistress, is keen-eyed and hard to fool and she runs a tight ship – oh, and since her build is radically different from PFRPG, even her racial references have been retooled…and her lair actions similarly have been reproduced. for your convenience. Unfortunately, the inspiration-wording glitch I noticed in the Tangible Tavern-pdf has also been reproduced in her statblock.

Similarly, Eva Lurancree’s build can sap the will of those it is directed against – once again noting points of inspiration, when it probably should be dice.

That being said, the free-form infiltration does allow for various avenues for success. Both Eva and Prim come with stats, though it should be noted that this very much requires the Dragonfly-pdf to pull off: Not only for the dressing, but also for some avenues like impersonating other staff-members. The benefits of actually going the whole way with the charade and coming up with a good plan is more pronounced in 5e, which renders the task slightly less difficult.

Editing and formatting are very good, I noticed no significant glitches apart from the inspiration wording guffaws. Layout adheres to the no-frills printer-friendly b/w-standard of the series and the pdf comes sans bookmarks, but needs none at this length. The map of the place is provided for your convenience.

Kelly Pawlik’s tea house caper is an enjoyable little heist scenario for character levels 2nd – 3rd, though it can be used for higher or lower levels by modifying the alertness of the characters featured herein. It is an unpretentious, fun little module, though one that suffers slightly from wording hiccups in the unique abilities of the characters. As a PWYW-companion piece to the delectable dragonfly, this most certainly is worth leaving a tip for. While it is a bit free-form for my tastes and could use a bit more guidance for novice GMs, I ultimately am stretching here. In the end, this is well worth getting. My final verdict will clock in at 4.5 stars – and I’ll round up due to this being PWYW and my policy of in dubio pro reo.

You can get this sidetrek here on OBS for PWYW!

You can get the associated tea-house here on OBS!