Tavern Tales #3: It Starts With a Barroom Brawl (5e)

Tavern Tales #3: It Starts With a Barroom Brawl (5e) 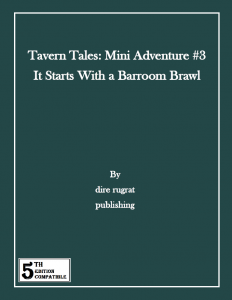 This 5e-version of the supplemental sidequest for Tuffy’s Good Time Palace clocks in at 6 pages, 1 page front cover, 1 page editorial, 1 page SRD, 1 page back cover, leaving us with 2 pages of content, so let’s take a look!

What’s Tuffy’s Good Time Palace? Well, it is a nice little tavern released in the Tangible Taverns-series before. While you can use this module as a stand-alone, it is primarily intended to add some additional oomph to the place and provide a solid go-play addition. The 5e-iteration is kind of remarkable in that the NPC-conversions are pretty lovingly done, adding some serious character to the place.

This being an adventure-review, the following will contain SPOILERS. Potential players should jump to the conclusion.

All right, only GMs around? Great! Well, remember that “former” establishment of Tuffy’s? Well, the “Endless Knights”, a group of a-hole adventurers, figured that the shady clientele inside would warrant burning the old place to the ground…including the patrons. Yeah, how they maintain CN as an alignment, I have no idea. Their statblocks are found via hyperlinks on the SRD. Tuffy is NOT happy they’re back in town and they waltzed right in, poured dwarven spirit on the bar and set it ablaze. In the ensuing chaos (Tuffy had learned to keep sufficient water to extinguish the flames), the Endless Knights make their escape, but not before adding insult to injury by filching a prized bottle of dwarven spirits Tuffy wants returned. Note that, as written, the PCs are not supposed to be present here – if you elect to go the more interesting route and throw a good brawl their way, you’ll have to improvise. Pity that the book does not provide some guidance here.

Anyways, Tuffy tries to hire the PCs to deal with the knights and they have taken a warehouse for themselves. Odd: Killing them/starting a fight may provide trouble with the authorities, while the knight’s behavior is ignored…sure they authorities don’t like Tuffy…but arson has traditionally been punished harder than murder due to the threat to the cities…

Beyond this logic bug, the little module with its b/w-cartography of the hide-out of the rival adventurers is solid apart from one of the traps lacking a Wisdom (Perception) DC to spot. The DCs of the 5e-version have been properly adjusted and the wall scythe trap in the PFRPG-iteration has been replaced with a poison dart trap. Traps are hyperlinked to a SRD, as are the stats of the rival adventurers.

Trying to reason with the Endless Knights yields pretty much nothing, so if the PCs want to succeed in getting the arsonists to Tuffy for a little roughing up, they’ll need to take them in alive…which, in Pathfinder, makes for an at least somewhat tweaked challenge. In 5e, it’s basically written per default into the system and as such, takes a bit away from the module for me.

Conclusion:
Editing and formatting are solid, with no too grievous glitches. Layout adheres to a no-frills, printer-friendly two-column b/w-standard and the pdf has no bookmarks, but needs none at this length. Cartography is functional (though it has no scale – assume 5-foot-squares per default) and while there is no player-friendly version of the map, at this length I don’t necessarily expect one.

Kelly Pawlik’s “It Starts with a Barroom Brawl” is a decent sidetrek – while the eponymous brawl is intended to be pretty much absent from the module per default, it is the aftermath here that is the meat of the mini-module. As a means of further fleshing out Tuffy’s, it does a decent enough job; as a standalone, it loses some of its charm and becomes a rather generic endeavor. That being said, at the same time, this is a PWYW-product and as such, it deserves a bit of slack. It’s not a module that’ll be remembered for ages to come, but it deserves being checked out as a bonus if you already have Tuffy’s. Hence, my final verdict will clock in at 3 stars – if you have the luxury of choice regarding system, this time around I’d consider the PFRPG-version slightly superior to the 5e-version, unlike quite a few of the tavern-supplements.

You can get the 5e-version of Tuffy’s here!
Endzeitgeist out.