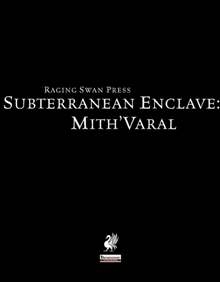 Mith’Varal, literally meaning “mithril” and “mine” in Dwarven, was once a frontier’s town nestled at the shore…wait, what? Yes, thankfully, this subterranean enclave becomes interesting almost immediately by virtue of its uncommon geography – founded underground on a mithril-rich peninsula, a river runs through it and it saw its heyday of prosperity. Alas, this time has waned, the fate of all mining towns – one fine day, the ore ran out. Mining continues to this day, but Mith’Varal’s name has taken on an ironic shine and slowly, a sense of desperation creeps into those still here, still hoping for a reversal of fortunes.

Which also makes for a portion of the town’s internal strife – most miners are still commanded to dig in Varal Tarak, whereas a group of hidden, seditious miners is exploring other mines, hoping to be lucky at one of those places. Then there also would be the guards of the place, the rather creepy “Faceless Guards” with their mithril masks, some of which may hide more than a greedy heart behind their featureless visors and their fully statted leader Gunar Hammerblow… And then there would be, one particularly nasty overseer of a dwarf and testament to the cliché that some dwarves are simply greedy, vile-tempered bastards… Events and whispers also mirror these themes of glory lost, repression and quasi-totalitarian work-camp like atmosphere -“of course our miners are free to go..:” Yeah, right. And what of the Thegn? Well, coincidentally, he has not been seen in public for years and neither has he given any public audiences…weird, right?

Editing and formatting are top-notch, I noticed no glitches. Layout adheres to raging Swan Press’ two-column b/w–standard, with superb cartography in b/w. As always, you can download player-friendly maps on Raging Swan’s homepage. The pdf comes in two versions, one optimized for screen-use and one optimized for the printer, with both being fully bookmarked.

Brian Wiborg Mønster delivers a different kind of dwarven settlement – one resounding of the old trope of dwarven greed, yes, but here said greed is turned towards their own people. The at first subtle theme of totalitarian control and military dictatorship starts resounding with the reader and takes an interesting turn once one realizes the difference in mindset that would have made for a boring rebel vs. oppression story and instead turns it somewhat on its head – the dwarves *want* to work, to mine. The issue is how to go along doing it! Once could, of course, read a criticism of corporate culture red tape and limitations imposed on employees into the sub-text of this enclave, but I’m not sure how many of my readers out there would appreciate me going on and on about the history of Marxist criticism, capitalist philosophy etc. – hence, I’ll cut to the chase:

I loved this installment. My one gripe is purely cosmetic and pertains to the fact that the location on a peninsula would have made making this a subterranean coastal town possible – which would have been highly uncommon and a tad more iconic. Since this constitutes my only gripe with this pdf and is utterly dependent on my own tastes, my final verdict will clock in at 5 stars + seal of approval.

You can get this cool settlement here on OBS and here on d20pfsrd.com’s shop!