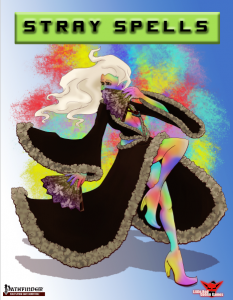 This pdf clocks in at 27 pages, 1 page front cover, 1 page editorial, 2 pages of SRD, leaving us with 23 pages of content, so let’s take a look!

Okay, so the idea of spells becoming sentient humanoids isn’t new, but surprisingly, I have never seen the concept to be actually applied to a playable race, so the pdf does tread some new ground here. We begin the pdf thus with the “biology” if you will, of these sentient spells. Stray spells are, per se, immortal, though in practice, they always run the risk of being transcribed – this is a kind of Highlander-esque process where they can consume each other – the process takes 10 minutes, but more on that later. Stray spells are grouped in categories, depending on their spell school, with some specifics included – stray spells born from dispel magic, for example, tend to end up as loners…after all, their raison d’être would be the destruction of other stray spells – interesting nurture vs. nature angle for roleplaying here.

Speaking of interesting roleplaying opportunities – in a process not unlike transcription, two stray spells can fuse, budding basically into the analogue of offspring in an agendered, somewhat hermaphroditic process that could, e.g. generate fiery hail storm stray spells or even more interesting combinations – the only limits here, from a narrative point of view, are the ideas of those involved.

Racial trait-wise, stray spells get +2 Int and Dex, -2 Con, are medium native outsiders with a 30 ft. base speed. While sleeping, they gain a 50% miss chance, which is weird – does it stack with other miss chances? I assume no. “Anything that affects incorporeal creatures affects them.” You get the idea here – the racial traits, while understandable, don’t really adhere to the default formatting conventions, which may irk some of you. I felt the need to mention that, but let’s move on: They gain darkvision 60 ft. A stray spell can transcribe helpless stray spells or casters that are capable of casting 6th level spells or higher (or SP-equaivalents) when coup-de-gracing them, gaining temporary hit points equal to thrice the highest spell level the creature could cast or twice the creature’s HD if it was a stray spell, whichever is higher. These hit points last 1 hour and thankfully don’t stack with themselves. Stray spells “automatically makes an opposed caster level check against any attempt to dispel them, using their full character level as their cast level.” I have no idea what that’s supposed to mean. A) That’s not how dispel magic or comparable checks work. B) How does this there even need to be a check (by whatever weird mechanics that’s supposed to happen), when the stray spell makes the check automatically?? They take damage upon failing the check and make end up being transcribed by the victor. But…I though they automatically make their check? That’s when it finally dawned upon me how that ability works: Basically, the roll a character level check against dispel attempts; they don’t automatically “make” the check, they just roll it, as a kind of saving throw substitute. -.-

After my initial annoyance over the rather wonky wording subsided, I found myself enjoying this drawback. As living spells, they are detectable by magic…and they have a spell form: They choose a spell of 3rd level or lower – as a standard action, they can turn themselves into a one-handed spell completion item that can be used by uttering the stray spell’s name as a command word. They use their highest mental attribute modifier as governing attribute modifier. A stray spell may be cast a number of times per day equal to 6 + the HD of the stray spell, minus 2 x the chosen spell’s level…which would translate to 3rd level spell access at 1st level. This is very strong, considering the potential AoE-damage output or the option to gain fly et al. at 1st level and should, as such, have some careful GM oversight due to the wide open nature of spells. Big plus: What can be used and what can’t while in this form are generally concisely codified and e.g. DR possessed translates to hardness, they have ego, etc. While not in any way a reliable indicator of power, they do come with RP-values, if you’re using them to gage general potency.

Random starting age and height/weight notes are included, as are favored class options for a couple of classic classes and some classes by LRGG. The racial paragon class does not get a favored class option, being already exclusive for the race – this class would be the stray king, who gets 2 + Int mod skills per level, proficiency with simple and martial weapons as well as light and medium armor and shields, excluding tower shields. They have full BAB-progression and good Will-saves. Spellkings may transcribe spellcasters of 2nd level or higher and non-spell-completion/trigger items, provided the Cl of the item is equal to or less than the Max Spell Level (which starts at 0th and increases to 9th) – transcribing items never yields temporary hit points, only spells.

Wait, what? Well, the class gains transcribed spellcasting: Upon transcribing a creature, the stray king gains 1 spell the transcribed creature knew or 1 spell used in the construction of an item. The stray king thankfully can only hold ½ the character level (should probably be class level) spells this way; the original spell of the stray spell does not count towards this maximum. The maximum spell level they can transcribe thus is similarly capped per level and such spells may be spontaneously cast, with Charisma being the governing spellcasting attribute. Stray kings begin play with 1 +1/4 stray king level starting spells thus known…and, as you may have gleaned, the existence of the class has some seriously cool roleplaying ramifications – which the pdf acknowledges and talks about! Kudos there!

The spellcasting engine of the stray king, just fyi, is not your run of the mill system either: Instead, the class begins play with 4 stray energy and increases this amount every level – casting a transcribed spell requires an expenditure of stray energy points equal to the spell level. The stray energy amount scales up to 40 at 9th level, which remains pretty conservative – and that’s a good thing, considering that the class can pretty much cherry-pick from diverse spell-lists, provided they kill the foes… 2nd level and every 4 levels thereafter yield a metamagic feat and 3rd level yields the option to add 1 metamagic feat to the stray king’s original spell sans level-increase. Starting at 10th level, 2 may be added for free to the stray king’s original spell, 1 to any spell the class has. This is wonky and less elegant than it should be, considering the diverging level-increases of metamagic feats – tying the mechanic to the level-increase of metamagic feats would have been a more balanced and elegant option here.

8th and 16th level increase the speed of transcription and 12th level nets, 1/day “per 2 Charisma modifier” (wording could be streamlined) the option to regain a bit of stray energy via transcription. The capstone yields a second racial spell. At 3rd level and every odd level thereafter, the stray king class receives an enhancement, basically the talents of the class. These do come with roleplaying implications (Cool!) and some are accompanied by compulsions, which may temporarily be suppressed with a Will-save. They are intended as roleplaying catalysts and not as penalties – and it is nice to see the pdf state that as such for the GMs out there. The enhancements are interesting in how they interact with the class engine: Clear vision, for example, allows the stray king to add Charisma modifier to Will saves instead of Wisdom modifier and provides basically an evasion equivalent for Will-saves…but only while he has 1 illusion spell known. So yes, these enhancements interact with the current spell array known, thus rewarding diversification over specialization in the chassis of the class. A scaling, translucent armor that may be a bit overprotective, automatically transcribing undead (which leaves a somewhat nasty scent on the spell king that may offend some NPCs), swift action more flexible alter/disguise self variants, shifting temporary hit points gained from transcription to nearby allies – there are some really interesting and creative tricks here. On the annoying side – these are not properly codified by type – no idea whether they count as Sus, Sps, Ex…

A total of 8 feats are included (one of which lacks bolding for the Prerequisite and Benefit headers) that allow for the retaining of more spells, stray energy, the ability to cast the racial spell while not in spell form, extra uses in spell form, Sr equal to 10 + character level + highest mental attribute versus your chosen spell, which can be upgraded to apply to the whole school of the spell…interesting collection.

The pdf also features two sample stray king characters, Kaleido Skop, a stray spell bard and Dirk Chein, an inquisitor. Beyond these, a template allows for the creation of spell-based monsters and comes with a sample spell beast.

Editing and formatting, while not bad, are also not exactly good: Beyond some formatting hiccups, there are a couple of oversights that impede playability (ability types) and some wording choices that are a bit unfortunate. That being said, the material herein DOES work and the playtesting this received does indeed show. Layout adheres to a 2-column full-color standard with nice full-color artworks. The pdf comes fully bookmarked for your convenience.

While the option for a 3rd level spell at 1st level mho needs a nerf unless used in high fantasy/high-powered contexts, this pdf ended up impressing me more than I thought it would: The race of stray spells is saturated with roleplaying potential galore and, in spite of the wide open nature of the race, it manages to retain a sense of manageable balance much better than what I expected. Ian Sisson, Christos Gurd and Scott Gladstein have, as a whole, created one of the precious few new races that really feel different, that offer an interesting playing experience. The race is smart and fun and, as a person, I really, really like this pdf. More so than I frankly should, considering the hiccups, glitches and minor inconsistencies; with a picky dev, this would be 5 stars + seal of approval material, no questions asked. That being said, in spite of loving this pdf, as a reviewer, I must unfortunately take the hiccups and glitches into account and they do drag down what would otherwise be an excellent offering. Thus, my official verdict can’t go higher than 3.5 stars, rounded down for the purpose of this platform.

You can get this interesting, unique race here on OBS!