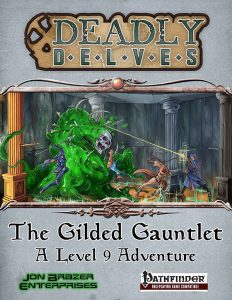 This massive module clocks in at 61 pages, 1 page front cover, 1 page editorial, 2 pages of advertisement, 1 page SRD, 1 page back cover, leaving us with 55 pages of content, so let’s take a look!

This review was moved up in my review queue as a prioritized review at the request of my patreons.

Okay, so while this *is* a massive module, it should be noted that it also doubles, to an extent, as a small settlement supplement – the appendix depicts the city of Hunstoc, which represents the backdrop of this adventure, in rather impressive detail – not only are the respective key environments discussed, we also get the full, proper settlement stats AND a one-page full-color map of the place; basically, we go above and beyond here, in a level of detail that is quite nice to see for an appendix.

That being said, you are interested in this because it is a module, right? As such, I will try to shed some light of the adventure itself, a process that necessitates that I go deep into SPOILER-territory. This means that, from now on, only GMs should continue to read on; potential players should jump ahead to the conclusion to avoid having their fun spoiled.

All righty, only GMs around? Perfect! The Lich Queen (a nod towards the classic modules or the 3-part saga made by Savage Mojo?) is served by a cadre of liches called Putrefects…and only the 3 most trustworthy and potent gain the coveted title of Queensminister, elevated beyond the status and concerns of petty mortals and immortals alike. One of the chosen few would be Chalmos, whose obsession with the accumulation of money would do a certain, famous Runelord proud, but that as an aside and potential means to contextualize the adventure in some campaigns.

Chalmos did happen to make one groundbreaking discovery, namely the creation of a device that would be capable of making Gold for a relatively affordable price, the so-called Aureus Conflux. The putrefect knew of the potentially groundbreaking change a device like this could generate and thus hid it very carefully in a complex of his own creation, murdering all potential witnesses, co-workers etc. – and thus, the Conflux has remained a secret hidden from prying mortal eyes for more than a thousand years…and it would have stayed that way, were it not for a side-effect in the gold-manufacturing process: raw mercury, which has begun spilling into the drinking water. This may not be enough cause for alarm for the outsiders and immortal undead guarding the complex…but it is most assuredly enough to put the adventurers on the trail of the strange complex…

The action starts with the PCs investigating via one of the numerous adventure hooks, the reason for the recent troubles of the city of Hunstoc and ultimately brings them almost immediately to the dungeon complex in question, for this is, in essence, a dungeon exploration. That being said, there are quite a few peculiarities that should be noted about the complex: We begin, for example, with a lead mine, which contains pools of mercury. That is the first “room” of the complex and it sets a very important tone for the whole complex, namely one that emphasizes a) a magitech/clockwork-y/steampunk-esque aesthetic: The first enemies are clockwork sentries with automatic weapons and an advanced junk golem, the mining titan. This means that the module seamlessly fits in with a variety of settings, from Midgard to Thunderscape. Secondly, these respective aspects are colored sufficiently in a quasi-medieval context to make them not too intrusive, should you prefer a more down to earth take on things. Thirdly, the room does come with a full-page battle-map-style version of the map, a process that repeats throughout the module.

This brings me to one of the most amazing components of the module, namely its full-color cartography: Beyond the GM-maps provided for your convenience, the module also comes with an extra pdf that clocks in at an impressive 34 pages; half of these are devoted to the respective maps with grids, while the other half sports grid-less maps – and these are player-friendly. This makes use with VTTs and when printing out the maps VERY comfortable for the GM. If you’re like me and hate drawing maps/suck at it, then this pdf is a godsend. More importantly, the detail provided on the full-color maps means that the module can do something that is rather important for the functionality of the module: It can really capitalize on the tactical aspects of PFRPG.

From the mercury pools in the very first encounter onwards, the dungeon makes serious use of terrain features in its combats – from the poisonous pools to stalactites falling, the way in which terrain and traps, hazards etc. are employed, is utterly remarkable. There is an array of items, which, for example, can prove to be rather helpful in dealing with some challenges herein…but at the same time, neither luck nor combat min-maxing will save the PCs alone – this module’s aesthetic very much represents a fusion of old-school, challenging dungeon-crawls: Spectral board game mini-games, the bridge of revere psychology – this complex is NOT about just rolling well; it is about honest, old-school using the wits of the player, rather than the PC, to best the challenges faced.

That being said, the tactical component mentioned before is still very much a given requirement to see this complex through to the end…to give you an example: One of the areas has, with handy, color-coded transparent overlays, the respective environmental effects all at one glance for the GM. There is a rainbow room (If that doesn’t make your PCs paranoid…) or the elemental chaos engine, which sports glyphs on the floor. In short: The combats and hazards often double as traps AND make excellent use of the maps featured.

Another peculiarity of the gilded gauntlet would be that, while it is narrative-wise not the strongest of modules, it does manage to tell its story via both direct and indirect means, blending the two to convey the information required for the PCs. Have I mentioned the section that focuses on magical mirrors? Now, yes – this is a gauntlet style adventure, as the title frankly states – this would be a module I’d expect to play at a convention…but unlike many such modules, it actually makes cohesive sense…and it blends the virtues of gauntlets with more traditional modules. What do I mean by this? There is not a single boring room in this dungeon; much like most gauntlets, each room is a highlight-room and thus, you won’t find rooms to ramp up tension or the like, no dressing rooms, no simulated living chambers. But at the same time, the module justifies its set-up rather beautifully – the *reason* for the gauntlet being a gauntlet make sense, the lack of living quarters etc. and similar dynamics are justified by the choice of creatures, challenges etc. – which unanimously sport interesting twists: Whether when facing Thallium elementals or mercurial necroplasm, the module sports adversaries that fit the environments as well as puzzles to engage the mental faculties of the players…and reaching the Aureus Conflux makes for a suitably lethal climax…and once the PCs have cleared it, there is a ridiculous amount of wealth to be gained…probably. For one, it is very much likely that the machine was damaged. And then, encumbrance is a limiting factor…and so could, frankly, be the realities of the economy, gp limits and much more. So while the probability of success should come with some forethought on the part of the GM, the module does have sufficient narrative reasons to make absconding with the gold a dangerous endeavor…

It should be noted that, while the module does use Lore in some places to determine PC knowledge, the module similarly has groups covered that do not use this skill.

Editing and formatting are top notch, I noticed no serious glitches. Layout adheres to a neat 2-column full-color standard that manges to fit a surprising amount of information on the respective page – kudos for not bloating the page-count artificially! The module features some nice full-color artworks, but from an aesthetic and usability point of view, the massive cartography in full-color, including player-friendly maps, would be the main selling point on an aesthetic level for me.

When I read the number of authors involved in the creation of this dungeon, I was frankly surprised: Michael Allen, Charlie Bell, Casey Clements, Daniel DeStephen, Michael Eshleman, Allan Hoffmann, Andrew Hoskins, Dale C. McCoy Jr., Steve Miller, Richard Moore, Sam Polak, Mike Welham – that’s a lot of authors, quite a few of which I consider to be good indicators that I’ll like a given module. Still, developer Richard Moore has done an impressive job at unifying the narrative voices of the authors to prevent tonal disjoints between the rooms.

Modules worth winning. Both Frog God Games and TPK Games have made a tag-line of hardcore adventures. Lamentations of the Flame Princess has similarly done so, but with a different focus; neither of these companies has done much with the formula of gauntlets, and for a good reason. Gauntlets are hard to make and cater to a specific demographic. And they often suck hardcore. You see, any idiot can make an unfair module and label it as “challenging”. A good gauntlet is a bit like the extreme-sport version of dungeoneering: It remains constantly challenging for PC and player; it is lethal – but it needs to remain fair. It needs to alternate the way in which it challenges the PCs and players without getting boring…and in a published adventure, it also should tell a decent story, remain plausible. In an age where hard modules result in whining by some players, where others actually cheer on unfair design and praise it as challenging, it’s very hard to generate a module that challenges veterans, yet remains FAIR.

The gilded gauntlet manages just that. This is one of the hardest dungeon-complexes I have ever had the pleasure to run, but it is hard without resorting to ridiculous amounts of save-or-suck tricks or unfair enemy/hazard placement, instead focusing on presenting a tightly-woven, intricate web of unique rooms and tricks, on showing what you can do with the format. In short, this is one of the best examples of a gauntlet-style dungeon I have ever seen…also thanks to its impressive use of blending terrain, strategy and cartography in its challenges.

This is a module that requires both brains and brawn to solve and it will challenge even groups that usually waltz through published modules. In short: This is glorious. It may not win any rewards for its story, but it doesn’t have to – it is FUN. Yes, capital letters. If you and your group are bored, if you’re looking for a challenge that blends new-school tactics and strategy with old-school emphasis on smarts, then this is the dungeon for you. I absolutely adored this dungeon and consider it an excellent and uncommon option that feels like a refreshing breath of fresh air in the genre of new school dungeon explorations. The sheer diversity of the challenges posed herein and the clever use of the maps and terrain in particular elevate this adventure beyond its brethren. Hence, it is my pleasure to award this 5 stars + seal of approval – and this qualifies as a candidate for my Top Ten of 2017.

This is not for newbies or the faint of heart, but veteran groups should adore this gem of a dungeon! I know that I did!

You can get this amazing challenge of a module here on OBS!