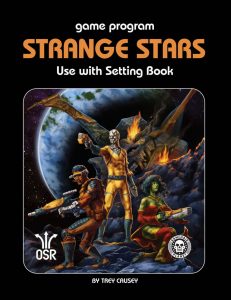 The OSR rules-book for Strange Stars clocks in at 37 pages, 1 page front cover, 1 page editorial, 1 page ToC, 1 page advertisement, leaving us with 34 pages of content, so let’s take a look!

This review was move up in my review-queue as a non-prioritized review at the request of my patreons.

Now, this is the rules-companion book for the system neutral Strange Stars-book – and as far as OSR-rules goes, it employs my favorite rules-set for space adventures, namely Sine Nomine Publishing’s excellent and deservedly acclaimed Stars Without Number. As you can glean, provided you’re familiar with SWN, the task of converting the rules material to another OSR-system is relatively simple, though some peculiarities are potentially lost in translation, as a system-immanent procedure of translation.

Anyway, we begin with a brief recap of the nomenclature of the setting, explaining terms like clade (referring to a group of organism derived from the same ancestor or template – relevant distinction in a setting where sentient robots are a thing), the definition of intelligent and self-aware being (sophont) etc. –  it is with these that we begin:

Strange Stars knows the following types of sophonts: Biologics are either humans or aliens; it should be noted that Mandate Archive: Transhuman Tech’s body-swapping rules are more commonly used in Strange Stars. (Which should also provide a nice example how well this is ingrained in SWN’s possibilities.) Bioroids are artificially-created biological beings that are worn by a mind – whether it’s an infosophont (bodyless AI) or a Ghost, Ghost in the Shell-style – full-blown transhumanist options here. Finally, Moravecs constitute self-replicating, sentient machines.

From here, we move to the specific clades: More than 20 (!!!) are provided: From domed-skull humanoids capable of cataloging language to the insectoid Blesh, the feline Djägga, the engineer isopods (with a dditional limbs and body-swapping), gnomes, the bone-clawed hwuru, avian humanoids, humanoid computers…and yes, emerald-skinned humanoids…there is a wide array of races with concisely defined abilities here. Each race gets a brief note on physical and psychological characteristics and class preferences/restrictions, backgrounds available and attribute requirements, if any. The pdf also classifies the clades by hyperspace region, which is helpful. Now, there is a downside to the variety of races presented herein – that is that they very much are reliant on the GM/referee to properly account for differences in raw power: There are several races that obviously eclipse the others in sheer power, which means that some discretion and skill is advised here.

On a more positive aside, the pdf does contain a wide variety of backgrounds to expand the background system featured in SWN – from bureaucrat to business sophont, psytech or data prospector, there are several provided, with some allowing for choices within a skill’s arrays – other than that, we have the 4 skills per background you’d expect – with some backgrounds allwowing for one freely chosen skill. The backgrounds thus can be considered to be well-crafted – no complaints.

Chapter 2 deals with tedchnology in the context of Strange Stars, beginning with the metascape, the augmented reality that most people experience – and yes, it may be hacked. The Noosphere is the cyberspace of the far future, where disembodied AIs live, for example. Implanted cyberware and brain-computer interfaces are very common, which allows for some interesting uses of the Computer skill, obviously. Strange Stars also features Fabbers – matter compilers. These act as hyper-advanced 3D-printers, while programmable matter is…well, just what it says on the tin. That these technologies have a serious impact on economy should be pretty evident. Alien and archaic tech are also mentioned.

But how does space travel work? Well, per default, it uses the Hyperspace Network erected by the Archaic Oikumene prior to the dark age and Great Collapse. Think of these as somewhat akin to Mass Effect’s acceleration nodes. The tech is partially psionic, poorly understood and travel time depends an is color-coded: Travel time equals the color modifier (ranging from 18 to 6750) time the distance modifier (ranging from 1 – 5) in kiloseconds. This is for the range of the network, mind you – space is unfathomably huge. SWN fans will note that the FTL travel is very much different from Strange Stars’ node-based system. It should be noted, though, that these need not exclude one another: It is pretty easy to drop Strange Stars within the vast universe of Stars Without Number – FTL beyond the nodes, node-only in the Strange Stars-clusters. That as an aside.

Starships are discussed as well – gravity generators and inertial suppressors would be crucial pieces of tech. The rare and sought-after drive-boxes, hyperintelligent, but not self-aware AIs crafted by the Archaic also makes for an interesting aspect of piloting spaceshifts…with potential for adventuring galore.

Beyond these, we take a look at setting assumptions (with the Great Catastrophe accounting for vast differences in tech-levels) – and these include semi-hard scifi (as a fan of hard scifi, I wholly applaud the setting’s commitment to plausibility – it sets this space opera setting apart from others) as well as the fact that intersystem travel is fast, intrasystem travel slow, thanks to the mysterious hyperspace nodes. Post-internet and transhumanism and the evolution of fiath in the vastness of space similarly represent concise components of Strange Stars. As a whole, a complex of leitmotifs I thoroughly enjoy. GMs will also cherish a brief list of the hyperspace regions introduced in the setting book: Each comes with a brief one-sentence run-down, a note on what type of story it’s best suited for and some very much appreciated inspiration books for further reading: Mini Appendix N-sections, if you will – and yes, often quoting media beyond the scifi/space opera genres.

We also get a brief adventure base-line generator: 6 basic adventures are presented: The challenge, the heist, the hunt, the gauntlet, the rescue, the unexpected. Each sports at least 2 different d8 tables you can use to generate the adventure, with 3 featuring 3 tables instead.

Next up would be a massive bestiary/NPC-codex section, with SWN’s descending AC, atk bonus, etc. all concisely codified. The entries are brief and while each critter gets at least a short fluff-pragraph, it should be noted that we do not get artworks for these. Big plus as far as I’m concerned: The nice fraction-rules from SWN are properly supported with 7 factions and we also take a look at the worlds noted in the great campaign book: We codify these with world tags (some of which are new, some changed) – there is, for example, no perimeter agency in Strange Stars, and much forbidden tech is considered to be common instead; hence, the tag’s meaning is pretty much inverted and denotes an overly restrictive world.  6 new tags, from luddite worlds to banking centers, can be found and the pdf also sports a really cool habitat generator: Habitat shapes, population…from spheres to rings or Knights of Sidonia-style cylinders and classic asteroids, the pdf covers a lot of cool aspects, including a table of natural bioclimes.

Editing and formatting are top-notch, I noticed no serious hiccups. Layout adheres to a printer-friendly two-column b/w-standard. Artwork partially reuses some assets from the campaign book in b/w, but also sports a couple of new pieces in b/w. The lack of bookmarks in the electronic version is galling – particularly considering that this is a rule-book you’ll consult more often. The electronic version hence should be considered to lose one star over the PoD-version.

Trey Causey’s OSR-rules for Strange Stars are surprisingly concise – no, really. They can definitely be considered to rank among the better OSR-rules out there, managing to implement the tight rules-language of Stars Without Numbers. Speaking of which: It is very much evident that the author is very familiar with SWN, using some of the more amazing aspects of the system in a concise manner.  That is a big plus, as far as I’m concerned – too often, relatively rules-lite systems are used as an excuse for sloppy rules-language. This is thankfully not the case here: The material is concise and well-made. That being said, without the amazing flavor of the system-neutral setting book, this obviously loses a lot of its appeal.  If I rated this on its own, I’d complain about it being sketch-like – but that’s pretty much the point here – the book is intended to supplement the setting book and I’ll rate it as such.

Now, as much as I love the vast majority of the content herein and the care which was taken to ensure SWN-compatibility, there are a couple of aspects I enjoy less: One would be that the races diverge in power – there is not a good baseline here and some species depicted here are simply, rules-wise superior. Whether you care about that or not depends on your game, but personally, I would have loved to see more advice on handling the more potent races regarding stigmas, flaws, etc. Secondly, the lack of bookmarks represents a serious detriment for the electronic version. For the print version, I think I’d rate this 4.5 stars; the electronic version loses half a star for the lack of bookmarks…and usually, I’d round up, but I feel that this is closer to the 4 for me. Hence, I will round down for the purpose of this platform.

You can get Stars Without Numbers’ Free edition here on OBS!

You can get teh core edition of SWN here on OBS!