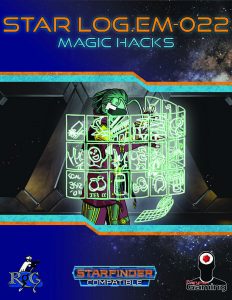 As before, we have a nice little flavorful contextualization of the subject matter in the Xa-Osoro system, noting the influence of the “Cult of .//ALL”, which I considered to be rather inspiring.

The pdf sports 3 different 2nd level hacks; Arcing Charge lets you expend an unused spell slot as a move action to charge a weapon, transforming its damage to inflict electricity damage. Nice catch: The weapons, if targeting KAC, still do so. If it does not have the arc critical effect, it gains this one for the duration; otherwise, the arc-range is expanded by 5 ft. per spell level of the spell slot expended. The hack’s duration lasts for 1 minute per level of the spell slot expended. Burning and Chilling charge are the energy type swapped fire and cold damage equivalents of this one, with burn and stagger critical effects instead, respectively. Already pre-existing such properties instead have their DCs improved for these. While the DC-increase thus possible can be pretty massive, the limited nature and cost here can be considered to be suitable.

There also are 3 5th level magic hacks: Animate File lets you expend a spell slot as a full action to search for recently-deleted files. You make a Computers check to hack, and on a success, identify all recently deleted files, with the spell slot level determining how far in the past you can reach. After this, you may spend any number of Resolve Points. You restore 2 such files per level of the spell slot expended, and gain an untyped bonus to Fortitude saves for an hour equal to the number of Resolve Points spent. The Fort-boost feels weird to me and doesn’t really make sense for me, but your mileage may vary.

The philosopher’s flash drive can be created during a 10-minute rest o regain Stamina while spending Resolve. To do so, you must sacrifice an unused spell slot. Thereafter, you can choose a transmutation spell of a level equal to the sacrificed spell’s one or lesser. That spell is then uploaded to the drive and may be used by any creature with the datajack augmentation as a swift action. Upon doing so, the spell immediately targets the creature, as though you had cast the spell. The hack takes customizing the drive into account, and notes the DC to hack these locked drives. Spells stored persist, but prevent that you regain the spell stored, preventing you from cheesing the ability. Upon regaining daily spell slots, you can choose to have all such drives cease functioning. Using a flash drive consumes it. Problematic here: RAW, this allows for the sharing of Target: Personal spells, which is something I’d eye with care. A caveat that limits spells stored would make sense here to future proof this.

Thirdly, encyclopedic cache lets you, when regaining spells and Resolve, spend 1 Resolve to select a spell on the class spell list of any level you can cast, but don’t know. You may then cast the spell instead of one you know. Problematic here: The hack does not note a condition for the reversal of the spell, which means you can slowly swap out your total spell load out. This should have a limitation.

The pdf also features two 8th level hacks: When determining the spells active in the cache capacitor, you may choose to it to ping magic instead of putting a spell in it – if you have the new Ping Magic hack, that is. If you do, you automatically detect magic (italicization missing) at the start of your turn sans action. The interval depends on the level where you take the hack – once per minute, per 5 rounds, or per round. You gain information as though you concentrated on every object in the 20 ft. ping burst. This is a cool idea, but the constant detect can be supremely annoying for the GM. The Summoned State Drive hack, finally, interacts in an analogue manner with the cache capacitor. You get to choose one creature per spell level you can cast summon monster that you could have chosen as summonable, but didn’t. This allows for better summoning flexibility. Once more, I think that a bit limiting would be nice here.

The pdf also offers the Adaptable Spell Hack feat. This nets you 3 magic hacks you don’t have, but whose prerequisites you meet and whose minimum level is equal to half your technomancer level or less. Once per day as a move action, you can get one of these for a minute. When gaining a level, you may switch out a hack, and the feat may be taken multiple times, granting an additional daily use for every time you take it. Note that you still can’t generate hack-chains thus, courtesy of the precise verbiage. Potent and restricted, but viable. Like it.

Editing and formatting are very good on a formal level; on a rules-language level, some minor caveats added would probably make sense. Layout adheres to a 2-column full-color standard and the pdf comes with a nice artwork, but sans bookmarks. The pdf doesn’t need them at this length.

Sasha Hall delivers an interesting, creative and precise pdf. Now, I am a bit weary regarding future-proofing of a few of the options herein, as the flexibility offered can be construed to be rather potent and will exponentially increase with the system maturing. Thus, a couple of limiting caveats would imho make sense. Still, as a whole, I consider this to be a well-crafted supplement. My final verdict will hence clock in at 3.5 stars, rounded up for the purpose of the platform.