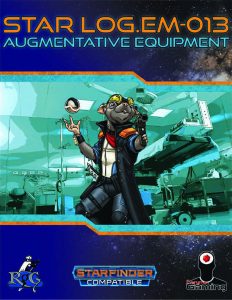 We begin this supplement with a brief look at augmentation in the galaxy and the Xa-Osoro system in general, before getting a massive table that lists the material by price and level, noting system modified as well. We also have the new weapon fusion, biointegration, which clocks in at only 680 credits, which represents the classic means of the integrated weapon. While deployed, you can’t do anything with the hand but use that weapon. Unfusing is a move action and only one-handed weapons may be fused thus – the plus-side being obviously that dropping or disarming is out of the question, and half damage dealt to the fused weapon is dealt to the character instead of the item, which can make for an interesting double-edged sword. Haha. Get it? …Sorry for the bad pun.

Anyways, we also get two new armor upgrades. Phantom emitters are classified as hybrids, and can compress armor via extradimensional means into 1/16th of the usual size sans modifying your size category, allowing you to squeeze through 1/4th your space sans counting as squeezing. While the armor is thus compressed, you have 360° vision and move via rolling, restricting you to unarmed strikes that benefit from shock, but are not considered to be archaic. On the plus-side, total defense in ball form is more useful. Weapon integration systems can be installed into light and heavy armor only and make it possible to install weapons as though the suit were a power armor, with weapon types codified properly by weapons slots granted by this upgrade.

The pdf also sports 4 different biotech augmentations. Adamantine boneplates are provided up to MK 7, granting increasing DR (or improving your existing one); as it applies to the skeleton, it has a different system than dermal plating, but they may explicitly not be combined. Good catch. Biotic Flight is added to the spinal column and comes in Mk 1 – 3, beginning with basically gliding and improving to include first clumsy and slow, then better, flight. Spiked growth depend, system-wise, on where you get them, but they enhance your climbing capabilities and provide the means to inflict piercing damage with unarmed strikes – the augmentation is presented in one version. Cool: the rules take hardness of surface scaled into account AND also provides a benefit for folks with Improved Unarmed Strike. Kudos!

Finally, the muscle mass magnifier lets you execute penetrating unarmed strikes, with 9th level plus adding critical effects. Nice! They are presented up to Mk 10.

Editing and formatting are very good, I sported no serious hiccups. Layout adheres to Everyman Gaming’s colorful and nice two-column full-color standard and the pdf has a nice artwork, as seen on the cover. The pdf has no bookmarks, but needs none at this length.

Alexander Augunas’ augmentative equipment provides several pretty crucial modifications for characters. The rules are precise and make good use of SFRPG’s item levels; the presentation is precise and, as a whole, I really enjoyed this one, as it provides some classics that I as an old Shadowrun-veteran simply expect to see from futuristic games. In short: Very much recommended, 5 stars + seal of approval.

You can get this cool supplement here on OBS! (You know you want your blade-arm…)