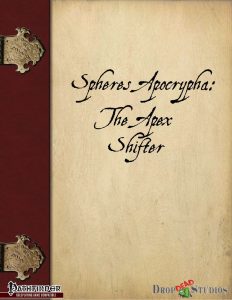 This installment of the Spheres Apocrypha-series clocks in at 4 pages,1  page front cover, 1 page SRD, leaving us with 2 pages of content, so let’s take a look!

This review was moved up in my reviewing queue because I had been tasked to cover the other Spheres of power-supplements, and I’m kind of OCD and can’t stand having something not covered yet when the rest’s done.

Okay, so this contains, obviously, the apex shifter, an archetype for the sphere shifter. A minor nitpick from the get-go – the rules verbiage tends to state “At level XYZ”, when PFRPG usually phrases that “At 3rd level…” – it’s a minor thing and won’t influence the verdict, but it bugs me as a person. Instead of endurance, we get a talent from the Alteration sphere, which may be chosen anew after resting for 8 hours. This should specify that such a talent cannot be sued for the purposes of prerequisites. It also establishes the notion that this archetype doesn’t attempt to balance its content with either the original shifter, or internally.

Extended transformation is moved to 4th level, which is a good call, since the spheres druid getting that before the shifter was a bit grating; 5th level allows for the use of shapeshift (not properly formatted) to the apex shifter as a swift action, with concentration-maintenance as a swift action. 9th level yields greater transformation – which is oddly listed before the 8th level ability, which upgrades the use of shapeshift (again, not formatted properly) as an immediate action. These abilities btw. replace the communication abilities and immunity to diseases and poisons. The capstone eliminates the need t make concentration checks for shapeshifts (bingo, not formatted – ever), and the need to pay for spell points. Additionally, 1/turn free action shapeshift.

5 bestial forms are provided: Accommodating form chooses one Alteration sphere talent (including Blank Form) granting traits; When using shapeshift, for +1 spell point one trait from the chosen form may be applied, and this does not count towards trait maximum. The bestial trait may be taken once per 4 class levels. Resistant Shift nets Stalwart (urgh) when increasing size, evasion when decreasing size. For a limited amount of rounds. This is very potent and should have a minimum level and be relegated to the mid-to high-level tiers of gameplay. Defensive shift lets you combine personal shapeshift and total defense, but makes the character staggered on the next turn. How is that in the same category as the option to gaining both stalwart or evasion? Don’t get me wrong, I like it, but it almost looks like it’s been written by someone else. Feint as part of shapeshift? Okay, can get behind that. Shifting Style requires Spheres of Might and requires one talent from Alchemy, Equipment, Tech or Trap sphere as well as Knowledge of Many Shapes (the apex shifter’s wildcard talent ability gained at 3rd level), and nets a freely chosen combat talent from a sphere that is NOT among the 4 listed in the prerequisites, getting that for 1 minute or until a new shapeshift applies. Why would you ever not take this one??

The second page contains an alternate version of the “Elementalt[sic!] Transformation” talent – Dedicated Elemental Transformation. Okay, should this one be treated as Elemental transformation for the purpose of ability interactions and prerequisites? No idea. That being said, the presentation of this one is nice: It has mutable limbs, allows for speech 30 ft. speed, 2 slams (properly codified as primary), scaling AC bonus and darkvision 60 ft. Also features scaling chances to ignore critical hits and precision damage (25% to start with, scales every 5 levels by +25%) , and the talent nets you one package corresponding to the 4 primary elements – the cool thing here would be that knowledge of an element (the talent may be taken multiple times) unlocks elemental corresponding traits for use with other forms. Minor nitpick: “Burn” in the context of the fire elemental ability should be capitalized, as lower-case “burn” does not denote the extraordinary ability, and instead evokes ideas of kineticists..That notwithstanding, I liked this one.

Editing and formatting are not good –on a formal level, the content failure to put shapeshift properly in italics makes the rules-language harder to grasp; syntax sometimes deviates in a weird way from the standard, etc. – more hiccups here than I’d expect to see in two pages. Rules language is generally functional, but internal balance of the archetype’s options are weird, and the wild-card talent stacking? Not a fan.

David Spektorov’s apex shifter is an expansion I wanted to see – I wanted to see a shifter who gets to shift as soon as the druid. The internal balancing of the bestial traits isn’t ideal and oscillates quite a bit, and as a whole, the apex shifter is a stronger option than the regular shifter, and not always ina  good way. That being said, the notion of dedicated elemental transformations is neat, and the pdf has something to offer – it’s just rough in a couple of instances, probably won’t bow you away, and with stricter editing/development, could have been amazing. My final verdict, alas, can’t exceed 3 stars, in spite of the low price point.

You can support Drop Dead Studios directly here on patreon.

If you like my reviews, please consider leaving a direct donation or supporting my patreon here!