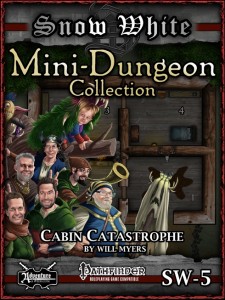 So, what do we get here? Well, basically, we get a brief expansion of Snow-White in the traditional sense – know the Huntsman’s cabin, how it doesn’t really impact the plot? Well, this allows your PCs to properly explore the potentially rather creepy cabin of the Huntsman. The cabin itself has been rigged by the Huntsman – it now sports several traps waiting for the unwitting fools that would stumble in. Nice, if you’re like me: The archetypical role of the Huntsman is made more relatable by using this mini-dungeon – there is indirect storytelling that tells you something about the motivations and character of the huntsman.

Much like the previous mini-dungeon, this is very much an extension of the main-module, highlighting what could e considered a “deleted scene” – not necessary for the plot, but more than handy to have, we get a well-written exercise in indirect story-telling. Granted, the trap-centric challenges are not that diverse and the pdf is mechanically less interesting than the best in the series, but from a narrative perspective, this can be considered a great addition to the main module. That, and Will Myers’ cabin is FREE. Free is hard to beat and a free expansion for the glorious main-module that seamlessly fits in? Heck yeah. (Oh, and if you need a slightly creepy, trapped hunter’s cabin, this’ll do the job!) Final verdict? 5 stars + seal of approval in the context of Snow-White. (As a stand-alone, it loses some of its charm – for such purposes, consider this 4 stars instead.)

You can get this neat trapped cabin/expansion for Snow-White here for FREE on OBS!
Endzeitgeist out.