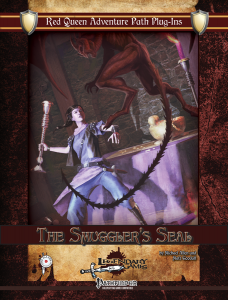 This review was moved up in my queue at the request of one of my patreons.

Full Disclosure: I have received this adventure some time ago for the purpose of a fair and unbiased review. Since then, I have accepted the position as lead developer for Legendary Games. I have no stake in this product’s success or lack thereof, as it predates me accepting this position, and I have not worked on it in any capacity, shape, way or form.

Well, first things first: This can be run as a direct sequel to the excellent “Orphans of the Hanged Man”, but it does not necessarily require that you have finished its prequel. The module does come with a full and proper array of player-friendly full-color maps. It is intended for a character of 2nd level, and the adventure comes with a new CR 1 monster, the scroll sentinel,, which is an excellent example for how damn good Legendary Games’ monster design continues to be: The creature has a cool Achilles’ hell and several unique abilities – and it does come with its own illustration. Rather cool!! A pregen is also included in the deal.

Scaling information for 3rd level are included for your convenience, and the module sports copious amounts of read-aloud text to help you evoke a concise atmosphere, including different introductory angles if the PC hasn’t played “Orphans of the Hanged Man.”

This being an adventure-review, the following contains copious amounts of SPOILERS. Potential players should jump ahead to the conclusion.

All right, only GMs around? Great! So, the old master thief, alas, finally passes away from old age; however, the Pc being his heir of sorts, does receive a letter that passes the valuable city properties one alias of the Hanged Man had, to the PC. A trip to a helpful forger later, and the PC only has a simple task ahead – slipping these forgeries into the city archives! The set-up for the region where the archives are located is pretty nice, providing benefits and notes for PCs doing their proper legwork casing the joint. No less than 6 (!!!) means of ingress are provided with notes on the checks and things required to get in, and the staff is similarly associated in detail with the default NPC arrays. The vault itself is also impressive, for example regarding monster choice: Pyraustas can be found (though the color of the letters of their header is black when it should be white in one of the rare formatting glitches), a bronze asp (fully statted, templated iron cobra) – and traps.

All of these have something in common that I hope to see in PF 2, when it comes, more often: They can be resolved via ROLEplaying, not just by rolling the dice; indeed, that’s the preferred method! The bronze asp has a particular program that allows for full bypassing, the traps can be turned off or avoided by clever PCs – brute-forcing is always possible, yes, but it’s so much more rewarding to do this the clever way. This heist, by the way, is only the first part of this adventure!

Having secured the inheritance, the PC gets an offer from aforementioned forger to building a smuggler’s network – once more, clever observation, with degrees of success and various different means, allows the PCs to recruit, in one way or another, a variety of colorful characters – by free will or coercion. A ragpicker savant ghoststory teller, grindylows (good if you treated them well in Oprhans…), a philandering customs agent and more all can be found – this is basically a “getting the gang together” type of scenario.

However, things don’t end with the smuggling operation – a rival, a very powerful foe, Jaylin Rinegold, has the warehouse seized…and the last man to cross Ms. Rinegold did not fare well. Some inquiries will point the PC to an alchemist, and then, well, it’ll take the application of both the short-lived alchemical brews, marker dye to counter invisible threats, and the skills acquired so far to make it through Rinegold’s mansion: A schedule and reconnaissance details are included, and a guards and wards spells that confuses targets, shrouds doors and cloaks the hallways in mist makes for a super-exciting high-stakes infiltration. Arcane locked doors and those covered by illusions are appropriately noted with glyphs on the GM map for easy and convenient reference. The hands of the former thief that informed the PC btw. still tip toe as crawling claws through the house, making for an interesting souvenir for the poor man. The infiltration here is not piece of cake – the final boss may *just* be an imp (convenient silver provided nearby…), but a final and pretty challenging effect of the global enchantment can have important information slip through the PC’s grasp…and here, the ministerial seal can be found, allowing for the end of the blockade of all those delightful goods, ending the module with the PC having established themselves as a force to be reckoned with.

Conclusion:
Editing and formatting are very good on a formal and rules-language level, I noticed no serious hiccups. Layout adheres to the two-column full-color standard of the Curse of the Crimson Throne plugins, and the pdf comes with nice full-color artworks. The cartography is in full-color as well and features player-friendly versions – big plus! The adventure comes fully bookmarked for your convenience.

Michael Allen and Matt Goodall provide a glorious one-on-one adventure in this offering: “The Smuggler’s Seal” continues to teach the PC to be smart, observant and provides for plenty of different solutions for the problems faced. The learning process is palpable, and the adventure covers a surprising amount of ground, offering more bang for your buck than you’d imagine. I estimate that this could cover up to 8 or 10 full sessions if you take your time with roleplaying conversations, and few players will finish it in under 4 sessions. This has a ton of material to offer and does the heist genre and its various tropes exceedingly well. So well, in fact, that I really wish for the style to continue. It’s not just the challenges or details – it’s the freedom to tackle problems in different ways, the rewarding of roleplaying over simple good die-rolls, that makes this so fun and exciting. This is a worthy sequel to the excellent predecessor and probably manages to exceed its appeal even. If you’re looking for an excellent heist-y module, look not further! As an aside, while it may require lower level PCs and some tinkering with the challenges, I can see this warrant being used for a group as well. It’s that interesting. This receives 5 stars + seal of approval.

You can get this amazing 1-on-1-adventure here on OBS!

Missed “Orphans of the Hanged Man”? You can find it here on OBS!