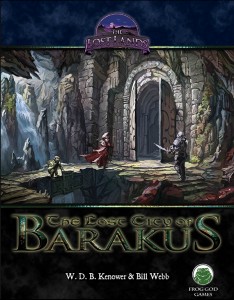 This massive mega-adventure clocks in at 176 pages, 1 page front cover, 1 page editorial, 1 page ToC, 2 pages of SRD, 1 page back cover, leaving us with 170 pages of adventure, so let’s take a look!

This being an adventure-review, the following contains SPOILERS. Potential players should instead read the Player’s Guide and/or jump to the conclusion.

All right, so in case you’re wondering: This is the update of the classic, Ennie-award winning campaign supplement/mega-adventure. The basics are as follows: We have a massive city, Endhome; we have a vast stretch of wilderness surrounding it. The players are here. Go. This is pretty much the textbook definition of a massive, wide-open sandbox – something that renders this massive module a huge playground: From the exceedingly-detailed city of Endhome (including city statblocks, btw.!) to its environments, there is a lot of grounds to cover.

What do I mean by “exceedingly detailed?” Well, beyond the environments coming with a key-less, player-friendly hex-map, the city itself sports more maps that you’d imagine feasible for a book of this size: How many cities out there, for example, do you know that actually do have full maps for the canalization they sport? Indeed, even hexed ones so you can, theoretically, hex-crawl through the network of tunnels? Better yet, how many do you know that actually sport multiple mini-dungeons inside? But this level of detail not only is provided for below the streets – indeed, the fully-mapped temples of local deities and a whole mansion can also be explored…for there are whispers of death cults and even vampires having their home within the very walls of Endhome…

Now granted, there are other hyperdetailed city-sandboxes out there, but few that also manage this lavish level of detail beyond the confines of the city walls – there is a lot to find and explore outside of the walls of Endhome. Whether to stop the notorious bandits that have taken to harassing the roads, dealing with the stupid giant shambling through the hills or braving the small, but still deadly dragon that scours the lands, there is a lot to do; perhaps, the PCs are intrigued by the door-less wizard’s tower they heard about in the player’s guide and want to scale and explore it…or perhaps they stumble over a sinkhole and wan to lower themselves down, past the deadly mold growing down there, to explore the caverns below? The fountain of Freya is supposed to be somewhere in the woods and ghouls and worse room the wilderness, with a shrine to dread Tsathogga being once again a mechanical highlight, as a dire boar turns out to be a were-boar cleric! Mysterious crypts, haunted hovels and hidden treasure all await intrepid adventurers stumbling over secrets ancient and old. What about the friendly alchemist out there – is he all he seems to be? No trip beyond the walls of Endhome will be boring – that, I can guarantee!

In fact, this mega-adventure does sport a very prevalent leitmotif that has since then become one for the Lost Lands-setting: A feeling of a world that has moved on; once, there may have been empires, a structure, a geopolitical struggle – but now, the world is on the verge of becoming all wilderness. Civilization seems to be in decline and every rock and hovel seems to be hiding a piece of an age long gone, a piece of the puzzle, a sense of antiquity. Obvious danger may lurk outside, yes, but even beneath the veneer of civilization, where still maintained, there is no rest – you will never lose the feeling of something sinister brewing beneath the surface, of a calamity just being a step away. This brooding melancholy suffuses the whole writing, providing a sense of thematic identity far beyond anything you’d consider evident or obvious; the effect is subtle, but utilized in an extremely smart manner, for the caverns of the massive dungeon that hide Barakus and the ruined city itself further amplify this theme.

Let me reiterate: Barakus once was a radiant city – until one of its numerous wizards, Devron, turned lich. The city was unified in its struggle against the lich and crafted a sword to bring him low. Not one to wait for his demise, Devron crafted a helm to regain, eventually, his power and, from the prison into which he was banaished, expended a significant portion of his power. Before the sworn champion could destroy him, the stone of madness thus conjured crashed into the city, turning its denizens against themselves and destroying the once proud city-state. Thus, the legendary sword was lost in its own sanctuary, to never be used; thus the shield never was found; and thus, the ruins of the erstwhile city still hold not only the well-sealed prison of the (temporarily weakened) lich, but also the sword of kell, the means to reinvigorate it and the dread stone of madness – all while Devron still hungers for his power, for the helm to restore him, for freedom – it is this that can be considered to be the main quest of this massive adventure, though, frankly, it is as much the main-quest as some others herein. The brilliant component about this one, though, is the fact that the dungeon that now contains the city’s remnants is diverse and huge – several levels, some parallel to one another, some sporting maps that cover 2 pages, render this dungeon a significant challenge – better yet, the whole complex manages something only rarely seen.

The indirect story-telling one associates with game like Dark Souls: When ephemeral voices ask you about Devron to enter his domain, when lethal puzzles loom, when strange devices can be collected to illuminate the city’s “flames” to bring full power back to the sword, when the deciphered warrior’s prayer actually has an effect beyond flavorful fluff – it is then you’ll note the extent of this book’s atmosphere. Add to that a significant array of terrain hazards and unique adversaries and you will literally have excellent content to last you a couple of months, perhaps even a year. Oh, and one thing: The player’s guide immensely facilitates the process of running this one, allowing the GM to avoid the necessity for hours of exposition and establishing shots – it literally does that for the GM and renders running this even more smoothly than in its 3.X iteration.

Editing and formatting are top-notch, I noticed no significant glitches. Layout adheres to Frog God Games’ elegant 2-column b/w-standard and the pdf comes fully bookmarked for your convenience. The book sports numerous pieces of awesome b/w-artwork and the maps the PCs can conceivably get are printer-friendly. As a nitpick, I would have loved to see player-friendly maps for all areas, since I (and a lot of GMs I know) like cutting them up and then handing out the respective areas as the PCs explore the place, but you can’t have everything, I guess. The hardcover is a beautiful book with FGG’s excellent binding and high-quality paper – this is a book made to last.

W.D.B. Kenower and Bill Webb’s Lost City of Barakus is perhaps one of Necromancer Games’ classics that is closest to the quality and style the current Lost Lands adhere to. I may be mistaken, but when I look at this mega-adventure, I can see how Slumbering Tsar, Dunes of Desolation and similar tomes among FGG’s superb catalogue drew upon established flair and further expanded it. Endhome and its surrounding area are, hands down, the most detailed low-level sandbox I currently know of: Massive in scope and ambition, there are literally hundreds of hours of awesome gameplay herein. But that was true before. The PFRPG-conversion ranks among the better ones as well – with alchemists and several classes and builds getting more than just the required face-lift. The dungeon and its organization is also slightly clearer and thanks to the superb player’s guide, you spend much less time with exposition and have more time for proper adventuring.

So is this better than its previous iteration? Yes, in my opinion, it is – the frog god crew has done a great job transporting this to PFRPG. This is an absolutely stellar sandbox and one of the low level modules that should be considered to be a rite of passage, a great first glimpse at the Lost Lands and what makes the setting awesome. In fact, were this 3.X, I’d still be gushing on and on about how awesome this book is – the only reason I’m not, lies in the lack of player-friendly maps for every environment and, more importantly, one book: Sword of Air. While higher level, Sword of Air has pretty much raised the bar so high, it is very hard to not acknowledge its influence. That being said, guess which sandbox I’d recommend to lead towards this legendary module? Yes, you’re reading the review of it. My final verdict will hence clock in at 5 stars + seal of approval. If you have not yet played this gem, check it out – it is one glorious beast.

You can get this glorious sandbox/setting here on OBS and here on d20pfsrd.com’s shop!

Prefer the old-school Sword and Wizardry-rules? You can get that version here on OBS and here on d20pfsrd.com’s shop!
Endzeitgeist out.