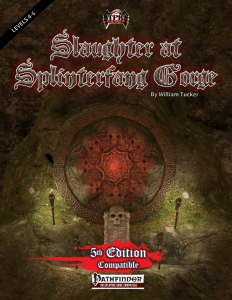 So, dual-statted – what does this mean in the context of this module? Basically, throughout the pdf, you’ll have black boxes that note environmental effects for the PFRPG-system, red boxes that do the same for 5e – so yes, actual strategy-relevant terrain and environmental effects can be found within. The statblocks adhere to a similar dual-formatting, though it should be noted that the 5e-statblocks don’t italicize the respective special abilities and actions; similarly, e.g. Hit is not italicized – this remains a cosmetic glitch, though.

Magic items, where encountered, are presented for both systems – big plus: The respective rules-language is proper and well-done for these, though there are a couple of instances, where the wording is a bit wonky – the cloak of blood-matted fur’s PFRPG iteration’s wording allows for stacking with DR and energy resistance due to its verbiage, for example – a reason I’d frankly not allow it for PC use. We have a few minor deviations from rules-syntax and semantics here, but as a whole, this should work. It should be noted that the statblocks for both systems have been made with care: You won’t see blandness here, with PFRPG using interesting archetype-combos and 5e getting unique tricks for the respective bosses – I’ll touch on a particularly neat example in the SPOILER-section below.

PFRPG groups using TPK Games’ pretty amazing Laying Waste-system will also enjoy that this book is actually compatible with the system. There are 5 feats for PFRPG used in the builds of the NPCs – these are not intended necessarily for player use and their rules-language offers some deviations from standard formatting conventions, mentioning “CHA modifiers” and similar, mostly cosmetic hiccups. That being said, the feats do provide rules for visceral trophy-gathering etc. for the adversaries and also net an increase in deadliness for the goblinoids faced, which makes this okay as a NPC-toolbox. An archetype for goblin rangers that specializes on ambushes and employs some of these rules can also be found here for PFRPG. 5e has the analogues of these options, btw., baked into the respective critter features and options.

It should also be noted that a brief deity write-up for the deity of bugbears, Druj Headsplitter, has been included – however, neither in PFRPG, nor in 5e do we get the full extensive coverage; no obediences or subdomains, no new 5e-domains…but the fluffy write up remains detailed enough to use the fellow.

Oh, one more thing: The module does sport scaling options for the encounters contained within, which is a nice plus if you’re looking for a tougher challenge. Kudos there!

It should be noted that the adventure features several hooks to draw the PCs in and also sports weather for 4 days – smart players hopefully know how to make it work to their advantage. Get it? Sorry, I’ll punch myself for that groan-worthy pun later.

This being a review of an adventure, the following review will contain SPOILERS. Potential players should jump to the conclusion.

The gorgeously-mapped Perinade forest is idyllic…and then, the module happens. The PCs happen upon an armed altercation between goblinoids and elves, hopefully saving the elven ranger Ralyuka from the attacking goblins. It turns out that the Garnet Gale Aurora is approaching, a strange phenomenon that doubles as a commemoration of the last triumph of the elves against the goblinoids, when they narrowly snatched victory from the jaws of defeat by slaying the last warlord of the goblinoid tribes. The green-skins have taken the elven children in their devastating raid – and so, the first major quest of the module will be to save the kids.

In order to do so, though, the PCs will have to traverse the Perinade on the trails of the nasty goblins and their bugbear masters; and the forest is not a cozy place. Random encounters, a self-serving goblin shaman/warlock chief, pit traps with goblin dogs…and ultimately, the PCs will encounter Ghrekjar…and the other warbands. Basically, the PCs will have to face multiple warbands with unique and potent leaders. These combat-centric encounters also act as a kind of guidance for the PCs – they establish the goblinoid host as a credible threat that is not to be underestimated.

Once the PCs have had a chance to test their mettle against the powerful, deadly goblinoids, they’ll realize that, so far, they’ve basically dealt with the stragglers – in order to free the kids, they will have to brave a massive, fully mapped war camp of the greenskins. The camp, in short, with notes on perimeter security and a plethora of deadly adversaries, is nothing for the faint of heart – beyond evidence of the carnivorous tendencies of the bugbears and goblins, the PCs encounter a truly horrific place, one where e.g. freeing a bear may provide a distraction and means to actually triumph against the odds.

This, however, is not the climax of the module – instead, the PCs will have to travel to the eponymous Splinterfang Gorge (fully mapped) and defeat a bugbear cleric and his ghouls there, for he is seeking to tap into the mystic aurora via the sacrifice innocents to empower dread Spragnokk, a bugbear mummy and the BBEG of this module: At a potent AC 28 in PFRPG (in his base form), this guy is an impressive boss – and the longer the PCs dilly-dally in either version, the more potent this guy will get: A progression-chart has been provided to increase the power of this deadly foe in various steps. And yes, the 5e-version of the guy comes with legendary actions to really kick your PC’s behinds – and yes, his progression does include special ability gains. And yes, quick PCs can actually save all elven infants from their dread fate at the hands of the undead menace…

Editing and formatting are very good on a formal level; on a rules-language level, the pdf is slightly less refined, but should pose no problems to most GMs running it. Layout adheres to a 2-column standard with a grey background. The black and red boxes with white text aren’t exactly printer-friendly, but oh well. The pdf offers a variety of nice full-color artworks and b/w-artworks of the goblinoid bosses and proceedings. The maps are in full-color and really nice…but unfortunately, they come sans player-friendly versions without keys. If you want to use these for VTT, you’ll be in a bit of a bind. Particularly the camp’s infiltration would have benefitted greatly from a player-friendly version.

William Tucker, with additional content by Brian berg, Egg Embry and Matt Everhart, has written a DEADLY module. Goblinoids in both D&D 5e and PFRPG have lost a bit of their traditional, savage and despicable flair and this module embraces it: These goblinoids are thoroughly loathsome critters you will want to murder-hobo, hardcore. The module does feature some descriptions that are a bit graphic, but nothing you won’t be able to scale down for younger audiences or groups that prefer a less dark type of fantasy. Story-wise, there isn’t that much going on here, but I found myself enjoying this module more than I thought I would.

You see, usually, dual-stat supplements have a pretty big issue, namely that they feel like they have been primarily made for one system; one set of statblock tends to fall flat, some rules feel a bit wonky…and it is my honest joy to report that this module manages to present a BRUTAL challenge for both PFRPG and 5e, both with the respective system’s own mechanics. In short: This book actually manages to get the dual aspect right…and that is VERY important here, more so than in comparable modules. Why? Well, the main draw here would be the challenging combats and adversaries. This supplement very much stands and falls with the potent opposition the PCs will have to face and, as such, stands in the proud tradition of hard, challenging TPK Games modules. It is actually a module, where triumph is something to be proud of.

Particularly the infiltration and the HARD boss fight in the end should make even experienced players sweat. That’s a good thing, as far as I’m concerned.

While this is not perfect, I consider the module to be a surprisingly enjoyable and diverse challenge – the unique leaders and sub-bosses that can be found herein make this module feel very much alive, fun and diverse, in spite of the PCs mostly killing various goblinoids throughout. That being said, the lack of player-friendly versions of the nice full-color maps represents a significant drawback, as far as I’m concerned. Hence, my final verdict will clock in at 4.5 stars, rounded down for the purpose of this platform. If you don’t mind that, round up instead…and if you always wanted a module will really EVIL goblinoids…well, there you go! Recommended!