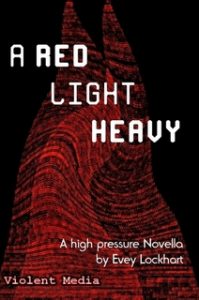 This novella clocks in at 59 pages if you take away the usual editorial etc., though it should be noted that there is a lot of blank space throughout the book, courtesy of the unique concept of the book.

This review was sponsored and requested by one of my patreons.

All right, and now for something completely different: “A Red Light, Heavy.” is an experimental novella by Evey Lockhart, one set against a rather unique background. The prose within the pages of this novella represents the reality depicted within in formal and functional criteria. What do I mean by this? Well, as the back cover notes: “The Sun has betrayed us” – it has become red, hateful and hostile to life, and like in e.g. the Soma-video-game, the survivors attempt to endure at the bottom of the sea, far away from the baleful, red glare of the sun.

The red light and its effects are a leitmotif to the novella, for the concept of colors itself has taken on a rather esoteric quality; you see, the sea quakes and other malfunctions of the subaqueous refuge of humanity’s remnants has left the undersea station perpetually locked in the revolving emergency lights casting their red glow. Now, as most of my readers will be familiar with, overexposure to a particular color can influence your mood; in the case of this novella, this means that a certain violence and savagery represents the dominant aspect of the condition humana in the book, though the association with “humane” or human may be far-fetched for the most part.

The most interesting aspect that stems from this internal leitmotif ultimately is experienced by the reader in the structure of the book: There is a 3-page and a 4-page subchapter – and those are the longest chapters contained within; all other chapters are briefer, evoking a sense of revolving light and darkness: We get a brief glimpse of characters and what they’re doing/experiencing (which is often rather dark and violent), before darkness once again swallows them and forces up to see another character in the next flash of light.

This sense of fragmentation of plot and, well, the life depicted within, also is further enhanced by the second leitmotif, namely that of heaviness, of the massive pressure of the ocean’s floor and tons of water held barely back; of air that is moist, warm and unpleasant to breathe. The pressure of the environment depicted is represented by the often condensed and deliberately staccato-like prose that we can find within. In an interesting, further emphasis of atmosphere, the prose for the respective characters seems to mirror to a degree the devolution they experienced.

So yes, this is a “high-pressure novella,” as the cover states and as a piece of experimental fiction, it manages to evoke the atmosphere it strives for, which is, for the most part, as the back cover states “Hope is dead. Humanity endures.” The relentless bleakness, or rather red, heaviness of the devolved human society within the setting, the strange changes and abilities, the reduction to animalistic behavior, is depicted in a rather unflinching manner. At the same time, the structural peculiarities in service of the concept also can be construed to be a detrimental factor if you read this with an emphasis for narrative structure. The oscillation of characters, the brief flashes we get of these desperate survivors, ultimately means that we never linger on one character for long. While intentional and system-immanently required for the atmosphere the book evokes, this makes it hard to relate to any of the struggling survivors. It also demands that the reader bears in mind the names of the respective characters. In an absence of much space to develop them, it is crucial to track which characters do what.

As for the element of tension, we have the struggle for survival; the potential collapse of the whole environment and…what probably galled me most about the book.

This is a major SPOILER, so potential readers should probably jump to the conclusion.

Yeah, well, beyond the struggling survivors that cling to their humanity, there is an elitist cadre of “proper” humans lording over everything, attempting to retain control. The creatures and folks we witness throughout the book are the dark boogeyman, the feared degenerates. The back cover, in short, kinda lies. This society has its issues and post-apocalyptic rules, yes, but the presence of such a group somewhat trivializes the aspect of degeneration and the struggle of the characters. This is further exacerbated by the end, which actually does provide hope for a perpetuation of humanity and a reclaiming of the surface world. This ending feels like a bad cop-out to me, like a deliberate glimmer of hope in a book that works primarily due to the absence of hope and abject, disquieting savagery of life. The presence of this society, the retaining of knowledge etc., ultimately marginalizes the struggle, and, ironically, the exceedingly well-executed aspects of the formal peculiarities of the prose.

Now…here is the grand question – should you read this? Well, if you like experimental fiction that reads differently, if you can enjoy structural peculiarities for their own aesthetics, then this may well represent a book you will enjoy. If you expect an exciting plot executed in a more traditional manner, then this will probably not do anything for you. If you’re looking for novelty in structure and execution of the prose and enjoy a creative, interesting take on a bleak post-apocalyptic setting, then you may well derive some pleasure from this novella, courtesy of its interesting experiments and per se unique execution. It should be noted, though, that you probably won’t take longer than a few hours of concentrated reading to get through this book – the oscillating, staccato-like flashes illustrating the characters mean that there is quite a lot of blank space, making the reading experience a brief and intense one – considering the concentration you should bring to the table and the formal and structural idiosyncrasies of the book, that does work for the benefit of the novella, though.

While I don’t consider the novella to be perfectly enjoyable for the average reader, particularly readers that enjoy sojourns into the experimental, both from a structural as well as a setting-perspective, may well like the book for its stringent execution of prosaic form and presentation mirroring the reality of the setting. As a whole, I count myself among the latter readers; while the plots never caught my attention and while the end did strike me as unfortunate, I enjoyed myself while traversing a savage, merciless world defined by short-breathed heaviness and red lights for the atmosphere that this novella managed to convey. Thus, my final verdict will clock in at 3 stars.

You can get this experimental novella here on lulu!