Quests of Doom: Between a Rock and a Charred Place (Patreon Request)

Quests of Doom: Between a Rock and a Charred Place 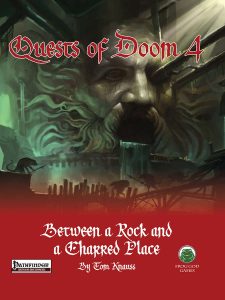 This review was requested by my patreon supporters, to be undertaken at my convenience – and I wouldn’t have reviewed this one usually. Why? Because the module is the third part of a series of adventures, which were first published in the criminally-underrated Mountains-sourcebook “Mountains of Madness.” Full disclosure: I was a backer of the KS to fund Mountains of Madness, since I genuinely consider the Perilous Vista books by Frog God Games to be some of their finest work for PFRPG. I briefly talked about the module back then, but my patreon supporters wanted a more detailed analysis of the module in question, so here we go!

This adventure is intended for 7th level characters, and, as always for Frog God Games modules, a well-rounded group is recommended. As always, we have read-aloud text for key-scenes and dungeon rooms, but the amount provided is on the low side of things.

The module is steeped, particularly in its background, in the lore of the Lost lands campaign setting, particularly the Stoneheart Valley. Unlike the previous two modules taken from “Mountains of Madness”, this one is harder to implement in another campaign setting – you’d need a mountainous region with a pretty specific political framework here. It’s not impossible to do, but it requires a bit of work. It should also be noted that this adventure has strong ties to the final of the modules taken from “Mountains of Madness”, which would be “War of Shadows.” I strongly encourage running these two back to back. If you’ve run “A Little Knowledge”, you’ll have a good starting point, for the actions of the PCs there should have made for a convenient reason for why the otherwise pretty xenophobic Clan Craenog’s High Thane has invited the PCs to the dwarven city of Erod Flan, we set our play – for this is a somewhat Shakespearean yarn!

All right, only GMs around? Great! So, you need a reason why the High Thane would invite the PCs to his city to be honored; as per default, that would be because they saved the beleaguered garrison of Burvaadun from the undead assaults conducted by the an ancient arch-mage. The PCs arrive in Erod Flan, get a tour, chances to pick up rumors, etc., before the PCs get their audience with the High thane. During all of this time, the PCs should well pay attention, for otherwise, the complex background story may become puzzling – the feast, ultimately, is rocked by a massive explosion that had the chance to kill the entire congregation!

While the ancient thane and his associates quickly deduce the dark folk survivors of the battles the dwarves once led as likely culprits, filling the PCs in on this ancient foe, but the matter at hand is more complicated. At this point, the PCs will be asked to dive down into the formerly-sealed quartz-mine. The PCs are accompanied by stout dwarves, at least potentially – and that is where the module becomes interesting.

You see, the dwarves are no chumps – they have secured the entrances to the dark folk regions with really deadly traps, many of which glyph-based – how the GM handles these will greatly influence the difficulty of the module. Warned PCs have obviously an easier time dealing with those; here’s the thing, though: There is a traitor among the dwarves, one carrying a grudge and ambition from long past; I’m consciously omitting the details here to avoid giving away the deal, but said individual has VERY detailed tactics provided to conceal his intentions, and this individual, obviously, also wants to “thin the herd” of people between him and his goal. How this dynamic villain is handled, is very cool.

Indeed, handling of the NPCs is crucial, for the module tends to throw a lot of cross-invisible-line-for-damage traps at the PCs, and the ones on the dwarven side are brutal; the ones in the dark folk complex obviously aren’t telegraphed this manner, but they DO follow an internal logic, so clever and experienced groups may avoid them.

Said traitorous individual, btw., has a conspiracy going on with none other than the leader of the dark folk – and the exceedingly intelligent hobgoblin warlord Grugdour, ultimately with the goal of elevating the traitor to the seat of the High Thane, and a breaking of the stalemate between hobgoblins and dwarves…hence the assassination attempt below. The fate of the traitor can go a lot of ways, by the way – but in the end, the module will have one loose end, namely Grugdour’s and his gambit for supremacy!

Editing and formatting are very good on a formal and rules-language level. Layout adheres to Frog God Games’ two-column b/w-standard, and the pdf sports two solid b/w-artworks. The pdf-version comes fully bookmarked. The b/w-cartography is nice and detailed, as usual – alas, like the previous two adventures, the stand-alone version is missing the player-friendly maps – particularly grating, since these omitted the tell-tale trap-indicators in the original version of the adventure.

Tom Knauss’ “Between a Rock and a Charred Place” loses some of its impact when considered as a stand-alone venture; “A Little Knowledge” provided a great segue into the module’s scenario, and without that lead-in, it’s somewhat harder to set up. Furthermore, the module essentially requires the sequel for a satisfying resolution. It remains a good module, but it’s one that I strongly suggest playing these modules in sequence. All in all, my final verdict for this stand-alone version clocks in at 4 stars – I recommend getting the Mountains of Madness book over this stand-alone iteration, if you have the option.

While my review is based on the PFRPG-iteration, there are two more versions: